Gerard Hutch was driven over and back across the border into Northern Ireland by a former Sinn Féin councillor three times in just over a month after the murder of David Byrne at the Regency Hotel more than six-and-a-half years ago, the Special Criminal Court has heard.

The head of the Garda National Surveillance said that last Saturday, gardaí found a working copy of data from a tracker that had been placed on Jonathan Dowdall's landcruiser

The data was found on the third computer of seven that had been due to be destroyed in the coming weeks.

"It had been destroyed off the master server," Detective Superintendent Eugene Lynch told the court.

"If these computers had been destroyed we would have had nothing."

He also testified that the tracker was being monitored live but he insisted that gardaí did not monitor it when it crossed the border because they had no jurisdiction to do so.

Defence Counsel Brendan Grehan said he was sceptical of that claim pointing out there was nothing to stop gardaí from monitoring it while the landcruiser was in Northern Ireland.

He said the PSNI was conducting surveillance in Northern Ireland.

He also told the court that on 20 February 2016, two weeks after the murder of David Byrne, Jonathan Dowdall drove Mr Hutch across the border at the Carrickdale Hotel at 8.45am and back into the Republic at 10.51am.

Just over two weeks later, on 7 March 2016, the surveillance officer said Jonathan Dowdall again drove Mr Hutch across the border at the Carrickdale Hotel at 3.17pm, crossing back after seven-and-a-half hours at Aughnacloy in Co Tyrone at 10.50pm.

The court also heard evidence this afternoon from Assistant Commissioner Orla McPartlin, who authorised the destruction of the tracker data which was recovered over the weekend.

The Assistant Commissioner told the court that she was presented with a spreadsheet and 87 files of which she examined a sample of three, none of which related to the tracker data on Jonathan Dowdall's jeep.

She said she asked and had been assured that nothing was required to be retained and that had she had "the slightest inclination" that material relating to this trial was required she would "absolutely not" have authorised the destruction.

AC McPartlin also said that she directed that a thorough search be carried out to see if they could be recovered and a working copy was discovered over the weekend.

Earlier, the court heard that gardaí found data from a tracking device which had been placed on Jonathan Dowdall's vehicle, which they said last week had been destroyed.

The data had been sought by Mr Hutch’s defence counsel, but a senior officer told the court that it had been destroyed before this trial began.

Ciaran Hoey, the former head of the Garda National Surveillance Unit, testified that he signed an order in February this year authorising the destruction of the data, because it was six-and-a-half years old and the law required him to destroy it after three years.

Senior counsel Sean Gillane told the three judges today that an extensive operation, which included the Cyber Crime Unit, was being conducted by An Garda Síochána to see if the data could be retrieved.

In the course of that operation, he said, desktops that had been listed for destruction were discovered and examined and "a working" copy of the material requested was located.

He said both he and defence counsel needed time to examine the material and the case has now been adjourned until this afternoon.

"If it appears what is lost is now found, I will need a bit of time to see where we go now," Defence Counsel Brendan Grehan told the court.

The data relates to a tracker, which was placed on Jonathan Dowdall’s land cruiser.

The court has already heard that he met with a member of the Real IRA in Derry a month before the murder and then is alleged to have driven Mr Hutch to Derry two weeks later.

Gerard Hutch, 59, who is known as The Monk, with an address The Paddocks, Clontarf, Dublin 3, denies the murder of Kinahan Cartel member David Byrne during a boxing weigh-in at the Regency Hotel on 5 February, 2016.

Mr Hutch's two co-accused, 59-year-old Paul Murphy of Cherry Avenue, Swords in Co Dublin and 50-year-old Jason Bonney of Drumnigh Wood, Portmarnock have pleaded not guilty to participating in or contributing to the murder of David Byrne by providing access to motor vehicles on 5 February, 2016. 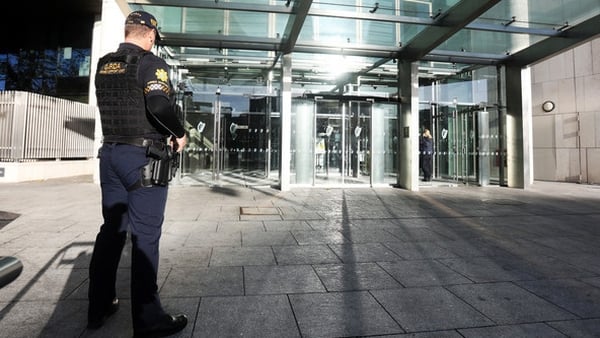