A former RTÉ journalist has been jailed for 15 months for sexually assaulting a woman as she slept.

Mícheál Ó Leidhin, 38, who worked as a political reporter for Raidió na Gaeltachta, was found guilty by a jury in May.

The victim told the court her mind and body had been violated and she had lost her place in the world. She said she would have to deal with it for the rest of her life.

Judge Karen O'Connor granted a request from his lawyers to allow him to begin his sentence on Monday morning to give him time to lodge an appeal before the end of the legal term on Friday.

The court heard Ó Leidhin and the victim met on a night out in May 2018. They went back to Ó Leidhin's house in the early hours of the morning, where they engaged in consensual sexual activity.

However, the woman said she told him she did not want to have sex as they had no contraception.

The woman said she was confused and annoyed and told Ó Leidhin it was weird that he had done this while she was asleep.

She told the court she absolutely did not consent to it.

They went back to sleep and Ó Leidhin later gave the woman a lift home.

The court heard they spoke later that day via a phone call and texts in which the woman expressed her unhappiness about what had happened between them.

Ó Leidhin called over to her house that evening and they spoke for about an hour. Prosecuting counsel Michael Delaney said they agreed to differ about what had happened the night before and there was no contact between them after that.

The woman reported the incident to gardaí a year later.

In a statement to gardaí, Ó Leidhin said that when he woke up on the night he had wanted to resume the sexual activity they had been engaged in earlier.

He said he had been trying to wake the woman to continue "fooling around". He said she asked him to stop and he did.

Judge Karen O'Connor said she had adjourned the sentencing as Ó Leidhin's defence counsel, Bernard Condon, had indicated that his client accepted the jury's verdict.

This was the first indication of any acceptance of wrongdoing and she had wanted to explore this further through a probation report.

The judge said the aggravating factors in the case were the impact of the offence on the victim, who had spoken to the court in a compelling manner about her trauma and her sense of being violated when she was asleep.

The judge said the fact that the woman was asleep and in the accused's home when the assault took place was a breach of trust and the offending continued to have an impact on the woman.

In mitigation, she said Ó Leidhin was of previous good character. He was a hard working scholarship awarded student, who was very highly qualified and had an impressive work history.

His friends and family described him as a good and supportive friend and said he was extremely remorseful and contrite.

Judge O'Connor said the probation report considered him to be a low risk of offending in the future, but she said it indicated that he accepted the verdict and not the import of the verdict. His remorse appeared to relate to the victim's sense of hurt and upset because of her perception of what happened.

She said she had considered all the factors in what she described as an "unusual" case, but she said she had decided part of the sentence would have to be custodial.

Judge O'Connor imposed a sentence of 18 months, but suspended the final three months.

She granted an application by lawyers for the defence to postpone the beginning of the sentence until Monday morning to allow him to lodge an appeal.

Ó Leidhin is to present himself at Mountjoy Prison at 10am on Monday.

Ó Leidhin's partner, who is supporting him and gave a testimonial on his behalf to the judge, became upset after the hearing ended.

At the sentence hearing in May, the woman told the court she wanted to document the impact sexual violence had on her. She said she was sexually violated while sleeping.

"This convicted man used sexual violence as a method of violence towards me," she told the court.

She said he had violated her body, her mind, her sense of self and her sense of security in the world. It had impacted, she said, on every facet of her life.

The woman said the night of the assault was the last night she would ever go to sleep believing she was safe and the thought someone would sexually violate her while sleeping was beyond comprehension. She said the stress and fear did not end when the attack ended and it had replayed again and again. 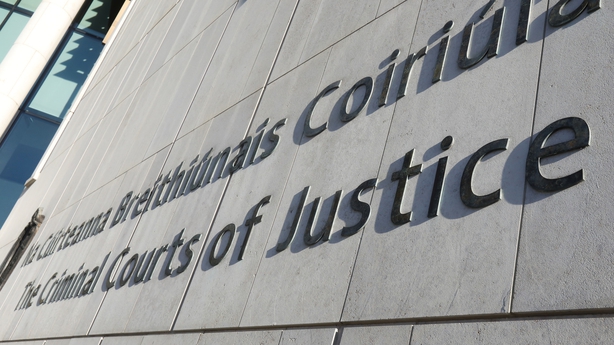 In the aftermath, she said she felt grief and distress beyond explanation and felt totally disconnected from reality. The woman said relationships with her family had become strained. She said she had lost her social circle and many friends, and had not been able to progress in her career. She described to the court becoming depressed and suicidal and making an attempt on her life.

The woman said she believed that if society supported victims better, she would not have had to deal with such devastating losses.

The only person responsible for the relationships and friendships she had lost was Ó Leidhin, she said, and yet she had been shamed and blamed because of what he did to her.

She said she had to pay for counselling sessions and doctor's appointments.

The woman said it had taken three years from the time she reported the assault before the trial took place.

This was completely unacceptable, she said, and forced victims of sexual violence to be stuck in a state of trauma. Giving evidence and being cross-examined was unbelievably distressing and she felt she was going to have a heart attack.

She said that giving her victim impact statement did not put an end to the trauma for her, and she would have to deal with it for the rest of her life.

The woman said she would not forget it, but she would not let it define her. She said she would leave everything said to her in court that was unfounded and untruthful, as well as all her pain, guilt, silence and shame, with the sexual offender who was sitting in court and was responsible for it all.

Judge O'Connor thanked the woman for speaking so eloquently about the ongoing impact of the assault and the dignified manner she dealt with the process.

Mr Condon told the court this was a once-off incident. There were no other aggravating features, such as a disparity in age or a blood relationship.

He said his client accepted the jury's verdict and had expressed his remorse and regret. He had a strong work record and had never come to garda attention before or since this incident, he said.

Mr Condon said Ó Leidhin had now lost his job and would have difficulties finding a job in the future. He would also be on the sex offenders' register, which he said was a substantive punishment.

Mr Condon submitted that this offence belonged on the lower end of the spectrum and he urged the judge not to send his client to prison. He handed in letters of support from his current partner and his parents.

The court heard Ó Leidhin, who lives in Artane, is originally from Ballinskelligs in Co Kerry and had been employed by RTÉ as an Irish language political journalist. He has no previous convictions.

In a brief statement issued after the sentence hearing, RTÉ said Ó Leidhin was no longer employed by the company.