A man who used a wooden post to strike a woman on the head during an anti-lockdown rally last year has been jailed for two years.

He said the behaviour of Quinn and his associates after the attack was reprehensible.

Dara Hayes BL, prosecuting, outlined to Dublin Circuit Criminal Court how on 12 September last Ms Kamikaze, 58, had attended a rally in the city centre in support of frontline workers.

On the same day a "yellow vest" protest was taking place near the Custom House and protesters from this event were later making their way towards Kildare Street, where a further protest against Covid-19 lockdown regulations was taking place outside Leinster House.

Reading from her own victim impact statement, Ms Kamikaze said that after being struck by the post she fell to the ground.

She said her presence and the presence of her friends was then highlighted by a speaker from the platform and hundreds of protesters then turned to them. 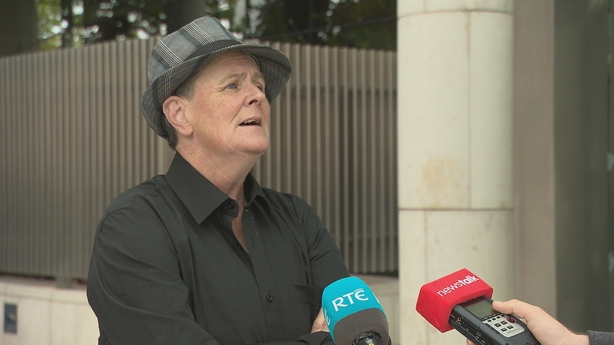 "The entire crowd turned towards us. They swarmed towards us with the aim of driving us off the street," Ms Kamikaze said.

She said she lay on the ground for ten seconds listening to the protesters "baying" for her blood.

"I thought I was about to die or receive life-threatening injuries," Ms Kamikaze said. She said she was able to get up before the first angry boot could hit her face.

She said when she got back to her feet she stood for around five minutes "to exercise my right to stand in the street".

Ms Kamikaze said blood was running down her head and face and soaking her clothes as protesters shouted a tirade of abuse at her and her four friends, who included a teenager and two women in their 40s and 50s.

She said she was grateful that Quinn's "cudgel" struck her head and not the head of a more vulnerable person and that Quinn "hurt himself and his movement far more than he hurt me".

Video footage of the assault and the mob's behaviour afterwards was released online and Ms Kamikaze said that this meant "a lot of people came to their senses about how dangerous it is to ignore far-right protests".

She said the footage caused people to consider "the evil in the heart of people who would beat people off the street for their gender or ethnicity".

Ruth O'Rourke, also known as Izzy Kamikaze, speaks to media outside court after a man who used a wooden post to strike her on the head during an anti-lockdown rally last year was jailed for two years | https://t.co/5xt7PYFq2y pic.twitter.com/flwVIHOqHk

Justin McQuaid BL, defending, told the court that his client had instructed him to offer a public apology to Ms Kamikaze.

He asked the court to note a Probation Service report which stated that Quinn has displayed some "level of victim empathy" and is remorseful.

Mr McQuaid said Quinn takes full responsibility for his actions and that is his reason for his early plea of guilty.

He said his client suffers from mental health, takes anti-depressants and that alcohol is a feature in his life.

Domestic violence and alcohol featured in his upbringing, Mr McQuaid said, but added his client is taking steps to address his issues.

Judge Nolan said that everyone is entitled to demonstrate but that the injured party was perfectly entitled to be on a public street.

He said this was a serious assault, partly as a result of the motivations. He said Quinn has shown a propensity for violence in the past and imposed a three-year prison term.

He suspended the final year on certain conditions.