A hospital in Co Louth has apologised to a 35-year-old woman who is terminally ill with cervical cancer after a failure to properly investigate and treat her condition.

Eileen Rushe, from Termonfeckin in Co Louth, settled her case against the Health Service Executive today.

The High Court heard that her case was one where CervicalCheck had worked and her smear tests had been read correctly.

However, there was a failure by the Louth County Hospital in Dundalk to properly investigate and treat her condition. If this had been done, her cancer could have been cured.

After her settlement, Ms Rushe urged people to avail of any screening services available to them and said "screening programmes and vaccines save lives".

Ms Rushe also called on the Government to legislate, in the wake of the Supreme Court judgment in the Ruth Morrissey case, to allow plaintiffs to claim damages for the future care of their children.

She has a 14-year-old son whose father died in 2017. A separate claim will be lodged on his behalf at a later date.

The terms of her own settlement were not made public as no ruling was required by the court.

A hospital in Co Louth has apologised to a woman who is terminally ill with cervical cancer after a failure to properly investigate and treat her condition.

Eileen Rushe has urged people to avail of any screening services available to them | Read more: https://t.co/B8eFJ7Nf9g pic.twitter.com/RQNvsyLZm1

The court was told that in April 2017, Ms Rushe had a cervical smear test, which was reported as having abnormalities, and recommended she be referred for further investigation.

Her GP referred her to the North East Regional Colposcopy Service at Louth County Hospital in Dundalk.

On 30 August that year, she attended for colposcopy and a biopsy, and a follow-up plan for six months' time was put in place.

The following year, more tests were carried out and reported as showing abnormalities, but it was not until December 2018 that an MRI was carried out, which showed she had invasive cervical cancer stemming from a large tumour.

In her claim for damages against the HSE, her lawyers said her condition could have been diagnosed up to a year earlier.

They said if proper investigations and treatment had been carried out she would have had a 95% chance of survival. Now, she is terminally ill and her prognosis is poor.

In court, an apology was read from Fiona Brady, General Manager of Louth County Hospital Dundalk, on behalf of the colposcopy unit and the hospital.

Ms Brady offered her "most sincere apology for the failings which occurred" while she was under their care.

It continued: "I understand this has had the most serious consequences for you and for that I wish to offer you and your family my heartfelt apologies.

"I appreciate that this has been a very difficult time for you and your family and I hope the resolution of the proceedings today gives you some comfort."

Afterwards, Ms Rushe said 2017 had changed their lives forever. Her son Seamus lost his father and mistakes were made in her care.

She said today's outcome was "bittersweet, but the result is ultimately the reason why I started this journey, to allow me to focus on my fight against cancer and more importantly to provide financial security for Seamus. 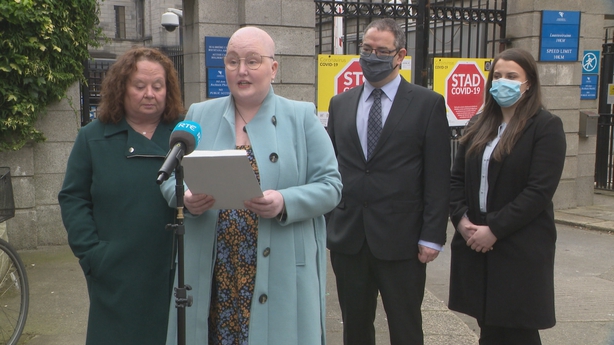 "Seamus is a rock to me, mature and intelligent. But he may also lose my guidance and my care as he makes his way through school and college to become the man I know he will be.

"So I am calling on the Government to act now to alleviate the worst impacts of the Supreme Court judgment in Ruth Morrissey's case for children like Seamus.

"The apology from the HSE gives me and my family some closure and peace of mind, I believe that the apology will help me move forward and focus on being a mother to Seamus.

"I want to thank my legal team for their hard work and guidance. No one has to go through cancer alone and I am so grateful to my family, friends and community for their support, care, love and compassion."

Counsel for Ms Rushe, Oonagh McCrann, said they wanted to emphasise in court that lawyers for the HSE had dealt with this case in a very efficient and compassionate way and that for that they were extremely grateful.

Mr Justice Kevin Cross said while defendants in such cases are frequently criticised for dragging things out, it was his experience that there had been excellent cooperation in most cases.