An eight-year-old boy who suffered severe brain damage after the hospital he was born in failed to diagnosis meningitis after his birth has settled his legal action for €22.5m.

His mother called on the Government to reform the health service and provide support for children with additional needs.

Following his birth, he was very unwell, with signs of infection. He was showing excessive sleepiness, crying and moaning.

However, his parents say assessments when he was one and two days old were inadequate and there was a delay in diagnosing him and giving him antibiotics.

He has cerebral palsy and has multiple mobility and neurological difficulties. He will require extensive care for the rest of his life.

The hospital initially denied liability, but on Tuesday issued an apology to Calum and his family.

In the apology, the hospital apologised unreservedly for the delay in diagnosing the infection and the injuries he suffered.

It said it had learned important lessons from the experience and continued to educate staff about the importance of "optimal communication and escalation" across all of its multidisciplinary teams.

The hospital expressed its sincere regret to the family and wished them and their two boys the best for the future.

Speaking to Mr Justice Kevin Cross, Calum's mother, Linda Spillane, said it seemed unreal that they were sitting in the High Court and the judge was saying her son's name. She said it had taken a long time to come to terms with what had happened to him.

Ms Spillane said Calum's little brother was four years old and she said it was already clear that he had surpassed Calum.

She said she wondered how Calum felt seeing his little brother walk across the fields, but she said Calum could not tell them.

Ms Spillane also told the court Calum had received no therapy for the past five months because of Covid-19 and had regressed.

Despite this, she said he was a sociable, chirpy child who was always willing to give it his best with his therapists. 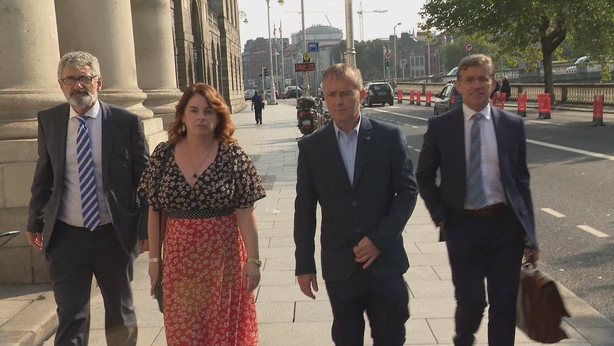 She said she would like a team to be surrounding him who would work together and communicate to give him what he needed.

Ms Spillane said she was happy to know that if she and her husband were not here tomorrow, he would now be cared for in his own home with his family around him.

He would be cared for until the end of his days, whether we are here or not, she said, and that was the most important thing.

Mr Justice Cross said it was a good settlement that would not be a bonus to anyone, but would try to give Calum what he needed to life as normal a life as possible.

Such care, he said, was very expensive. He wished the family the best in the future.

Outside court, Ms Spillane thanked her solicitors, Declan Molan and John Brooks and the legal team.

She said she was grateful they now had all the means to provide Calum with all the therapy that he requires.

Ms Spillane also said children with additional needs and their carers deserved respect and care in their communities.

However, she said families in their situation not only had to live with the daily challenges of caring for a child like Calum, but also had to constantly seek and, sometimes beg, for supportive structures to help their children.

She called on the Government to reform the health service and deliver a system that delivers a positive future for all citizens.

10 in court over social media details in Kriégel case