Stephanie O'Connor has been found guilty of impeding the apprehension or prosecution of Kieran Greene who yesterday was found guilty of killing Ms O'Connor's grandmother Patricia.

The body of Patricia O'Connor, who was 61, was found in 15 different parts in nine locations in the Dublin mountains in June 2017. 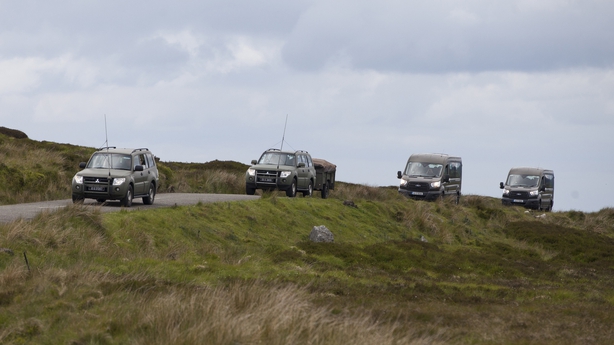 The prosecution case against Stephanie O'Connor was that she had disguised herself as her grandmother as a ruse, knowing or believing that 61-year-old Patricia O'Connor had been bludgeoned to death.

This afternoon, shortly after 4pm, the jury returned from its deliberations and the forewoman answered yes when asked by the court registrar if the jury had reached  a verdict in relation to any of the other accused.

The court registrar then read out the verdict that Stephanie O'Connor was guilty of impeding the apprehension or prosecution of Kieran Greene, knowing or believing him to have murdered Patricia O'Connor on 29 May 2017.

At that point Mr. Justice Paul McDermott told the jury they could continue deliberating this afternoon on the other two accused or resume their deliberations in the morning.

The jury opted to suspend deliberation until tomorrow morning.

Stephanie O'Connor had pleaded not guilty to disguising herself as Mrs O'Connor at Mountainview Park, Rathfarnham, Dublin 14 at a point in time after her murder on 29 May 2017 in order to conceal the fact that she was already dead.

The seven-week trial heard that the body of Mrs O'Connor, of Mountainview Park, Rathfarnham, Dublin 14 was dismembered into 15 separate parts that were found at nine different locations over a 30km range in the Dublin and Wicklow mountains between 10 and 14 June 2017.

Former Depute State Pathologist, Dr Michael Curtis, gave evidence that Mrs O'Connor's head was struck a minimum of three blows with a solid implement and the cause of death was blunt force trauma to the head.

The jury will continue its deliberations tomorrow in relation to the two other accused, Louise O'Connor and Keith Johnston.

Mother-of-five Louise O'Connor has pleaded not guilty to agreeing to or acquiescing in her daughter Stephanie O'Connor disguising herself as Mrs O'Connor at Mountainview Park, Rathfarnham, Dublin 14 on 29 May 2017 in order to conceal the fact that Patricia O'Connor was dead.

Keith Johnston has pleaded not guilty to assisting Mr Greene in the purchase of various implements at Woodie's, Mr Price, B&Q and Shoe Zone, Tallaght, Dublin 24 on 9 June 2017, which were to be deployed in the concealment of the remains of Mrs O'Connor.