This evening, gardaí were called to a plant in Ballyjamesduff in Co Cavan after a protester drove his tractor towards a wall.

The incident happened as workmen attempted to erect copies of a high court injunction against a picket there.

Gardai have arrived at Liffey Meats in Ballyjamesduff, the tractor with a front loader which drove at the wall, remains at scene pic.twitter.com/vIjfSb2dCw

The man ripped capping off the wall outside the factory using the tractor.

The workmen then left the scene while the farmer remained outside the gates of the factory.

Gardaí were called to the premises after a protester climbed into the cab of a cattle lorry that was arriving at the plant.

The company reported the matter to gardaí.

The Dawn Meats order extends to all unnamed people engaging in blockades and intimidation of Dawn Meats staff.

It is understood the permanent injunction was agreed to by protesters so that committal orders would not be brought against several protesters named in a previous temporary injunction.

In a statement, Dawn Meats said it is always its preference to avoid recourse to legal action, "but the illegal nature of the protest activity over recent days  days made it necessary to protect their business, employees, supplier farmers and customers".

Pointing to a possible intervention by the State if breaches of the permanent injunction occur, Dawn Meats said: "Today's ruling is permanent, and a welcome confirmation that when peaceful protest escalates to illegal activity, the courts will ensure the law of the land prevails, and seek to put a stop to intimidation, verbal abuse and threatening behaviour".

The Minister for Agriculture has said the move could create a, "cooling off period", which he said could help with discussions on the future of the industry.

Speaking on RTÉ's Drivetime, Minister Creed said that if blockades and protests were lifted, it would be an opportunity for the meat industry to "offer an olive branch" and get back into talks.

Meat Industry Ireland has said 12 meat plants have ceased operations as a result of the ongoing protests.

It said its members have had to lay off staff and have suffered significant losses as a result of the pickets outside meat factories.

Meanwhile, five farmers who were called to attend the High Court on foot of an injunction granted to Slaney Foods in Co Wexford earlier this week have agreed to abide by the terms of the court order.

The farmers will be allowed to continue to peacefully picket plants, but they cannot interfere with activities there, or trespass on any premises.

Mr Justice Charles Meenan said he was pleased the defendants in the case had instructed a solicitor who followed the "appropriate course in the matter".

The judge also pointed out that the farmers' dispute had not in itself been before the courts, just the court orders.

Injunctions issued earlier this week in relation to the Slaney Foods and ABP plants have now been made permanent.

A farmer who had been under the threat of being imprisoned if he blocked a beef-processing plant in Co Waterford has agreed to the terms of a High Court injunction issued earlier this week.

Dawn Meats had obtained permission to bring proceedings seeking the possible imprisonment of a protester it claimed had breached the injunction.

Seamus Delahunty, 54, with an address at Portnahully, Carrigeen, Co Kilkenny, has now agreed not to block activities at any meat-processing plant, or to abuse or intimidate staff.

He and other demonstrators can, however, continue to protest peacefully at picket lines.

He was accompanied to the High Court by his wife, Pauline, and two children.

Justice Meenan, said a "considerable amount of common sense" had been shown in court today.

Seeking the original injunction, Dawn Meats had accused Mr Delahunty of launching "a volley of verbal abuse" at staff based at its plant at Grannagh, Co Waterford.

The processors claim a multi-million euro meat deal with China is under threat because of the protests. 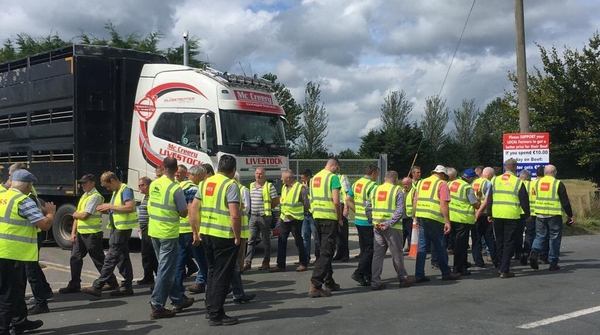