Waiting times for an appeal to be heard in the country’s highest court have fallen from five years to just one year, according to a report published today.

Members of the Supreme Court are hearing a case in Galway at NUIG, marking the first time for the court to sit in Connacht, and the first time it will sit outside a courthouse since 1932.

This is the third time for the court to sit outside Dublin, following successful sessions in Cork and Limerick, as part of an effort to increase transparency about its work, and understanding of its role.

Before the court began hearing an appeal this morning, it published its first ever annual report, outlining the work of the court.

There was a 10% increase in applications for leave to appeal filed in the Supreme Court office in 2018 compared to 2017.

The court delivered 91 judgments last year, determined 157 applications for leave to appeal and disposed of 128 appeals.

It now takes around a year for an appeal to be heard in the Supreme Court and two for a hearing in the Court of Appeal, down from a previous waiting time of five years. 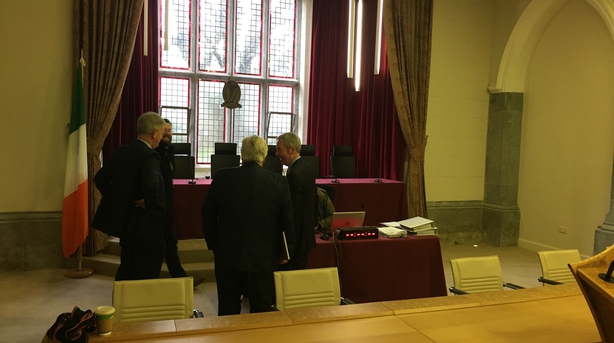 In his foreword to the report, the Chief Justice, Mr Justice Frank Clarke, said it was hoped the work of the court inside and outside the courtroom and in Ireland and abroad could be highlighted.

He said he hoped the public would gain a greater understanding of what the court does and its role in upholding the Constitution and the law.

The televising of some judgments of the court over the past year is also part of the efforts to bring greater access to its work.

The Chief Justice said Brexit would present unique challenges and opportunities in 2019. He pointed to the court's membership of ten European and International networks and says he is confident those challenges can be met head on.

Mr Justice Clarke said that since the Court of Appeal was established in 2014, all cases heard by the Supreme Court have been determined to be of general public importance.

He said it was important for the Court to mark that fact by sitting outside Dublin to show it served all of Ireland and he said it would be the Court's intention to continue with visits outside Dublin once a year.

The court will deal with a number of important cases while in Galway.

Tomorrow it will give judgment in businessman Denis O'Brien's appeal against the dismissal of his action over statements made in the Dáil in 2015 about his banking affairs.

His appeal centres on how the Dáil's Committee on Procedure and Privilege dealt with the statements and his complaints.

On Wednesday, the court will hear an appeal over whether An Bord Pleanála breached its legal obligations in the way it approved the first phase of Apple's planned €850 million data centre in Athenry.

Apple has now scrapped its plans for the project. However, the court's decision could have implications for similar developments in the future.

As well as dealing with appeals, the court will also have a number of seminars with members of the legal professions and students of the school of law in NUIG.

The Head of the School, Charles O'Mahony said the Supreme Court was helping to demystify its role as well as promote the rule of law and the concept of open justice