The State has dropped the charges against a 26-year-old man accused of the murder of David Byrne at the Regency Hotel in Dublin three years ago.

The Special Criminal Court was told that due to the death of the lead investigating officer, it was no longer in a position to proceed with the case.

Patrick Hutch, from Champions Avenue in Dublin, went on trial at the non-jury Special Criminal Court last year in connection with the shooting during a boxing weigh-in at the hotel on 5 February 2016.

Prosecuting counsel Sean Gillane told the court that after a number of adjournments there had been an accomplished analysis of the remaining evidence.

He said the State had an obligation to ensure that the trial could proceed fairly.

"Sadly, the passing of the late Supt Fox has resulted in a situation where the prosecution is not in a position to lead evidence on a number of issues," Mr Gillane said.

Mr Hutch's defence barrister Michael O'Higgins told the court his client had pleaded not guilty and the case had been very keenly contested and would have continued to be if the trial had proceeded.

Presiding judge Mr Justice Tony Hunt said because of the application by the State to enter a nolle prosequi, meaning the case would not be proceeding, there was no need for further comment and he discharged Mr Hutch from the indictment.

Members of Mr Byrne's family shouted "it’s a disgrace" and asked to address the court, but were not allowed.

There were emotional scenes inside and outside the courtroom as Mr Byrne's family expressed their anger that the case was not proceeding.

"Where is the justice?" they asked. Earlier, they held placards outside the Criminal Courts of Justice.

The trial had been adjourned a number of times to allow time for an investigation into the death of the senior investigating officer.

Foul play was not suspected and his death was treated as a personal tragedy. 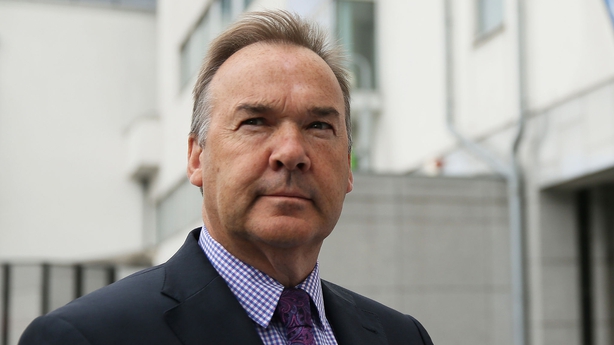 The trial opened in January 2018 and heard four days of evidence before going into legal argument.

At the opening of the trial in January 2018, the prosecution alleged that Mr Hutch was the man dressed as a woman carrying a gun on the day Mr Byrne was shot dead.

He denied charges of murder and related firearms offences.

The trial had been stalled over the disclosure by the prosecution of emails between four gardaí.

Notes written by the late superintendent were handed into the court and read by the three judges.

The trial was further adjourned to allow time for a progress report to be outlined to the court.

This report concerned the analysis of electronic data - a mobile phone, two USB devices and a laptop computer - as part of an inquiry into the death of Det Supt Fox.

As well as pleading not guilty to the murder of Mr Byrne, Mr Hutch also denied possessing three AK47 assault rifles in connection with the shooting.

The court has previously heard that the shooting took place during a boxing weigh-in at the Regency Hotel, when a man dressed as a woman and another wearing a flat cap, armed with handguns, raided the venue, followed by three people dressed in tactical-style garda uniforms and carrying assault rifles.

It was the prosecution's case that Mr Hutch was the man dressed as a woman and that, although he did not shoot Mr Byrne, he was part of a "shared intention" to commit the offence.