A young girl who sustained a severe brain injury after she fell off the side of a Luas tram in Dublin while "tram surfing" eight years ago has settled her High Court action for more than €500,000.

Rebecca Kelly was 13 when she and a friend jumped onto the outside of a Luas tram, gripping on to the edge of the doors as it departed the Fatima station on the Red Line.

She fell back on to the tracks striking her head and had to be rescued by her friend.

The friend, along with the help of others, pulled Rebecca out of the way of an oncoming Luas tram en route to the city centre.

The girl's barrister Bruce Antoniotti SC told the High Court the young woman, who became a mother just two weeks ago, accepted the accident was her fault and she acknowledged she should not have been tram surfing and she knew at the time it was a dangerous activity.

Counsel said Rebecca did not want to blame the driver.

She claimed there was an alleged failure to have any adequate visual systems employed and activated on the tram and that the driver was unable in the circumstances to see the non-platform side of the tram before leaving the station.

It was claimed the tram pulled off from the station without first observing the non-platform side of the tram.

All the claims were denied and Veolia contended there was contributory negligence on the part of the young girl as she had she had allegedly exposed herself to the risk of injury by tram surfing with a total disregard for her own safety. 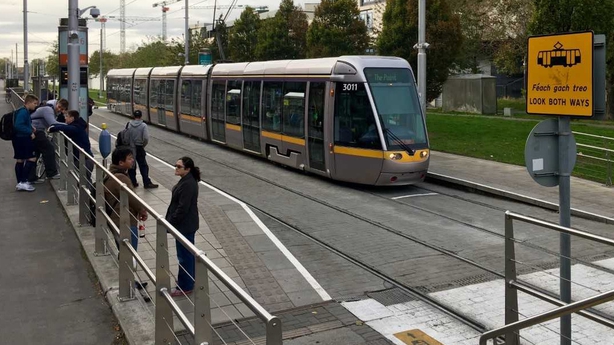 Mr Antoniotti SC told the court it was a tragic case.

He said Rebecca was with a group of friends at the Fatima Luas stop on the Red Line on the inbound platform at 9.15pm. He said at that time young people engaged in "tram surfing".

Mr Justice Kevin Cross commented it was what boys used to do in the past by hanging on to the back of trucks.

Counsel said "tram surfing" was where young people jumped on to the side door where there was a small ledge and they put their fingers between the door and the body of the tram and "held on for dear life".

He said there were 54 incidents of "tram surfing" recorded on the Luas trams between 2005 and 2010, but the placing of metal strips to prevent gripping between the door and the body of the train had helped deter the practice.

He said Ms Kelly jumped on to the side of the Tallaght-bound tram but fell off very quickly and hit her head. Counsel said she had never "tram surfed" before.

Counsel said there had been a problem in the UK and Ireland with young people "tram surfing" and initially a grease was applied to the bodywork and cameras have been installed as well.

He said in this case, the tram pulled in to the Tallaght-bound platform and the driver had to watch the platform where passengers were getting on and off.

To view the other side of the tram where Rebecca jumped on would have required him to switch cameras.

Counsel said the driver also had to be looking straight ahead when the tram moved off as people often try to cross in front.

He said that after this accident a metal strip was put in the space between the doors and the body of the trams.

Approving the settlement, Mr Justice Cross said it was not necessary for the court to tell Ms Kelly she did a silly thing as she knew that. However, he commended her for her honesty.