Seasoned observers at the Belfast rape trial said they had never before seen a crowd so large outside Laganside Courts. The timing of the verdicts, as the city’s workers were taking a lunch break on Wednesday, may have had something to do with that.

The press and public gallery had indeed been packed to capacity for the end of the trial but outside, the crowd grew and grew. Many just happened to be passing by, saw the cameras and decided to stay for the spectacle.

As Paddy Jackson and his solicitor emerged, a major media scrum ensued. Used to jostling with each other in these situations, news crews found themselves fighting for elbow room not just with their colleagues but with members of the public too. 'Citizen journalists' were recording events for themselves. Spectators with camera phones outnumbered the press.

Just as it had started nine weeks earlier, the trial had come to an end in the same blaze of publicity.

The public profile of two of the four defendants and the subject matter of the case led to unprecedented media attention. The Public Prosecution Service said it hoped this media attention helped the public to better understand the criminal justice system and the trial process.

Whether or not it has fostered a better understanding is difficult to say. What it has done is raise many questions and prompted calls for change.

The stark difference between reporting rape trials either side of the border was immediately evident, as the identities of the defendants were made public from the beginning. In the Republic, this would not have been possible unless they were convicted, and even then only if doing so would not identify a complainant.

Tánaiste Simon Coveney insisted in the Dáil that the case could not and would not have developed in the same way if it had taken place south of the border.

But it’s probably not entirely true to say the case would not have attracted as much media attention if the identities of the defendants had been kept anonymous. In the knowledge that, if convicted, the names of those on trial could be released, the press benches in the court would almost certainly have been full every day.

The public may not have known why it was receiving such coverage, but if two international rugby players had been walking in and out of the Criminal Courts of Justice every day for nine weeks, social media would almost certainly have had a hand in letting at least some people know why. 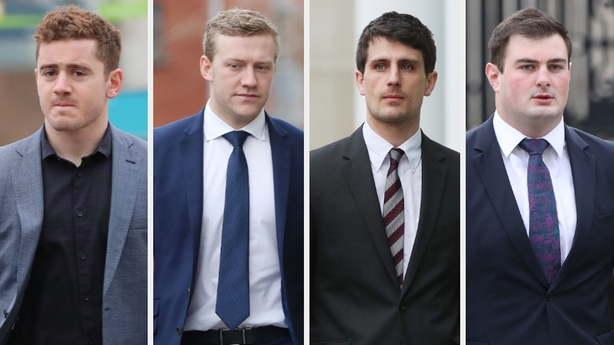 Despite the rules of reporting in such trials here, to date there has been little evidence that complete control can be exercised over what is said and who is identified on social media. Rules may be in place but policing them is an entirely different matter and one that requires urgent attention from the authorities in both jurisdictions.

This was particularly evident when the complainant in the Belfast case, who is entitled to anonymity no matter what the verdict, was named on social media.

Her time in the witness box was displayed on a screen in the courtroom which was open to the public. It is difficult to see how her identity could have been kept secret in such circumstances. In Irish courts such cases are held "in camera", private hearings on which the press must strictly adhere to reporting restrictions.

After the verdicts on Wednesday, the PSNI said such breaches of her right to anonymity "are and will be investigated". Yesterday, it emerged that at least two people have been questioned by police. In the recent past in Britain members of the public have been fined for revealing on social media the name of complainant in a rape case.

Mr Jackson’s solicitor, Joe McVeigh, did not mince his words when he spoke passionately outside court about the "vile commentary" on Twitter which had threatened the integrity of the trial process. He said several days of the trial had been lost due to problems thrown up by the intrusive infection of the process by social media.

He was of course speaking as a defence lawyer, on behalf of his client but later on RTÉ’s Six One news he also criticised what he said were the "non-existent" protections for the complainant.

He said her name was now "common knowledge" and if he was her or her parents he would be appalled.

"They were given assurances before this trial commenced that that young woman’s identity would be kept secret. It is impossible to do that when you have an open court filled to the brim for nine weeks where her name is openly used throughout the trial."

Mr McVeigh said these were the type of issues to be raised at protest rallies around the country on Thursday and at one planned for Dublin today and he "would entirely agree with them".

"The safeguards that this young woman thought were in place to protect her identity were non-existent and our system here in the North pays lip service to those types of protection. The system in the South is the way it should go at the very least."

However the system here is not without its problems. Social media commentary surrounding trials has been a thorn in the side of the judicial system for many years now.

Mr McVeigh said there was no reason to believe this problem would not worsen. Just two days after the verdicts in Belfast, it emerged that Mr Jackson plans to sue Labour Senator Aodhán Ó Riordáin in relation to a tweet he wrote after the verdict and later deleted.

That in itself led to a backlash on Twitter as social media users employed the hashtag SueMePaddy and had it trending later that day. Many pointed to the so-called Streisand effect - when legal action aimed at trying to prevent media attention achieves the reverse.

Mr McVeigh said he was inviting the Office of the Lord Chief Justice, the Attorney General and the Public Prosecution Service to enter into discussions to look at more robust mechanisms that can strike an effective balance between everyone's rights but that properly secure integrity of the criminal justice system.

More robust mechanisms are certainly required. Warnings given by the trial judge to the public gallery about social media postings appear to have fallen on deaf ears.

Indeed her warnings to the members of the jury seemed equally ineffective in at least one case. A day after the verdicts, a juror was found to have posted comments online about the trial. It will be interesting to see what, if any, sanction the juror will face.

The issue of social media commentary about cases is one that will now surely have to be examined in both jurisdictions. After a high-profile trial in Dublin last year, a circuit court judge said the current laws on contempt of court were "hopelessly inadequate" to curb commentary on social media.

The former chief justice, Susan Denham, had also commented about the need for reform in the area of social media and the courts.

And as Mr McVeigh concluded on Wednesday: "We need to have a look at a manner of trying cases that is fit for the 21st century."

Govt urged to speed up law on international surrogacy

Man sentenced to life in jail for Cameron Reilly murder