Former Ulster Volunteer Force commander Gary Haggarty has been sentenced to life imprisonment for aiding and abetting in murder.

Catholic volunteer worker Peter McTasney was shot dead by the UVF at his home in the outskirts of North Belfast in February 1991.

Judge Adrian Colton QC told the defendant: "I impose the only sentence open to the court - that is the one of a life sentence."

The actual time he will spend behind bars has yet to be fixed.

Earlier, the confessions of the loyalist "supergrass" were outlined in graphic detail during the sentence hearing in Belfast.

Haggarty's admission to shooting defenceless grandfather Sean McParland in the neck at close range was read to Belfast Crown Court, as was his description of the kidnap and brutal beating of father-of-four John Harbinson by his UVF gang.

Haggarty, 45, a long-time police informer, has pleaded guilty to 202 terror offences, including five murders, as his part of a controversial state deal that offered a significantly reduced prison term in return for giving evidence against other terrorist suspects.

The opening day of the sentence hearing was told Haggarty and another UVF member were due to toss a coin to determine who would be the man to pull the trigger ahead of Mr McParland's murder, before the loyalist chief dismissed the idea and demanded that he would be the killer.

Lawyer for the state Ciaran Murphy told Mr Justice Colton that Haggarty said he was handed a promotion within the UVF for shooting Mr McParland after forcing entry to a house on Skegoneill Avenue in Belfast as the 55-year-old, who spoke with the aid of a voice box, was babysitting his young grandchildren.

Mr McParland was not the intended target of the UVF attack in 1994.

Mr Murphy told the court that Haggarty, once leader of the UVF's notorious Mount Vernon gang in north Belfast, expressed regret in his admission to detectives.

"He said he is sorry, it was the wrong person killed - he is sorry for the kids that were there," the barrister said.

The sentence hearing was also told that Haggarty has acknowledged that two more of his victims - Eamon Fox, 44, and 24-year-old Gary Convie - were innocent men, not republican paramilitaries as loyalists claimed at the time of their shooting in 1994.

The Catholic workmen were shot as they ate lunch in their car at a building site on North Queen Street in Belfast.

Haggarty claims he was not the gunman on that occasion, but that he escorted the killer to the location, shaking hands with him just prior to him opening fire on the men through a fence.

Mr Murphy told the court: "He said he did not believe the victims were republicans, just soft, easy targets."

Haggarty, dressed in a grey suit, sat impassively in the dock as his litany of crimes were detailed.

Mr Fox's son, Ciaran, was one of a number of victims' relatives in court as the details of Haggarty's reign of terror were recounted.

Outside court, Ciaran Fox said: "I knew the truth all along that my father was an innocent man but to hear that Haggarty has admitted before they actually carried out the shooting that my dad and Gary were both innocent, that they were not republicans as they claimed at the time - it was nice to hear that part." 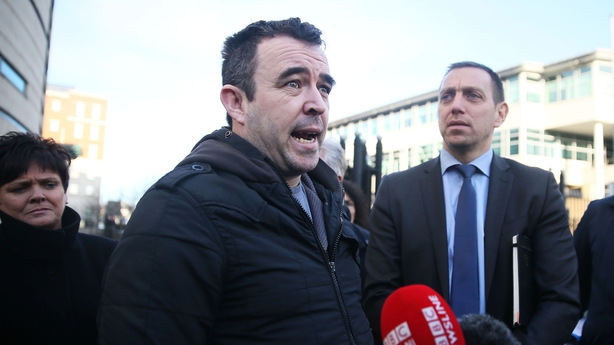 Haggarty also admitted being in the gang that abducted unemployed taxi driver Mr Harbinson in Belfast in 1997 prior to the brutal beating that ended his life.

The loyalist commander claimed he later went to retrieve a gun to deliver a "punishment" shooting on the 39-year-old, but that colleagues had already administered the fatal beating in an alleyway while he was gone.

Due to the need to outline details of all 200-plus offences on Haggarty's charge sheet, the sentence hearing is expected to take at least two days.

Mr Justice Colton will then deliberate before determining the extent of sentence reduction the loyalist will be handed.

He has already spent a number of years in custody on remand, so could potentially serve no further time in prison.

Prosecutors have already announced that he is to be used as a witness in the prosecution of an individual for the murders of Mr Fox and Mr Convie.

However, the vast majority of individuals named by Haggarty in his police interviews will not face prosecution, amid state concerns about a lack of supporting evidence.

Prosecutors have said Haggarty's evidence is insufficient to provide a reasonable prospect of obtaining a conviction against 11 suspected UVF members and two former police intelligence officers, allegedly his then handlers.

As well as the five murders, Haggarty, who is in protective custody, has also admitted five attempted murders, including against police officers, 23 counts of conspiracy to murder, directing terrorism and membership of a proscribed organisation.

He was interviewed more than 1,000 times by detectives in one of the biggest and most complex cases undertaken in Northern Ireland.