Aer Lingus has been fined €250,000 for a breach of health and safety law in connection with the death of a driver at Dublin Airport over two years ago.

John Murray, 55, from Skerries, Co Dublin, fell from a loading bay platform at a cargo warehouse at Dublin Airport and suffered fatal head injuries on 5 November 2014.

The court was told a study carried out seven years previously had identified the risk of fall for those using the platform.

A representative for the company pleaded guilty on its behalf to failing to ensure adequate measures were in place to protect people from the risk of a fall from a height and a failure to implement its written procedures dealing with driver access to loading bays.

The offence states that Aer Lingus "regularly permitted or required drivers to access and egress the building via the loading bay itself".

The court was told that Mr Murray, who was employed by a courier company, was collecting parcels when he fell from a 3ft high loading platform and suffered head injuries.

He was found unconscious 25 minutes later. He was treated in hospital for multiple skull fractures but died a number of days later.

The court was told that health and safety inspectors interviewed a number of employees and discovered that drivers habitually gained access to the warehouse by climbing on to the loading dock.

A risk assessment carried out seven years previously had identified a potential fall risk by allowing uncontrolled access for external drivers climbing onto the dock.

Lawyers for Aer Lingus apologised to the Murray family.

Senior counsel Shane Murphy said the company "deeply regrets the fact that these events occurred and the distress and hurt experienced by the Murray family."

He said it was a tragic case where a risk had been identified in 2007 and guidelines were given to employees. He said there had been a failure to supervise at night and a bad practice developed.

He said it appeared to be the only accident of its kind and told the court there was now a fence around the area and clear signage on the door and strict procedures for access by external drivers which is supervised by Aer Lingus staff.

He added that regular spot checks are now carried out.

Health and safety inspectors agreed that there had been no reoccurrence of this type of activity and had been none previous to this.

Judge Martin Nolan said the purpose of health and safety was to protect people from themselves. He said if people were allowed to take short cuts, they would.

He said no one could have envisaged that someone could be killed from a fall from the platform but there was an obvious danger. He took into account the company's sincere apology and the guilty plea.

He said, nonetheless, Aer Lingus was a flagship company and people expected a lot from it.

"People expect it to run a good operation and on this occasion it did not, and this practice was allowed to occur which was reprehensible."

He said, however, it was not an extreme case and imposed a fine of €250,000. The court was told maximum fine for the offence is €3m.

In a victim impact statement, Mr Murray's wife Angela said today would have been her husband's birthday. 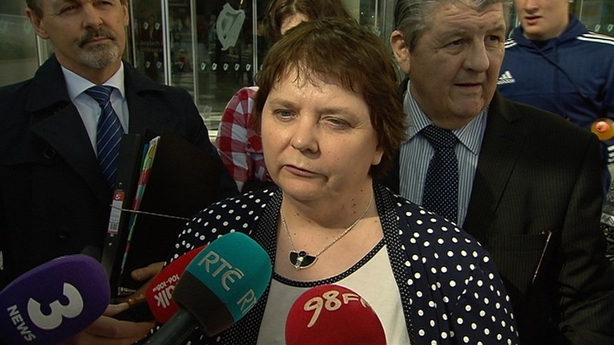 She said she will never forget the knock on her door at midnight the night her husband was injured.

She described the trauma of seeing him in the hospital and how she and her children "swung from hope to despair" in the following days as doctors tried to save him.

"My family brought the children in and I will never forget having to tell them their beloved Dad was gone", she said.

She also described how John Murray appeared to rally once more only for them to be told again he was going to die.

She said it was the third death in the family in 18 months and she still found it hard to accept her husband's death.

She described his "huge funeral" but added "it's all gone now. No one talks about him, it's like he didn't exist.

"We lost the Harps (local GAA club) and all that support because it was too difficult for the kids to continue something that John had been such an integral part of."

'No other family should have to endure our pain' - Angela Murray, whose husband John died after falling from a loading bay platform pic.twitter.com/o18FuIdiFD

Mrs Murray said she had been diagnosed with Post Traumatic Stress Disorder.

"There is a John shaped hole in my soul. I don't even know who I am now. I don't have anyone to back me up, bounce things off, calm me down or tell me everything will be OK. I am missing my other half."

She added: "For us when the case is over John is still dead, when the fuss and the hype dies down, John will still be dead.

Our lives are profoundly changed. John was a good man, a loving husband and a devoted father, a loving brother and a friend to many. The world is a poorer place without him.

In his victim impact statement, Mr Murray's son Cillian said his father was "my support, my rock, my safety net.

"Along with everything else I have stopped playing my passion in sport, hurling, because my dad was far too closely involved with my team and I find it impossible to even take part in training because he was part of the management staff of my team. He watched me grow and helped me along the way."

He said he found it difficult to describe the "inexplicable pain and loss" in words.

His 15-year-old daughter Alanna said she was going through something "no teenager should have to go through".

She said her father was "the best person I have ever met, he always told me I could do anything if I put my mind to it and it really does work."

I love him so much and I miss him a lot ... when I think of my Dad I think of him not being here instead of the good times we had together.

"I don't remember what his voice sounds like and that is really hard for me to deal with."

In a statement on behalf of the Murray family, solicitor Dermot McNamara confirmed that a claim for damages against Aer Lingus had been lodged in the High Court.

He said: "Whilst my clients welcome today's verdict, it does little to ease their pain."

"John Murray went to work on November 5 2014 and his family expected him to return home safely.

"He died because Aer Lingus did not open and close the designated pedestrian door and instead drivers had to access the warehouse via the loading bay.

There is no point in Aer Lingus having vital health and safety rules if they fail to ensure they are strictly followed.

"In this case, the failure to ensure drivers used a safe pedestrian option, ultimately cost Mr Murray his life and left a family with a devastating loss."