German health authorities have advised against the use of the Moderna coronavirus vaccine for people under 30 due to evidence of a small risk of cardiac inflammation.

"For people above the age of 30 there is no higher risk," it added.

As a result, the Stiko updated its coronavirus vaccine guidance and "recommends that people under 30 only be vaccinated with Comirnaty," the BioNTech-Pfizer jab, one day after France issued similar guidance.

The advisory covers both initial inoculations and booster jabs even if the first vaccine was Moderna, it added.

The Stiko bases its recommendations on the findings of Germany's Federal Institute for Vaccines and Biomedicines, which compiles data on side effects and complications.

The US has also delayed approval of the Moderna jab for young people, though last week they recommended use of the Pfizer vaccine for children ages five to 11 after reviewing the risks of myocarditis.

Paediatric cardiologist Matthew Oster, commenting on the Pfizer recommendation at the time, said he was "much more worried" about the risks of Covid to young people than risks posed by the vaccine.

Demand for Covid booster jabs jumped in France after President Emmanuel Macron said a top-up dose would be necessary for people to retain their vaccine passes, the country's main appointment booking site has said.

"The Macron effect" prompted 149,000 requests for shots, most during and immediately after the president's televised address yesterday evening, in which he warned that coronavirus cases were again on the rise, Doctolib said.

Anticipation of the tougher rules had already sparked 96,000 bookings on Monday, compared with an average of 50,000 a day in recent weeks.

Mr Macron announced that from 15 December people over 65 would require a booster shot if they want to continue using their vaccine passes to gain entry to bars, restaurants, cinemas and other public venues. 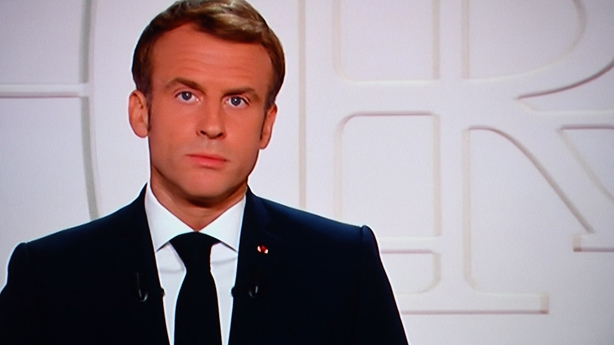 He added that from age 50 up, people would be allowed to request an additional vaccine dose, without it being mandatory for the Covid passes of 50 to 64-year-olds.

France has one of the strictest vaccination regimes in Europe, with the passes required to take intercity trains, visit museums and go to gyms, among other amenities.

That has pushed France's overall vaccination rate to 75%, a level relatively unchanged in recent weeks.

In his speech Mr Macron urged the roughly six million people in France yet to get even a first jab to do so: "This is an appeal for responsibility -- get vaccinated," he said.

US pharmaceutical giant Merck has vowed to avoid the pitfalls of the global Covid vaccine rollout by ensuring its new anti-coronavirus pill is made available in wealthy and poor countries at almost the same time.

Paul Schaper, the company's executive director of global public policy, told AFP that Merck began working on its access strategy from July 2020, long before the efficacy results of the drug it developed with Ridgeback Biotherapeutics were announced in October 2021.

The United Kingdom last week became the first country to authorize molnupiravir. In a clinical trial, the antiviral was shown to cut Covid hospitalisations by 50% in among newly infected people, and also prevented 100% of deaths.

"We started developing our supply chain very early on," he said, with the company projecting it will have 10 million courses ready by the end of this year and at least double that figure in 2022.

These, he said, would be priced according to a tiered framework that is based on a country's ability to pay, as defined by World Bank data.

Beyond its own supply, Merck, known as MSD outside the US and Canada, struck deals with eight licensed generic partners in India, and has signed a voluntary licensing agreement with the UN-backed Medicines Patent Pool to facilitate access in 105 countries.

On top of that, The Bill and Melinda Gates Foundation last month announced an investment of up to $120 million in an effort to speed access to lower-income countries through a "volume agreement" that ensures supply of drug ingredients.

"In first quarter, in second quarter of 2022, we will have a significant amount of product from Merck available in low and middle income countries," Mr Schaper added, without speculating on a combined total between the various strands.

"We have a really good chance of having really much more equitable access to this medicine than we've seen to date in the COVID response," he said, adding it was possible to reach low-, middle- and high-income countries "at roughly the same time."

Greece is experiencing a fourth wave of Covid, Prime Minister Kyriakos Mitsotakis has warned as daily infections hit their highest since the pandemic began, with hospitals starting to buckle under the pressure of rising infections.

The country notched up a record 8,613 new Covid-19 cases in 24 hours, the National Organisation of Public Health said, after cases more than doubled in less than a fortnight.

Forty-six people died of the disease yesterday, after 65 a day earlier.

"We are facing a fourth wave," which "mainly concerns the unvaccinated," Mr Mitsotakis said after talks with his visiting Dutch counterpart Mark Rutte. 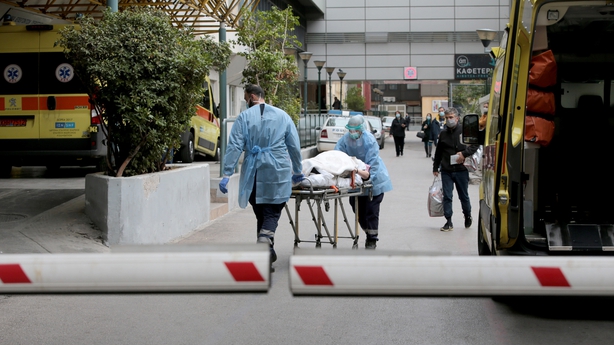 He said the government was "focused on increasing vaccination numbers" and "taking measures without resorting to a lockdown".

The north of the country, where inoculation rates are lower than in other regions, has been the worst hit in recent days.

In the second city of Thessaloniki, management at a key hospital fighting Covid said it was overwhelmed with patients.

Nikos Kapravelos, head of the emergency department at the Papanikolaou Hospital, at the weekend warned against a new spike similar to during the second wave in November last year.

Health authorities on Friday made Covid passes mandatory for open-air restaurants and cafes, as well as indoor public spaces.

However, in several regions, the measures are not being respected, especially in some Orthodox churches where images in the media have shown maskless worshippers kissing icons and not observing social distancing.

Father Timotheos, spokesman for the Holy Synod of the Church of Greece, on Monday claimed on Mega TV that "sacred icons do not transmit the virus or disease".

Senior health ministry official Marios Themistokleous on Monday warned cases were on the rise in Greece, even if 61.2 percent of the population had received two vaccination jabs.

He said appointments for a first dose of the Covid vaccine had increased sharply in recent days.

Shops and malls in New Zealand's biggest city Auckland opened their doors open for the first time in three months as the city, which is at the epicentre of the country's coronavirus outbreak, gradually reopened.

Retail stores filled up within hours of reopening due to pent up demand while some shoppers reportedly queued up outside malls overnight to take advantage of early bird offers at some stores.

Libraries, museums and zoos were also allowed to receive visitors as the government eased coronavirus restrictions amid a pick-up in vaccination rates and due to mounting pressure from critics calling for more freedom.

The hospitality sector, however, remained shut.

In her first visit to the city since it was locked down on 17 August, Prime Minister Jacinda Ardern said the hospitality sector will reopen as soon as Auckland hits its vaccination target. 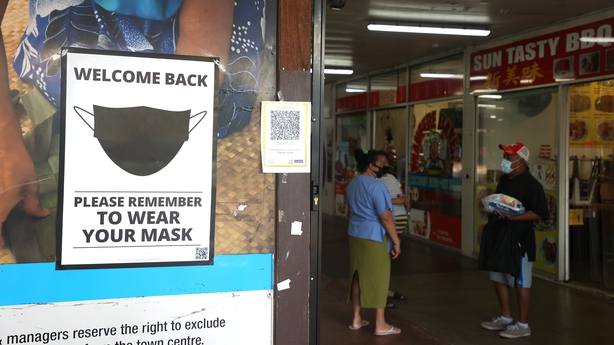 "We have maintained contact with hospitality representatives all the way through...we know how tough it's been," Ms Ardern said.

"But the light is at the end of the tunnel. We will see reopenings in the very near future as Auckland starts to hit those targets," she said.

While New Zealand has been criticised for a slow start to its vaccination campaign, nearly 80% of the eligible population has now received a second dose.

Auckland schools can return to face-to-face learning from 17 November, the government said.

Despite its success last year in eliminating Covid-19, New Zealand has struggled to fight off a highly infectious Delta variant this year, forcing Ms Ardern to move from a strategy of zero cases through lockdowns to living with the virus.

New Zealand still has among the lowest coronavirus cases in the world with under 8,000 infections reported so far and 32 deaths.

Apart from the 1.7 million Aucklanders, and residents in some neighbouring regions, life for the rest of the population has largely returned to normal domestically although the country's borders still remain tightly shut.

The outgoing government of Prime Minster Andrej Babis has rejected imposing a lockdown or similar restrictions despite the numbers growing steadily in recent weeks, saying vaccinations were the way to tame the fresh wave of the pandemic.

The Czech Republic had 6.14 million people fully vaccinated among the population of 10.7 million as of 9 November.

With 58.7% of the total population vaccinated, the country ranks below the European Union average of 64.6%, according to European Centre for Disease Prevention and Control.

The latest vaccination campaign is using graphic pictures of Covid-19 victims accompanied by slogans like: "He did not find the time to get vaccinated."

Hospitalisations grew to 3,295, including 462 people in intensive care, in the nation of 10.7 million.

South Korea encouraged its citizens to take Covid-19 booster shots, as more of the elderly fell ill and reported vaccine breakthrough infections, driving serious and critical cases to a record.

Severe coronavirus cases jumped from the mid-300s in October to 460 today, official data showed. Of the severely ill patients, more than 82% were aged 60 and older.

A senior health ministry official told a news conference that the increase is not posing a threat to the country's healthcare system yet, as there are nearly 500 ICU beds available.

He said the speed of the rise in severe cases and the size of total infections, especially among the unvaccinated, are the major points to consider in deciding its future response to the healthcare system.

But it has steadily risen in recent weeks, led by the elderly, as vaccine protection wanes over time and the group's weaker immune system makes them more vulnerable to infections.

Of the total serious and critical patients with vaccine breakthrough infections in the past eight weeks, 93% were from those aged 60 and above, according to the government data.

The country has inoculated 640,232 people with a booster shot, since the programme began last month, mainly using vaccines from Pfizer/BioNTech and Moderna.

South Korea started a gradual easing of Covid-19 restrictions this month, as it has fully vaccinated nearly 90% of its adult population, or 77% of its 52 million people.

The authorities have said a circuit breaker will be issued when there is a major strain on the number of hospital beds to treat serious cases, but have not revealed the exact threshold.

Four lions at a Singapore wildlife park have tested positive for the coronavirus after coming into contact with infected zookeepers, and have symptoms including coughing and sneezing, officials said.

The infected big cats along with five others at the Night Safari park have been placed in isolation in their den, the government's animal and veterinary service said.

"All the lions remain bright, alert and active," said Sonja Luz, from Mandai Wildlife Group, which operates the park.

"We expect that the lions will make a full recovery with minor supportive treatment."

Three zookeepers from the Night Safari are confirmed to have been infected. The park is an open-air zoo home to hundreds of animals, which welcomes visitors at night.