The Department of Health has been notified of 2,549 new cases of Covid-19.

There are 481 patients in hospital with the virus, down 6 on the same time yesterday.

Of these, 97 people are being treated in ICU, a decrease of two from yesterday.

Chief Medical Officer Tony Holohan said that today's figures represent a high number of cases across the entire population, with the highest incidence among five to 12-year-olds.

"While the Covid-19 vaccines give high protection against severe illness, hospitalisation and death, the way to break transmission is by following all aspects of the public health advice," he said. 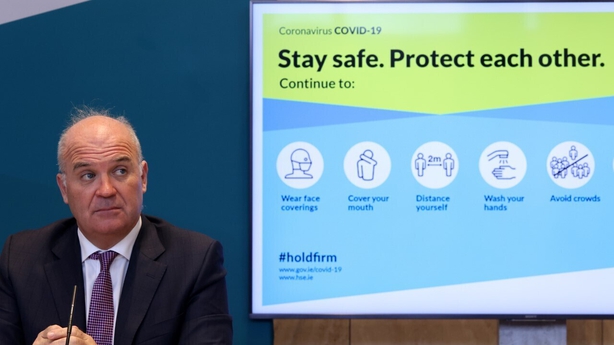 "If you are having visitors over, provide hand sanitiser, open windows and try to ensure people can spread out and keep their distance from one another – avoid crowded parties," Dr Holohan said.

"For trick-or-treaters, give out treats outdoors, if possible. Wash or sanitise hands frequently and before eating or handling treats.

"Neither children nor adults should go trick-or-treating or meet up with others if they have any symptoms of Covid-19, even if symptoms are minor – instead, please isolate and get a test."

Meanwhile, the Taoiseach has said that that there will be no return to widespread contact tracing for children, because Government does not want children out of school for ten days unnecessarily.

He said that it suggests that there could be scope for antigen testing to be piloted in selected situations.

However, Mr Martin said that the Chief Medical Officer has been at pains to point that the real issue for children is not Covid-19 exclusively, but other respiratory illnesses.

Regarding vaccines for children, the Taoiseach believes that the National Immunisation Advisory Committee (NIAC) may be able to give this consideration in a months' time, once the European Medicines Agency has completed its assessment.

Leo Varadkar said if there is a change to the current policy, it is more likely to be a move to testing rather than contact tracing.

However, he insisted schools would reopen next week after the midterm break and said it was safe to be in school.

Speaking to reporters in Monaghan, he said the current spike in cases among children aged five to 12 was not surprising given that they were not vaccinated.

But he added there were indications that will change and vaccines could be offered to children in that age group.

The Tánaiste was also asked whether there is a mixed message on schoolchildren given the Health Service Executive's view that antigen testing of close contacts is not warranted.

He said the difficulty with Covid-19 is that it is an evolving situation and decisions are made on what is best, but the science can change.

Meanwhile, a teachers' union has called for contact tracing to resume in primary school, saying principals should not be left to make serious public health decisions about Covid-19 infections.

Speaking on RTÉ's Morning Ireland, Mr McKeown said: "[The] facts are clear and it is really important that principals have access to rapid risk assessment, contact tracing and testing of pupils, the largest groups of unvaccinated people in the country."

The INTO has also called for a pilot antigen testing scheme to begin without delay in primary schools.

Mr McKeown said there is "no doubt it could have a role to play".

He said that the INTO would have more faith in decisions if they were based on evidence from schools and 'the safety and well-being of pupils in our schools trumps everything else".

"The best thing to do is to be cautious and [ensure] a principal has access to immediate quality public health advice and are not left waiting for [cases to rise]," he added.

In Northern Ireland, seven further deaths of patients who had previously tested positive for Covid-19 have been reported.

The Department of Health there also reported another 1,321 cases of the virus.

This morning, there were 351 Covid-positive patients in hospital, of whom 34 were in intensive care.