Minister for Health Stephen Donnelly has warned that the situation would get worse before it gets better as the number of Covid-19 cases over the past week is the fourth highest since the start of the pandemic.

The minister called for a "real national effort" by people to stick to public health measures.

Asked about calls from the late night sector for a two-week grace period before implementing a ticketing system, Minister Donnelly said that talks would continue between Government officials and industry representatives, but he did feel that that Government had "gone quite far in terms of the hospitality sector".

Speaking as he arrived for a Cabinet meeting this morning, Mr Donnelly said the new rules were designed to keep patrons safe and said initial reports from last weekend suggest there was a high level of compliance among operators in the night-time economy.

Tánaiste Leo Varadkar said projections from the National Public Health Emergency Team (NPHET) suggest that the number of cases should peak in the next couple of weeks.

He said projections suggest that the number of people in hospital and ICU should start to fall before December, but there is no guarantee of that.

"It's not an inevitability that cases and hospitalisations will be falling into Christmas. A lot of it will depend on what we all do as a society between now and then."

He said they will have a good idea within the next two or three weeks whether the number of cases has peaked or not.

Mr Varadkar would not speculate on Christmas saying it is now October. "Let's concentrate on the next few weeks first," he added.

Earlier, Green Party leader Eamon Ryan said he does not expect to see the reimposition of Covid-19 restrictions, despite growing case numbers.

Minister Ryan said he believes that this view was shared by all present at a meeting of the Cabinet Covid Committee last night, which was attended by Chief Medical Officer Dr Tony Holohan.

The minister said personal and sectoral responsibility was important to manage the disease.

Minister Eamon Ryan has said he doesn't expect to see the reimposition of Covid-19 restrictions, despite growing case numbers.

He added that personal and sectoral responsibility was important to manage the disease | Read more: https://t.co/pYH5GXzC06 pic.twitter.com/CesqLGqJES

Speaking on RTÉ's Morning Ireland, he said this will affect waiting times for other hospital services, primarily elective surgical procedures.

Today, there are 503 patients in hospital with the virus of whom 101 people are in ICU.

Mr Woods said he is hoping that the number of Covid cases will not rise as high as predicted under worst case scenarios modelled by Chair of NPHET's Epidemiological Modelling Advisory Group Professor Philip Nolan.

He said there are currently around 1,800 healthcare staff out on leave with Covid related illness which "is a concerning figure".

Meanwhile, a consultant in intensive care medicine has said that an increase in the number of Covid patients in ICU who are vaccinated does not necessarily mean that vaccines are not working.

But there are a group of patients – particularly those in older age groups or with weakened immune systems – who may not benefit as much from the vaccine and may require a booster.

Dr Motherway added that since the first surge of Covid-19, when all scheduled care was deferred, they have, in most hospitals, tried to run scheduled high-risk care at the same time as providing Covid care.

"It's really important that we try and continue that level of care, but if we end up having a major surge in Covid cases, we may not have the capacity to do that, and that may need to be deferred or some of it done off site in private hospitals," she said.

"It is really important we try and provide both, but that will be a challenge."

'The flu is coming'

The Chair of the GP Committee of the Irish Medical Organisation has appealed to people to get their flu vaccine this year.

Dr Denis McCauley said GP practices are seeing a lot of the Respiratory Syncytial Virus (RSV), which can present as a wheeze in children or a dry cough in adults, and this along with the rise in Covid cases is putting the hospital system under pressure.

Speaking on RTÉ's Today with Claire Byrne, he said the particular flu strain he is concerned about, which can cause severe illness, comes every ten years or so.

He said there is always cross cover to a certain extent with the vaccine, adding, "every year it is a sort of Russian Roulette, they're hoping that the three to four viruses they choose in the flu vaccine will cover the flu that eventually comes and I think in this one they have got it right".

Dr McCauley said there was a high uptake of the flu vaccine last year, but people seemed to be "vaccined out" and disappointed over the rise in Covid-19 cases.

"This is the beginning of the flu season, the flu is coming, please get your flu vaccine and if you're in at risk group you get it for free from your GP," he said.

The Chair of the GP Committee of the Irish Medical Organisation also appealed to people to get their flu vaccine. 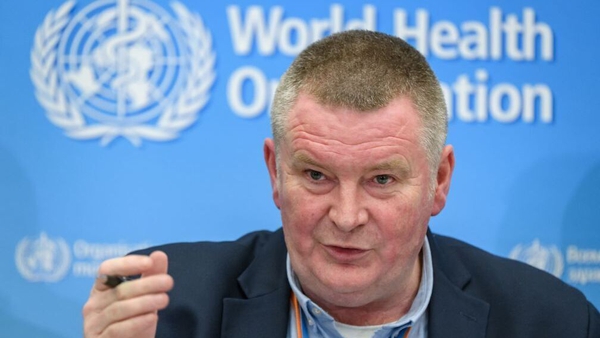