Portugal has decided to loosen restrictions on the number of people allowed in restaurants and cultural venues two weeks earlier than planned, a government minister said, as the vaccination campaign moved faster than anticipated.

Cabinet Minister Mariana Vieira da Silva said the number of people allowed to sit together inside restaurants or cafes has risen from six to eight, and from 10 to 15 for outside seating.

Cultural events, weddings and baptisms can fill up to 75% of the venue's capacity, up from 50%. Cultural venues, restaurants and other businesses can stay open until 2am.

"The pandemic is not over," she told a news conference. "It has surprised us with new variants we did not expect. It is our responsibility to continue monitoring its evolution and maintaining necessary behaviours to control the pandemic."

Negative tests or a digital certificates remain a requirement for dining indoors on weekends and holidays, and staying at hotels.

Portugal ramped up its vaccination campaign over the summer after a slow start and as the surge of the Delta variant in June worried authorities after high levels of contagion earlier this year.

Cases have plateaued since the end of July at around 3,000 a day. The reproduction rate has risen slightly but remains below 1, government data showed, indicating that the spread of the pandemic is slowing.

70% of the population is fully vaccinated, health ministry data shows. Vaccination of 12-15 year-olds is due to begin tomorrow, with the aim of getting the age group fully vaccinated by the beginning of the school year.

Belgium will scrap restrictions on restaurants and cafés, allowing them to operate under their usual hours as part of the government's reopening plan and as more than two-thirds of the population have been vaccinated.

But the measures, which will take effect on 1 September, will not apply to Brussels, because of the low vaccination rate in some parts of the capital city.

Prime Minister Alexander De Croo urged Belgians who have yet to get their jabs to do so as soon as possible, adding that vaccination would be mandatory for healthcare workers.

"Today, more than eight out of 10 adults are fully vaccinated. We can now take this further step," he told a news conference.

While there will be no limits on the number of people sitting together at a table and no social distancing curbs, restaurant diners and café goers will still have to wear masks.

Restrictions and mask wearing requirements will be scraped for indoor events with up to 200 people and up to 400 for outdoor events.

Events exceeding those numbers will only be open to people who have been vaccinated and have a negative virus test or have recovered from the virus.

Nightclubs will be allowed to reopen on 1 October.

72% of the Belgian population has received at least one vaccine dose compared with 62% of young people aged between 12-17, according to official figures.

Sydney extended its two-month-old lockdown for another month and introduced a partial curfew, as Australia's largest city struggled to contain a fast-spreading coronavirus outbreak.

New South Wales premier Gladys Berejiklian announced the "difficult" decision, telling the city's population of five million it was time to "bunker down".

"Unfortunately the case numbers continue to grow," she said. "This is what life will look like for most of us until the end of September."

For much of the pandemic, Sydney saw very few virus cases.

But the city is now reporting more than 600 cases each day - straining contact tracing efforts - and that number shows little sign of shrinking.

Stay-at-home orders will now remain in place across the city until the end of September and residents in virus hotspots will also be subject to a nighttime curfew and limited to one hour of outdoor exercise a day.

With the number of deaths rising steadily and the virus spreading to regional areas, Australia is racing to get jabs in arms.

Just 30% of the population is currently fully vaccinated.

Meanwhile, there are growing concerns about vulnerable Aboriginal communities in the New South Wales Outback, where the virus is now spreading.

The entire population of Wilcannia - a small town ringed by several ancient Aboriginal sites - has been asked to get tested after a funeral was identified as a potential super-spreader event.

A local health department spokesman said officials were going door-to-door urging locals to get tested for the virus, while a sports field has been converted into a testing site.

Early in the pandemic, Wilcannia residents had put up signs on the town's limits asking travellers not to stop - fearing the virus could obliterate an already vulnerable community.

Authorities in New South Wales are also facing growing anger from other Australian states, where the virus cases linked to the Sydney outbreak have emerged.

Israeli Prime Minister Naftali Bennett has received a third shot of Pfizer/BioNtech's Covid vaccine, after Israel extended its booster campaign for people over 40 to try to curb the Delta coronavirus variant.

New cases in Israel have surged since Delta's emergence and Mr Bennett, 49, has sought to avoid a national lockdown by ramping up third doses.

People over 60 began receiving third doses in July, before the minimum age of eligibility was dropped to 50.

The Health Ministry said boosters would now be administered to people over 40 whose second shot was at least five months ago.

It recommended teachers, health workers, carers of the elderly, and pregnant women of all ages have the shot.

"If you go get vaccinated with a third shot, we will be able to avoid a fourth lockdown," Mr Bennett said before he was shown live on social media receiving his shot. He said Israel would share its data. 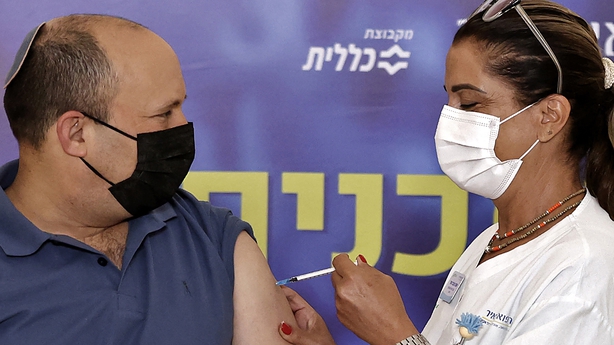 Over 1 million of Israel's 9.3 million population has received a third shot, which an Israeli healthcare provider said was 86% effective in preventing infection.

Israeli health officials have said they are seeing initial signs that the booster campaign may be slowing the rate at which cases are climbing.

Jamaica will prohibit residents from leaving their homes for seven days spread over three weekends to contain an upsurge in coronavirus infections and shield its healthcare system, Prime Minister Andrew Holness has said.

The Caribbean nation has been battling a third wave of infections, with the presence of the highly contagious Delta variant confirmed on the island.

"Our case numbers are unacceptably high and rising, and the rate of hospitalisation is beyond - and I want to stress this - beyond the capacity of our health system, to cope," Mr Holness told a virtual news conference.

More than 550 people are hospitalised with Covid-19 in the nation of almost three million people. To date, nearly 60,000 people have been infected with the coronavirus and more than 1,300 people have died.

Officials are concerned the disease is widespread, with a seven-day average positivity rate of 39%. The rate spiked after authorities eased containment measures last month.

"It is not going well right now, and we are really going to have to put in some serious measures to get the numbers down quickly," said Chief Medical Officer Jacquiline Bisasor-Mckenzie, who also spoke at the news conference.

Jamaica is to start its restrictions on movement tomorrow, with the first lockdown lasting three days, Mr Holness said. There will be an identical three-day ban on movement the following weekend, and a one-day lockdown on Sunday 5 September.

Jamaicans will be required to remain at home unless they are essential workers, although there will be some flexibility for citizens who have international travel plans, or appointments for a vaccination.

The country's vaccination efforts have been sluggish, with only 5% of the population fully vaccinated.

Vietnam's business hub Ho Chi Minh City has announced that its residents will be prohibited from leaving their homes, as the country's biggest city turns to drastic measures to slow a spiralling rate of coronavirus deaths.

Vietnam's toughest order yet comes amid a spike in fatalities and infections, despite weeks of lockdown measures aimed at limiting movement in the city of 9 million people, the epicentre of the country's outbreak.

"We are asking people to stay where you are, not to go outside. Each home, company, factory should be an anti-virus fort," the deputy head of the city's coronavirus authority, said.

The details of the order, which takes effect on Monday, have yet to be announced.

It is hoped that the curb on movement should reduce infections and give authorities a chance to focus on treating gravely ill patients. 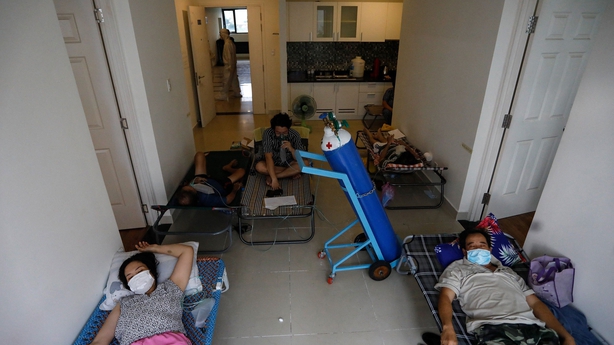 Vietnam has been slow to procure vaccines and until late April had one of the world's best containment records, having logged just 35 deaths and less than 3,000 cases as of 1 May.

But that has since jumped to over 312,000 cases and 7,150d eaths, with about half of the infections and 80% of fatalities in Ho Chi Minh City alone.

Testing and vaccinations will continue during the order.

More than half of Ho Chi Minh City residents have received at least one dose of a Covid-19 vaccine, but the national vaccination rate is one of the lowest in Asia.

South Korea has extended its social distancing curbs for two weeks amid a surge in Covid cases, while allowing vaccinated people some latitude, its prime minister has said.

The country's fourth Covid-19 wave has shown few signs of abating six weeks after the toughest Level 4 distancing rules, which include a ban on gatherings of more than two people after 6pm were imposed in the greater Seoul area.

As part of the extended restrictions, authorities will require restaurants and cafés in the metropolitan area to close an hour earlier at 9pm until 5 September, Prime Minister Kim Boo-kyum told a Covid response meeting. 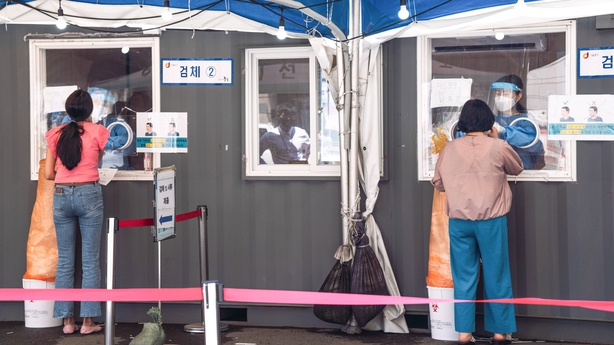 In the same region, where previously only two people could gather after 6pm, one or two other fully vaccinated people can now join them, 14 days after their last shot, Mr Kim said.

These incentives are aimed at encouraging vaccinations and boosting the economy, especially hospitality businesses that have been hit hardest by prolonged measures.

South Korea has given 48.3% of its 52 million population at least one vaccine dose, and 21.6% are fully vaccinated. It aims to fully immunise 70% by October.

Helped largely by vaccinating the elderly and the vulnerable, the country has not seen a significant increase in Covid-related deaths, with a mortality rate of 0.94%, but the number of severe and critical cases have been on the rise, reaching 385 as of yesterday.