The Minister for Health has said that he has received advice from National Immunisation Advisory Committee (NIAC) that vaccines can be mixed in certain circumstances.

Stephen Donnelly said it is good news for people who have received one dose of AstraZeneca and, for various reasons, have a preference for an mRNA vaccine for their second dose.

Speaking at a Covid-19 test centre in Ardee, Co Louth, Mr Donnelly said he has authorised the advice from NIAC, which was passed on to him by Chief Medical Officer Dr Tony Holohan.

He said the Department of Health will be working very closely with the Health Service Executive and the vaccine task force on "ambitious" plans for a booster shot roll-out and timelines for this are being worked on.

Mr Donnelly said NIAC's advice is for boosters to be given around the same time as the flu shot.

"That would normally happen around the last week of September, first week of October," he said.

"NIAC are currently looking at the details of any potential booster campaign and I expect to receive an advice from that next week from NIAC, which will allow us to proceed with more detailed planning and give people a sense of when they can expect a booster and which group."

Earlier, the HSE National Lead for the Vaccine Programme described the response to the Covid-19 vaccination roll-out as "phenomenal".

Mr McCalllion said that over the coming weeks the gap between people who are partially vaccinated and those who are fully vaccinated will close as people get their second doses.

He encouraged anyone who is partially vaccinated to come forward for their second dose and said they are not seeing anything at the moment that would suggest that people will not do that.

It is important to get the maximum coverage in the population to protect people individually and collectively, he said. 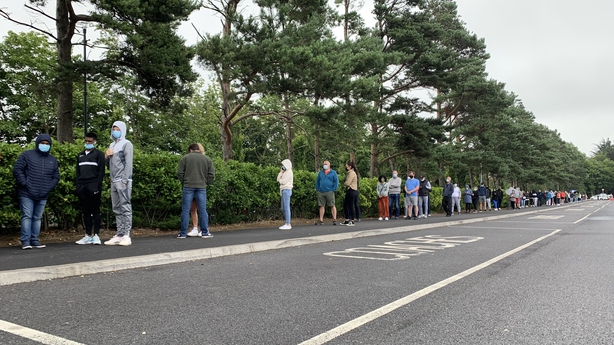 In relation to the HSE's preparation for vaccine booster shots, he said they take their advice from NIAC. He said NIAC has provided "good, solid advice" previously and has always taken an evidence-based approach.

"We will get final advice from them probably over the coming weeks," Mr McCallion said.

"They review the evidence on an ongoing basis. We've had some preliminary advice and as a result of that we've been doing some planning operationally.

"There may be a very small window between when final advice is received and when we actually have to put in place a booster programme."

Mr McCallion said they are also looking at how that will operate alongside their normal flu vaccination campaign.

Meanwhile, HSE Chief Executive Paul Reid has said that 82% of adults in Ireland are now fully vaccinated, with 90% having received at least one dose of a vaccine.

In a post on Twitter, he said over 6.4 million vaccines have been administered to date and almost 100,000 children aged 12-15 have registered for a vaccine.

Now over 6.4M vaccines administered here with 82% of adults fully vaccinated & 90% partially. Continued great progress too on the 12-15 year olds, with almost 100,000 registered & 47,000 administered. The vaccines are working & give us a pathway to a brighter future. @HSELive

Meanwhile, the number of patients in hospital with Covid-19 has reduced by 14 to 248, according to the latest figures.

The HSE said 51 of these patients are being treated in intensive care units.