Thai police used tear gas, water cannon and rubber bullets as they tried to stop protesters from marching on the office of Prime Minister PrayuthChan-ocha calling for him to resign.

More than 1,000 protesters took part in the demonstration.

The kingdom is currently facing its worst-ever Covid-19 wave, registering record numbers of cases daily as hospitals buckle under pressure.

Exacerbating the toll has been the government's slow procurement of vaccines for the public, which has drawn criticism from all sides as Thailand's economy is hit by increasingly severe restrictions on businesses.

Defying rules prohibiting gatherings of more than five people, protesters piled mock body bags with red paint near the intersection of the capital's Democracy Monument ahead of their march on Government House.

They were led by a frontline group wearing gas masks and hard hats and were joined by motorbike drivers who hoisted the body bags on their vehicles.

A giant banner of the former military chief - mastermind of a 2014 coup - was unfurled on the road, with protesters then stomping on his face. 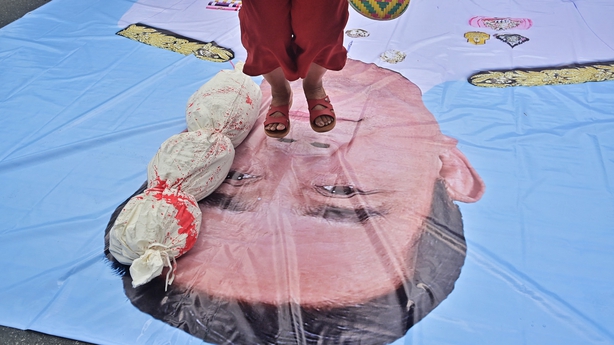 Mr Prayut managed to hold onto power after 2019 elections - which were governed under an army-scripted constitution - while popular opposition figures were increasingly hit with legal troubles.

By mid-2020, public discontent kicked off a rousing pro-democracy movement partly inspired by their counterparts in Hong Kong.

Exactly a year ago, thousands amassed at Democracy Monument to call for Mr Prayut's resignation, the rewriting of the constitution, and for reforms to the kingdom's long-unassailable monarchy.

It marked the beginning of a movement that has widened the discourse on taboo topics, including the role of the royal family - protected under a draconian defamation law.

But as the impact of Covid-19 rapidly chipped away at Thailand's economy, the government's handling of the pandemic has become one of the movement's main grievances. 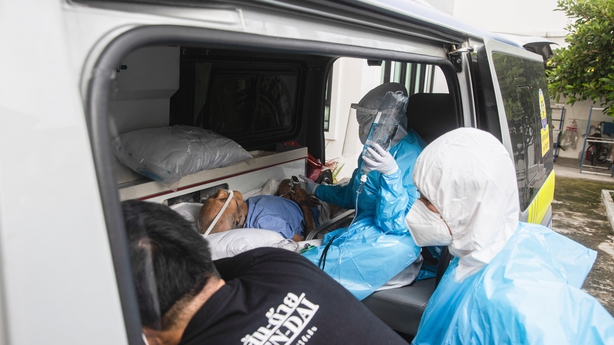 Thailand announced earlier this week it would pair a dose of Chinese-made Sinovac vaccine with the UK-developed AstraZeneca after authorities found that hundreds of medical staff who received Sinovac jabs had contracted the virus.

"You do not need to do any mix-and-match vaccines - just give us good vaccines," demanded a young protester.