Two Australian apartment blocks have been placed under strict lockdown with residents barred from leaving, as authorities stepped up efforts to curb a fast-growing coronavirus outbreak.

Police were posted outside an apartment block in Sydney's Bondi neighbourhood, where nine people have tested positive for the virus, with movement in and out of the building restricted.

Sydney's five million residents are currently in their third week of a partial lockdown as authorities try to stamp out the spread of the virus in the community.

Residents in Australia's largest city are allowed to leave home for exercise, essential shopping, work or health reasons, but are encouraged to remain at home.

Tougher restrictions are placed on people who have visited locations that are declared a virus hotspot, which may include mandatory 14-day quarantine.

Australia's latest Covid-19 outbreak began in mid-June and has since grown to 767 cases.

An entire apartment block in Melbourne was also placed under isolation for 14 days, after removal workers who visited from Sydney tested positive.

Authorities are now asking Australians living in other apartment buildings to wear a mask when in common areas. 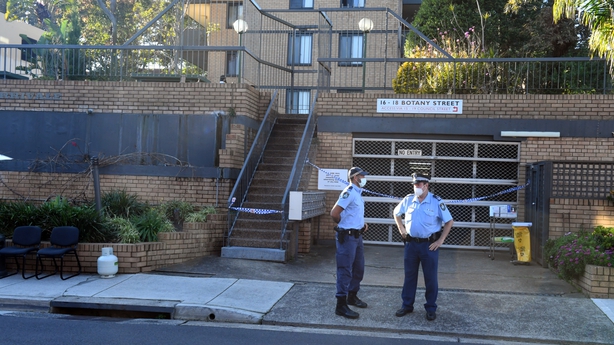 "When you're in apartment buildings, we're not wanting you to congregate in any shared spaces," said New South Wales chief health official Kerry Chant.

"We are really requiring under a public health order that you wear masks when you're transiting through common areas."

Residents in one southwest Sydney neighbourhood, where the virus is currently spreading most quickly, are now required to get tested every three days if they leave the area for work.

Under 10% of Australians have been fully vaccinated, leaving the population highly vulnerable to the quick-spreading Delta variant.

Sydney's lockdown had been scheduled to end on Friday, but an extension is now looking likely, despite a drop in new infections to 89 in the past 24 hours.

WHO warns against people mixing and matching Covid vaccines

The World Health Organization's chief scientist advised against people mixing and matching COVID-19 vaccines from different manufacturers, calling it a "dangerous trend", since more data is needed about the health impact.

Soumya Swaminathan told an online briefing: "It will be a chaotic situation in countries if citizens start deciding when and who will be taking a second, a third and a fourth dose."

Swaminathan called mixing a "data-free zone", but the WHO clarified that some data was available and more was expected.

Its Strategic Advisory Group of Experts on vaccines in June said the Pfizer vaccine could be used as a second dose after an initial dose of AstraZeneca, if the latter is not available.

The results of a further clinical trial, led by the University of Oxford, will look at mixing AstraZeneca and Pfizer as well as Moderna and Novovax vaccines is underway.

A record number of French people have been booking appointments for Covid-19 jabs after President Emmanuel Macron announced restrictions on the unvaccinated, including mandatory tests to enter restaurants.

The head of the Doctolib website, the main site to book vaccination appointments, said traffic was at an all-time high following Mr Macron's televised speech on last night.

Mr Macron said anyone wanting to go out to eat or drink, take a long-distance train or visit a shopping centre would need to show a "health pass", which means either proof of vaccination or a negative test.

The pass will also be needed to attend a festival, a theatre show or a cinema screening as part of the government's strategy to tackle the surging number of new cases linked to the Delta variant.

Free Covid tests will end in September "to encourage vaccination instead of taking many tests", Mr Macron added in the speech watched by 22 million people. 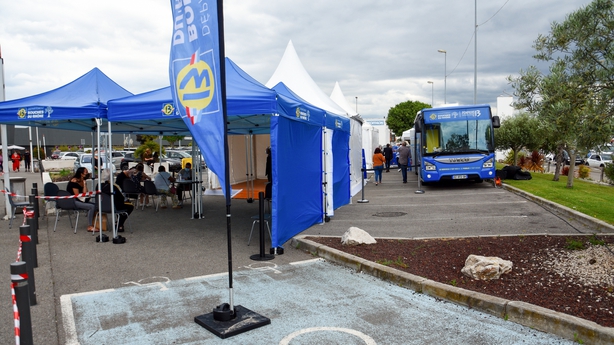 He also announced mandatory vaccinations for healthcare staff, retirement home workers and others working with vulnerable people from September.

Faced with criticism on social media that the government was forcing people to get vaccinated against their wishes, Health Minister Olivier Veran said the health pass was "not a sanction, it's not blackmail".

He said the country was far from a situation where the general population was being told the get vaccinated.

"The health pass makes your life easier," he said, adding: "We want to avoid a lockdown at all costs."

The number of new cases has been rising sharply in France, to more than 4,000 cases in recent days because of the more infectious Delta variant.

Around 35.5 million people - just over half of France's population - have received at least one vaccine dose so far, but the rate of injections has slowed in recent weeks.

South Korea's rollout of COVID-19 vaccinations to people aged 55-59 has stuttered to a week-long halt after a spike in new cases sparked a rush for shots, booking up available supplies and crashing the official reservation website.

The halt in vaccination appointments for people in the upper-50s age bracket came late on Monday, the first day that inoculation bookings were opened to under-60s.

Daily infections had risen to 1,288 today, an eighth straight day of more than 1,000 cases, Yonhap news agency reported. Among those were 563 cases in the capital of Seoul, the highest ever for that period.

While South Korea is ahead of its schedule in vaccination targets, the pace has slowed sharply in recent weeks to around 30,000 doses a day from a peak of 850,000 earlier, as it finalises shipment schedules to begin Moderna COVID-19 inoculations for people in their 50s.

"Due to strong demand, 1.85 million Moderna doses were fully booked and reservations for those who couldn't sign up will resume on 19 July," the Korea Disease Control and Prevention Agency (KDCA) said in a statement. A total of around 3.52 million people in the 55-59 age group were eligible to sign up, leaving 1.67 million still to reserve shots.

Just about 11.6% of the country's 52 million population has completed vaccination, including receiving both shots for products requiring two doses, while 30.4% have received one dose, according to government data.

German officials said coronavirus measures should be maintained until more of the population has been vaccinated, and one called England's plan to lift most restrictions despite the spread of the Delta variant "a highly risky experiment".

Alena Buyx, the head of the German Ethics Council, said compulsory vaccinations were not necessary in Germany.

But she added that restrictions should not be eased as long as not even half the population is fully vaccinated, describing England's move to lift nearly all remaining coronavirus restrictions as a "highly risky experiment".

The Washington Monument will reopen to visitors this week for the first time in six months, according to the National Park Service, as the US capital seeks to revive its role as a tourism hub.

The national landmark honouring America's founding father shut as a security measure in January for President Joe Biden's inauguration, and was kept closed due to Covid-19 restrictions.

Deaths from the coronavirus have fallen sharply in the US in recent months, though cases are rising in some parts of the country due to patchy vaccination rates and new variants. Towering above the city sharing its name, the monument celebrates the military and political leadership of George Washington, whose Continental Army led newly-American revolutionaries to independence from Britain.

On its completion in 1884, the 170m obelisk was briefly the tallest building in the world.

A Malaysian coronavirus vaccination centre was shut down after more than 200 workers tested positive for Covid-19, authorities said, as the country's cases set a new daily record.

Malaysia is battling a serious outbreak driven by highly infectious variants, and has been under a strict lockdown since the start of June.

It has ramped up its jab drive by opening mass vaccination sites, and about 11% of the population are so far fully vaccinated while almost 25% have received a first dose.

But a vaccination centre in hard-hit Selangor state was forced to close after 204 staff and volunteers out of 453 there tested positive, said the minister in charge of the inoculation drive.

Those infected had low "viral loads" and none had serious symptoms, possibly because most workers at the site in Shah Alam city had been vaccinated, he said.

Four hundred of the workers there had been inoculated, he added, but he did not say which vaccine they had been given. Malaysia is using the Pfizer, AstraZeneca and Sinovac jabs in its roll-out.

The centre's closure led to thousands of appointments being rescheduled, but it will reopen tomorrow after sanitisation, with new staff.

The number of Delta variant Covid-19 cases in Turkey has risen to some 750 from 284 seven days ago and overall cases climbed 20% at the weekend compared to a week earlier, Health Minister Fahrettin Koca said.

Turkey eased most coronavirus-related restrictions on 1 July after daily cases tumbled from a peak above 60,000 in April to around 5,000, but Mr Koca said new figures pointed to a rise.

"These increases have emerged more in places where the level of inoculations is low," he told reporters, noting rising cases in provinces of southeast Turkey.

Mr Koca called on people to get vaccinated and said that around 61% of the adult population had received at least one dose of vaccine. He has set a target level of 70% by the time of the Eidal-Adha holiday next week.

A vaccination programme has ramped up to around a million shots per day in recent weeks, with 38 million receiving at least one dose out of a population of 84 million.