The coronavirus variant first identified in India is highly infectious and can be caught by people who have already had the disease or been only partially vaccinated, a panel of Indian government scientists said in a report published today.

Dubbed the 'Delta variant' by the World Health Organization, it is estimated to be 50% more transmissible than the coronavirus variant first found in Britain, researchers at Indian SARS-CoV-2 Genetics Consortium and the National Centre for Disease Control said.

They warned that "prior infections ... and partial vaccination are insufficient impediments to its spread, as seen in Delhi, and strong public health response will be needed globally for its containment".

The variant has spread to over 50 countries, including in the UK and Ireland.

British Prime Minister Boris Johnson has warned that its rapid spread could affect the reopening of the economy there.

India's new cases have steadily declined in large cities over the past few weeks, but rural areas remain in the grip of a disastrous second wave of infections.

Experts have warned that the country needs to ramp up the pace of vaccinations to avoid future surges in infections among its population of more than 1.3 billion people.

Under fire for a slow vaccine roll-out, Prime Minister Narendra Modi's government has been in talks with major foreign vaccine producers to boost supplies even as domestic manufacturers scramble to boost output.

Yesterday, the United States laid out a plan to share 25 million surplus Covid-19 vaccine doses with countries including India.

Experts and government officials have said vaccinations are key to opening up parts of the country that have been under lockdown for weeks.

Some states such as Delhi and Mr Modi's home state of Gujarat are gradually loosening restrictions.

In Gujarat, authorities allowed shops and other commercial establishments to remain open for longer hours from today, the Gujarat government announced.

"With states showing restraint in reopening, the economic recovery from this virus wave will be more gradual than last year," said Darren Aw, Asia Economist at Capital Economics in Singapore.

"But the slow vaccine rollout means that rapid reopening would increase the threat of renewed virus outbreaks, potentially with more contagious variants."

India today reported 132,364 new coronavirus infections over the last 24 hours, while deaths rose by 2,713 - the lowest in over a month.

The tally of infections stood at 28.6 million, the second highest in the world, and the death toll at 340,702, the health ministry said.

Experts believe the actual numbers are far higher, as the official count only registers cases where people have been tested for the virus, and in India many people have not been tested, especially in the rural areas, where some two-thirds of Indians live.

Fears of spike in cases as Delta variant detected in Melbourne

Australia's Victoria state authorities say they have detected the Delta variant, for the first time in the latest outbreak in Melbourne, stoking concerns of a major spike in cases. 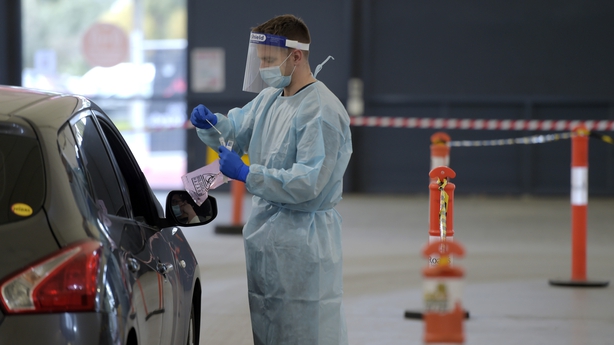 "The fact that it is a variant different to other cases means it is not related, in terms of transmission, with these cases."

Mr Sutton said the new variant had not been linked to any sequenced Covid-19 infections across Australia from hotel quarantine or elsewhere.

"It is a concern that it is not linked to other cases but we are chasing down all those primary case contacts ... and looking into where it might have been acquired," Mr Sutton said.

The Delta variant was detected in two members in a family who travelled to neighbouring New South Wales (NSW) two weeks ago while likely infectious and visited several popular tourist locations in the state's south.

Mr Sutton said it was "within the bounds of possibility" that the cases could have contracted the Delta variant in NSW but that more tests would be needed.

NSW, Australia's most populous state, has not reported any locally acquired cases in a month.

Victoria, Australia's second-most populous state, is battling to contain its latest outbreak - 64 cases since 24 May - after more than three months of no cases, placing tough restrictions on movement of people and shutting down large parts of its economy.

The government has linked all the cases to a single traveller released from quarantine after testing negative.

Melbourne is into a second week of hard lockdown after it was extended for another week until 10 June, but some curbs elsewhere were eased in the state from last night.