The Department of Health has been notified of ten further coronavirus-related deaths and 426 new cases.

The number of people with the virus being treated in intensive care is up one to 47.

Meanwhile, some people under 50 years of age will get just one vaccine dose of an mRNA vaccine, such as Pfizer or Moderna, and be considered fully-vaccinated, under the revised Government vaccination plans.

It will apply to people who had laboratory confirmed Covid-19 in the previous six months and who are not immunocompromised.

People over 50 will get their second dose as this group appear to have a less robust immune response.

The Government has accepted a recommendation from the National Immunisation Advisory Committee (NIAC) that a mRNA vaccine be offered to pregnant women between 14-36 weeks gestation, after a discussion with their obstetric specialist.

NIAC also recommended that the Johnson & Johnson and AstraZeneca vaccines be made available to people aged 50 and older, as well as other changes.

Up to now the AstraZeneca vaccine was essentially limited to people over 60.

The recommendations also mean that where a two-dose regime is a difficulty, the Johnson & Johnson vaccine can be used in certain communities, the homeless and those with addiction issues.

Minister for Health Stephen Donnelly said that all vaccines can now be used for people over 50 years and protocols will be worked out on how the vaccination recommendation for pregnant women will operate.

Dr Anne Moore, a senior lecturer at the school of biochemistry and cell biology in UCC, said the exception to the under 50 group is where it may be difficult for someone to return to receive a second dose of vaccine, such as a homeless person or a person with addiction issues.

In these instances, she said the single dose Johnson & Johnson vaccine could be used.

She said we know that this vaccine is very effective, and the chances of a rare clotting event in the few people aged under 50 who will receive it are miniscule.

Dr Moore said that in cases where people have had a confirmed Covid-19 diagnosis, there is more and more evidence to show that a single dosage will boost their immune response.

Minister for Health Stephen Donnelly is bringing recommendations from the National Immunisation Advisory Commission to Cabinet this morning on AstraZeneca and the Johnson & Johnson vaccines. He said the recommendations are 'broadly as reported' | More: https://t.co/wSlPnfIUF7 pic.twitter.com/Bgr84nTX9r

Elsewhere, the National Public Health Emergency Team (NPHET) has been meeting today to decide on its advice to Government on restrictions.

The Cabinet Covid-19 sub-committee will meet tomorrow on the issue with a full Cabinet meeting on Thursday.

Mr Donnelly said it looks like around 700,000 vaccinations will have been administered in April.

Meanwhile, Chief Medical Officer Dr Tony Holohan has said the situation with Covid-19 is concerning but currently stable, or improving.

In his most recent letter to Minister Donnelly on 22 April, published by the Department of Health, Dr Holohan said community positivity had plateaued at an elevated level over the last two weeks.

He said the situation remained fragile and any increase in close contacts represents a significant risk.

In a statement NPHET says that of the deaths reported today, one occurred in February, five in March and four this month. It says that the average age of those who died was 84, and the age range was 77-97 years.

There has been a total of 4,884 coronavirus-related deaths in Ireland, while the number of confirmed cases now stands at 247,489.

NPHET says that of the new cases notified today, 203 are men and 221 are women. 74% are under the age of 45 while the median age is 29. There have been ten additional hospitalisations in the last 24 hours. 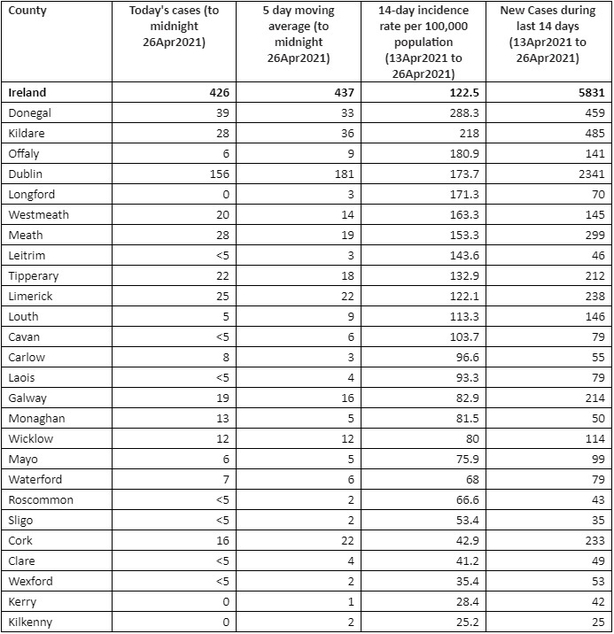 In Northern Ireland, 109 new cases of Covid-19 have been reported. There were no deaths related to the disease in the past 24 hours.

There are 62 confirmed coronavirus patients in hospital, with five in ICU.