The Government has said that it has provided clarity to the European Commission tonight about concerns raised in relation to the mandatory hotel quarantine system.

The commission sent a list of questions to Government Buildings this evening on behalf of concerned EU citizens.

The questions relate to queries about freedom of movement in the EU, how the quarantine system might infringe on them and the criteria used to determine the designated countries.

Travellers from five EU states, Austria, Belgium, France, Luxembourg and Italy, must quarantine in a hotel when they arrive in Ireland.

In a statement to RTÉ News, the European Commission said: "We understand that Ireland requires travellers coming from a "designated" country, irrespective of their nationality, to undergo a mandatory hotel quarantine.

"The commission is looking into these measures as there are some concerns in relation to the general principles of EU law, in particular proportionality and non-discrimination.

"While quarantine and testing requirements are a national competence, nevertheless, when affecting citizens' rights to free movement, such measures have to comply with general principles of EU law."

The Government is insisting it kept the commission and EU member states informed in advance of countries being added to the Category 2 list.

It said that information around the criteria used to select these countries had also been sent to the commission this evening.

On 8 April, the commission said the Government's quarantine plans appeared to be in line with recommendations approved by EU health ministers on 1 February, which introduced some restrictions on freedom of movement.

The commission said that the new restrictions related to the emerging problem of new Covid-19 variants and the new dark red category introduced by the European Centre for Disease Prevention and Control (ECDC) indicating countries where the virus was circulating at very high levels.

Travellers from dark red areas should be required to do a pre-departure Covid-19 test and then quarantine or self-isolation after arrival, the commission said at the time.

It also said on 8 April that mandatory hotel quarantine did not contravene the new recommendations.

It is understood the commission became aware of the issue when it was notified by the Department of Health last week of the hotel quarantine plans.

Speaking to RTÉ's Prime Time Minister for Health Stephen Donnelly, defended the mandatory hotel quarantine system and said he was confident it was in compliance with Irish and EU law. He said the Government would keep it under review.

Earlier, the Italian Ambassador to Ireland said the decision to put Italy on the mandatory hotel quarantine list was "discriminatory" and "excessive".

In a video message, Paulo Serpi said the move would do serious and severe harm to the Italian community living in Ireland.

Mr Serpi said he had written to Minister for Health Stephen Donnelly calling for the measure to revoked.

Passengers arriving into the Republic of Ireland from 16 additional countries are now subject to mandatory hotel quarantine with limited exemptions.

As of 4am, the list of Category 2 countries includes the US, Canada, Turkey, as well as EU members France, Belgium and Italy.

Mr Serpi said: "As you know from today, Italy will be subject to this measure of mandatory hotel quarantine, a measure that hits us and four other EU countries - France, Belgium, Austria and Luxembourg.

"With these countries in recent days we made a decisive and serious approach at the highest levels to the Department of Foreign Affairs.

"It was a joint approach because we believe these measures are excessive and do serious and severe harm to our co-nationals and in particular to our communities here in Ireland and we cannot accept this.

"As we know in the European Union the free circulation of people, goods and capital must be ensured and maintained. The movement of people is sacred. When you close the borders or place limits there must be serious and good reasons.

"I gave Minister Donnelly our national focal points to clarify in the best possible way in the quickest possible time our hopes that this measure is revoked as soon as possible."

Meanwhile, Italian citizens living in Ireland have also written to the Government saying they feel discriminated against following the recent decision.

The letter by the Italian community says the reason cannot be a generic need to keep variants out of Ireland.

The community is also calling on the Government to make public the criteria that were considered for the mandatory hotel quarantine list. 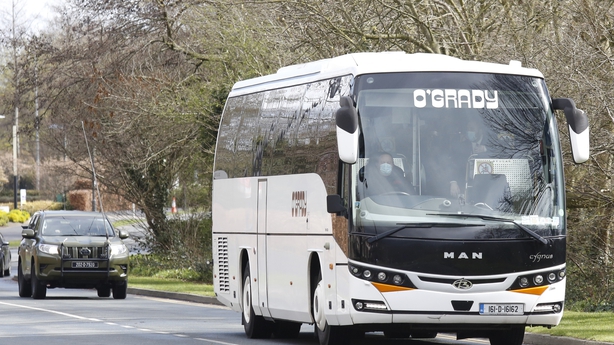 It says: "We need to know the criteria and the data that led to that decision. From the data we can check ourselves, we cannot find a logical reason why Italy is one of the few EU countries put on that MHQ list."

The letter goes on to say that many Italians have been living in Ireland for years.

It says: "The year that has just passed has been really tough for everyone in the world and for most people it was not possible to visit their families, to join them over Christmas and Easter.

"We too left elderly parents alone during times that would normally be moments of joy and reunion. We all knew very well that it was necessary and, like everyone else, we adapted to the situation as best we could."

Members of the Nigerian community in Ireland have also expressed concern at Nigeria being added to the quarantine list.

In a letter to the Taoiseach and Minister Donnelly, they said that Nigeria has been able to manage and contain the pandemic.

They asked for clarification for the decision to add Nigeria to the list.

Fans to be trialed at outdoor sports events - Taoiseach