Taoiseach Micheál Martin said the target of offering 80% of the adult population a first dose of a Covid-19 vaccine by the end of June remains on track.

But he said meeting the target of vaccinating more than 800,000 people in April would be "challenging".

Minister for Health Stephen Donnelly said the Government is "still on target" to ensure that four in every five adults, who want a Covid-19 vaccine, will be offered at least a first dose by end of June.

However, he cautioned that this week has proven it is, what he termed, "a bumpy road".

It came as Ireland's roll-out plans were hit by a delay to the Johnson & Johnson vaccine and the impact of changes to the use of the AstraZeneca jab.

However, Ireland is to receive an additional 545,000 doses of BioNTech/Pfizer Covid-19 vaccines from this month after an agreement between the EU and the pharmaceutical firms.

Mr Martin said: "[The] announcement from Pfizer is a significant boost by bringing the vaccines scheduled for quarter four into quarter two.

"We will make good progress in quarter two in terms of the vaccination programme."

He added while the Johnson & Johnson vaccine is temporarily paused, it remained to be seen if it could come back into the vaccination programme.

Mr Martin said there would be "bumps along the way", but the vaccine programme was "agile and responsive".

He said people aged 60 and 69 would receive AstraZeneca. He said "we are close" to completing the vaccination of the over-70s.

"April had been challenging due to the cancellation of AstraZeneca vaccines this week. I really feel sorry for those with underlying conditions who had their scheduled vaccine postponed," Mr Martin said.

He said the Government would listen to public health advice on spacing out Pfizer vaccines over a longer period and that would be decided over the coming week.

In a statement after the Cabinet meeting, the Government said it was "recalibrating" its approach to the vaccine programme after recent developments.

It said the immediate focus of the vaccine plan was on those at higher risk and those aged 60 and over.

Those aged 59 and under in very high risk and high-risk categories who have yet to be vaccinated will receive an alternative vaccine to the AstraZeneca vaccine, the Government said.

The Taoiseach, the Tánaiste and the Green Party leader spoke with the head of the High-Level Task Force on Covid-19 Vaccination in advance of today's Cabinet meeting.

This morning, Minister Donnelly confirmed the possibility that spacing out doses of the Pfizer vaccine was being considered.

Currently, the interval is 28 days between the first and second Pfizer dose, but some countries have extended it to 12 weeks.

An extension could allow more people to have a first vaccination. Full vaccination is only achieved after the second dose.

However, any changes would be based on advice offered by the National Immunisation Advisory Committee (NIAC).

Meanwhile, Tánaiste Leo Varadkar has said the Government was "on track to ease restrictions on the 4th of May".

In a message posted on Twitter, he said that there may have to be some and changes to the vaccine roll-out plan, but added this had already happened on numerous occasions.

Mr Varadkar said there were "lots of things to be positive about", even if there will continue to be some "twists and turns".

AstraZeneca accounts for around 22% of all the Covid-19 vaccines used in Ireland since the vaccination programme got underway.

As of Monday, 239,364 doses of the vaccine were given out, the vast majority of which were first jabs.

Karyn Moynihan, who lives in Dublin, is among those who have received one dose of the vaccine.

The kidney transplant recipient was administered her first AstraZeneca jab at the end of last month and is due to get her second vaccine in June.

Despite the concerns over rare blood clotting incidents, she has no hesitancy about getting the dose.

Karyn Moynihan said she is "not concerned" and she said she is "still very much looking forward" to getting her second vaccine in June.

"For me, it hasn't really changed my level of excitement to be honest. I'm still delighted to have gotten my first dose and to be getting my second one so soon."

On the decision to restrict the use of the AstraZeneca vaccine in people under 60, she said "it does feel like it's probably over caution, but I can understand that too because you want people to know exactly what is going on and that there is transparency."

Pat O'Gorman from Swords in Dublin is a cancer survivor and is also in Cohort 4, people who are at very high risk of severe disease from the virus.

He was among tens of thousands of people who had been expecting to receive a first AstraZeneca dose this week.

He received a text on Monday morning to confirm an appointment of a vaccination this morning, after being recommended by his consultant.

Yesterday morning, the 67-year-old was sent another text to say that appointments were cancelled, because of the issues with AstraZeneca, aside from eligible people aged between 60 and 70.

However, he said he then received a subsequent text, which said all vaccinations with AstraZeneca were cancelled.

Pat O'Gorman said "the real frustrating part is the confusion over whether I am on or not on the list."

He said "yesterday was very annoying" and he said he was "in a limbo, I'm on, I'm not on."

He said "the great excitement of being on the list and having that comfort of knowing I was going to get it done, was then half taken away, fully taken away, half offered back and then taken away."

He has called on the HSE to target people more directly, an issue which he described as "very, very frustrating."

The online vaccine registration system will open from 10am tomorrow morning on the HSE's website for the 65 to 69 age group, beginning with those aged 69.

People in this group will be vaccinated at one of the HSE vaccination centres around the country using the AstraZeneca vaccine.

A Government spokesperson said it is hoped that 65 to 69-year-olds who register for a vaccine over the next five days will receive an appointment within one to two weeks.

There was also a discussion at Cabinet today about the possibility of offering the AstraZeneca vaccine to those aged under 60 in certain circumstances.

This would involve those offered the vaccine making an assessment of the benefits and risks involved. No decision was reached, but it is likely to be considered further.

The vaccination programme has changed 23 times so far and further alterations are expected in the coming days.

Meanwhile, tens of thousands of people who expected to receive the AstraZeneca vaccine this week will have to wait for another appointment.

The HSE cancelled AstraZeneca clinics this week pending an assessment of the impact of new guidance on its use.

However, some appointments will proceed for certain people over 60 and those patients will be contacted directly. 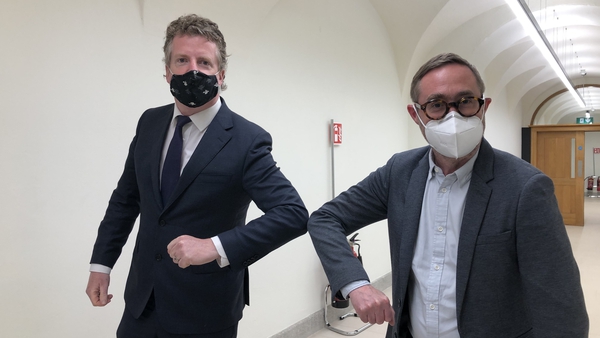