Contracting Covid-19 is "robustly associated" with an increased risk of developing mental health and neurological conditions in the six months after a diagnosis, a study suggests.

Researchers at the University of Oxford looked at the TriNetX electronic 2020 health records of more than 230,000 Covid-19 patients, mostly from the US.

Their study, published in The Lancet Psychiatry journal and said to be the largest of its kind to date, estimated that one in three Covid-19 survivors (34%) were diagnosed with a neurological or psychiatric condition within six months of being infected.

For 13% of people it was their first recorded neurological or psychiatric diagnosis, researchers found.

The findings also suggested that the incidence of such conditions rose with the severity of a coronavirus case.

It found that a neurological or psychiatric diagnosis occurred in 39% of those who were admitted to hospital, 46% of those in intensive care, and 62% in those who had encephalopathy - described as "delirium and other altered mental states" - during their Covid-19 infection.

When comparing the data with a control group and taking into account underlying health characteristics, such as age, sex, ethnicity, and existing health conditions, researchers also found that overall there was a 44% greater risk of neurological and mental health diagnoses after Covid-19 than after flu, and a 16% greater risk after Covid-19 than with other respiratory tract infections such as pneumonia.

Given the scale of the coronavirus pandemic and chronic nature of some neurological and psychiatric diagnoses, the study's authors concluded that "substantial effects on health and social care systems are likely to occur".

They argued that "urgent" research was needed to understand how and why such disorders occur and how they can be treated.

Paul Harrison, professor of psychiatry at the University of Oxford and the study's lead author, said: "These are real-world data from a large number of patients.

"They confirm the high rates of psychiatric diagnoses after Covid-19, and show that serious disorders affecting the nervous system (such as stroke and dementia) occur too.

"While the latter are much rarer, they are significant, especially in those who had severe Covid-19.

"Although the individual risks for most disorders are small, the effect across the whole population may be substantial for health and social care systems due to the scale of the pandemic and that many of these conditions are chronic.

"As a result, health care systems need to be resourced to deal with the anticipated need, both within primary and secondary care services."

For the peer-reviewed observational study, researchers looked at the incidence of 14 neurological and mental health disorders among 236,379 patients over the age of ten who were infected with Covid-19 on or after 20 January 2020 and who were still alive on 13 December that year.

In the Covid-19 group, researchers found anxiety disorders occurred among 17% of all patients, while 14% developed mood disorders, 7% had substance misuse disorders and 5% insomnia.

Meanwhile, the incidence of neurological conditions appeared lower, with 0.6% having a brain haemorrhage, 2.1% ischaemic stroke and 0.7% dementia.

Report co-author Dr Max Taquet, NIHR academic clinical fellow in psychiatry at the University of Oxford, said that while a diagnosis such as psychosis or dementia was less likely to occur in all patients with Covid-19, the rate "increased quite dramatically" with a more severe Covid-19 illness.

He highlighted that one in 14 patients (7%) with encephalopathy were found to have a psychosis diagnosis and one in 20 (5%) had dementia, compared to 1.4% and 0.7% of all patients with Covid-19 respectively.

Dr Taquet said another "concerning" finding was that one in 50 patients (2%) with Covid-19 went on to have an ischaemic stroke within six months, where a blood clot affects the brain, which increased to one in 11 patients (9%) with encephalopathy.

Overall, the authors concluded that Covid-19 does lead to a greater risk of neurological and psychiatric disorders when compared with flu and other respiratory tract infections, but there was no clear evidence this was the case for some conditions such as parkinsonism and Guillain-Barre syndrome.

Prof Harrison told a briefing of journalists: "Our view is that a lot of the mental health consequences of Covid are ... to do with the stress of knowing that one has had Covid and all the implications that go with that, rather than it being a direct effect, for example, of the virus on the brain, or the immune response to the virus on the brain." 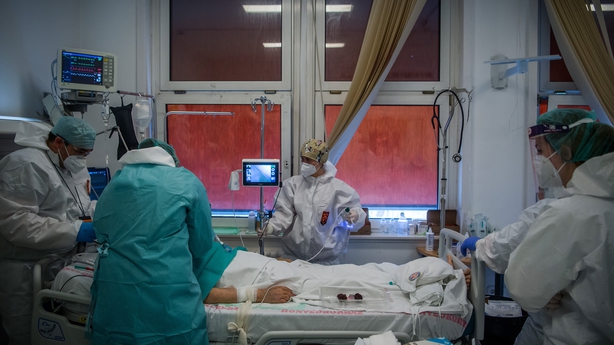 Another study author, Masud Husain, professor of neurology and cognitive neuroscience at the University of Oxford, added that although it was known coronavirus "can access the brain", the evidence it affects neurons is "quite low".

He added there was a need to be "careful" over whether conditions such as dementia and strokes were "a direct consequence of the virus or whether the effects of being ill on clotting, for example, on the immune system can have an effect".

Researchers noted that their study was limited by the unknown completeness and accuracy of the electronic health records and that the results may not apply to people who had Covid-19 but were not diagnosed with the illness.

The severity of the neurological and psychiatric disorders was also not known, nor whether patients recovered and what happened to them after six months.

Professor Paul Crawford, director of the Centre for Social Futures, Institute of Mental Health, Nottingham University, said there was a need to determine whether the study's finding of "substantial neurological and psychiatric morbidity in the six months after Covid-19 infection" were the result of the infection or "the effects of prolonged confinement and isolation ... endured during the pandemic".

He said: "We know from penal, remote living and aerospace studies, not least in relation to long-duration flight, that such conditionality can affect mental state in terms of experiencing anxiety, depression, lassitude, irritability and other cognitive disturbances."

On the finding of higher likelihood of neurological and psychiatric conditions among those with Covid-19, Dr Musa Sami, clinical associate professor in psychiatry at Nottingham University, commented: "What we do not fully understand at the moment is the mechanism by which Covid-19 has this effect: psychological stress, longer stays in hospital and characteristics of the illness itself may play a part."