The Department of Health has been notified of five further coronavirus-related deaths and 423 new cases.

The number of people being treated for Covid-19 in intensive care is down four to 56.

Overall, there are 232 people in hospital with the virus. There have been 13 additional admissions in the past 24 hours.

In a statement, the National Public Health Emergency Team said that four of the deaths occurred in April, and one in February. 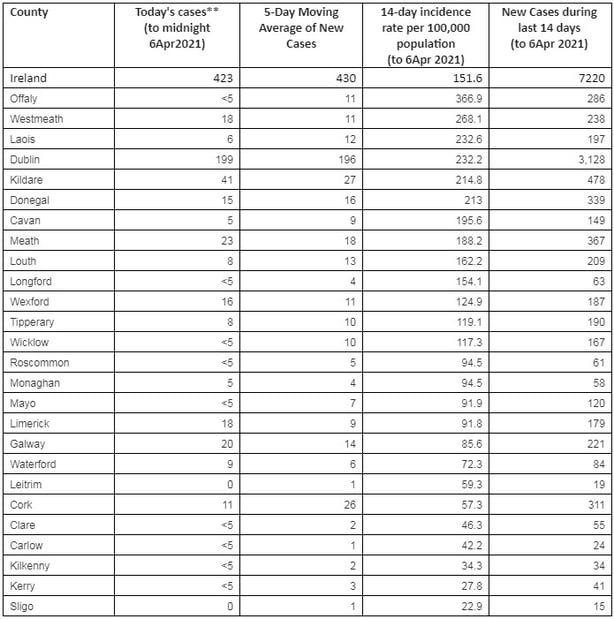 Almost four million doses of Covid-19 vaccines are expected into the country over the next three months, in what the Taoiseach has described as a "significant step change" in the vaccination roll out.

On the 100th day of the country's vaccination programme, Micheál Martin said 930,000 doses would come into the country this month, with 1.2 million expected in May and 1.7 million in June.

He said an online portal for those aged between 65 and 69 to register for vaccination would open on 19 April and vaccination for that age group would also begin that week.

The Taoiseach said his sense was that the vast majority of the Irish people appreciated the vaccination programme despite the "breaches of trust" that had occurred.

He said the decision to change the way the vaccine was being rolled out to prioritise people on the basis of age was based on science, and he asked people to "stay patient".

The Chair of the National Vaccines Taskforce said the supply of vaccines would be ramping up right throughout the next three months and by the end of April, there should be around 200,000 vaccines "and above" being administered per week.

Prof Brian MacCraith said all the indicators showed the supply of vaccines from the various companies had stabilised although, he said, experience had shown that "one could never tell".

The supply from Pfizer had been "rock solid" week on week and he said that AstraZeneca had given assurances they would meet targets this quarter.

Difficulties in manufacturing on the part of the companies, as well as recommendations from the European Medicines Agency and the National Immunisation Advisory Committee, could disturb the planned ramping up. But we would have to wait and see what happened, he said.

20% of Ireland's projected supply of vaccines in quarter two is due to come from AstraZeneca, the Taoiseach said.

HSE CEO Paul Reid has said that the health service was well resourced with vaccinators for the stage it was currently at.

The latest HSE vaccination figures show that 936,087 doses were administered up to last Sunday.

Around 1,000 new vaccinators had started work or were just about to, another 800 were in the final process of validation he said, and there were another 1700 in the pipeline behind them.

The delivery of vaccines to 1300 GP practices had "bedded down really well" he said and the national ambulance service had vaccinated 1100 patients nationally who were not in a position to come into vaccination centres.

860,000 vaccines would be administered through April and the number of vaccination centres would increase from 14 to 30 he said.

GPs would be involved with the current vaccination of people with serious underlying conditions from next week and that programme would continue into early May.

The millionth dose of Covid-19 vaccine is expected to be administered this week.

The Minister for Health said that as of yesterday, "very slightly in excess of one million vaccines had left the depots" and distributed around the country.

Stephen Donnelly said we are "exactly where we could be" with the roll out.

"What we can do is get the vaccine out as quickly as they arrive, 95% of vaccines that are arriving are getting into people's arms within 7 days, that's the bit we can control," he said.

He said the expectation was that Ireland would receive 1.25 million doses of vaccine by the last day of March, and that what was actually delivered was 1.187 million doses.

Minister Donnelly was speaking at the Aviva Stadium in Dublin where medically vulnerable people are getting their vaccines today.

He also told RTÉ's News at One that an average of one million doses will be administered in April, May and June, and it will be "a bit less this month, a bit more in May and quite a bit more in June".

Mr Donnelly said that that the effectiveness of the vaccines is "astonishing" and that last week was the first week where there were no new clusters recorded in nursing homes.

He said there has been a reduction in infection among healthcare workers of 97.5%.

The latest figures show a reduction in the number of patients in hospital with Covid-19.

There were 232 patients with the disease in hospital, according to the HSE.

The number of patients with Covid-19 in intensive care units was unchanged at 58.

The hospitals caring for the largest number of patients are the Mater in Dublin with 27, Beaumont with 24 and Tallaght University Hospital with 23.

Around 22 hospitals have nine or fewer Covid-19 patients.

Health Service Executive Chief Executive Paul Reid said progress is being made although the numbers are "still too high".

Hospital #Covid19 patients down to 232 with 58 in ICU. Although still too high, with the risk of transmission levels in the community, we're making really good progress. With the vaccination programme, new testing & tracing initiatives & public support we'll get there. @HSELive

In Northern Ireland, there were no further coronavirus deaths recorded during the past 24 hours, with the official death toll remaining at 2,121.

88 new cases of the disease have been confirmed by the Department of Health.

The area with the highest rate is currently Antrim & Newtownabbey on 40.0, while the lowest Fermanagh & Omagh on 9.4.

The total number of Covid-19 vaccine doses administered in Northern Ireland is now 958,783. 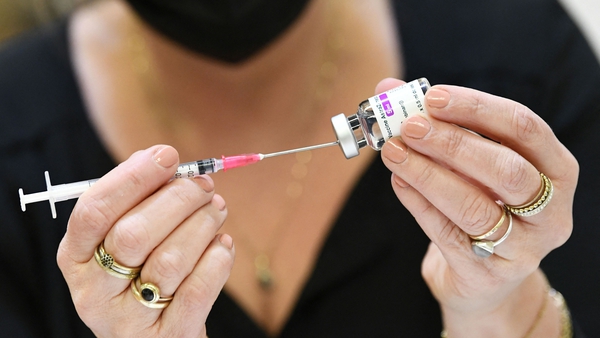