The Department of Health has been notified of two further deaths of people with Covid-19 and 511 new confirmed cases.

There has now been a total of 4,715 Covid-19 related deaths in Ireland and 237,695 confirmed cases, which includes the denotification of three confirmed cases.

It comes as latest figures show yesterday, Good Friday, was one of the biggest days for vaccinations to date, with more than 27,000 doses administered on one day.

Meanwhile, the head of the Health Service Executive Paul Reid has said that a "great milestone" of one million vaccine doses administered to people in Ireland will be reached some time next week.

Mr Reid was speaking at The Helix in Dublin City University today, where more than 6,500 doses were to be given to people aged over 70. This is a combination of first and second doses for this age group.

The remaining 175,000 doses that were due to be delivered in quarter one arrived into the country on Thursday, mainly comprising of the AstraZeneca vaccine.

Mr Reid reiterated that it is expected that Ireland will receive an average of one million vaccine doses per month over April, May, and June.

When asked about various reports of vaccines being delivered out of sequence on the priority list, Mr Reid said that those incidences were unfortunate but that they are minor in the context of the wider roll-out.

He said that the public should have great confidence in the roll-out overall.

All across the country today, thousands more of our most vulnerable will receive either their 1st or 2nd #COVID19 vaccine. We are on the exit route from an awful year if we can safely steer the course for a little while. Happy & Safe Easter from @HSELive.

GPs from some of the smaller Dublin practices will continue to operate out of the Helix vaccination hub at Dublin City University throughout this weekend where they will administer 6,500 doses of the Pfizer vaccine to the over 70s.

The GP-led vaccination centres at Munster Technology University in Cork and Merlin Park in Galway will also be in operation to administer another 2,700 vaccinations to same age group.

In addition, vaccinations for people with medical conditions that put them at very high risk of severe illness will be carried out at Beaumont Hospital, Connolly Hospital Blanchardstown, the Aviva stadium in Dublin, and at the Radisson Hotel in Limerick.

About 1,000 housebound over 70s have so far been vaccinated by the National Ambulance Service.

Another 258 are due to be vaccinated in Cork and Kerry this weekend.

It comes as the latest figures show that as of 8am today there were 242 patients with Covid-19 in hospitals.

The figure was down 22 on the same time yesterday. There were 10 new admissions for Covid-19 between 8am today and 8am yesterday. During that same time, 26 people were discharged.

The bulk of these patients were in Dublin hospitals, with 26 patients at the Mater, 25 at St James's and 24 each at Beaumont and Tallaght University Hospital.

There were 18 people admitted to hospital with the virus over the previous 24 hours.

3,640 people with no symptoms were tested for the virus over the past two days at the seven temporary walk-in test centres now open at Balbriggan, Finglas, Navan, Athlone, Ballinasloe, Naas and Crumlin.

Over 14,000 asymptomatic people were tested at similar centres last week with 3% testing positive.

Meanwhile, the potential for a change to an age-based vaccination system was discussed as far back as last week by the Covid-19 Oversight Group, RTÉ News has confirmed.

The group is chaired by the Secretary General to the Government, other relevant Government department secretaries, and also includes the HSE Chief Paul Reid and Deputy Chief Medical Officer at the Department of Health Ronan Glynn.

The issue was also discussed at the Cabinet Sub-Committee on Covid-19 on Monday night, before the full Cabinet meeting on Tuesday afternoon.

The medical and scientific advice, recommending the change from the National Immunisation Advisory Committee, was also available to the Cabinet Sub-Committee meeting on Monday and to the full Cabinet on Tuesday.

Separately, an assistant professor of virology at UCD said there are now Covid-19 variants being detected in Ireland through community transmission, unrelated to travel.

"That suggests that these variants are circulating in the community," he said.

Dr Barry added that given only a small fraction of cases are being sequenced every week, these numbers were "probably not even a full reflection", and were lower than the actual number in circulation.

"It is concerning that these are now beginning to spread, and we can't really, or don’t seem to be able to, track where they’re coming from," he said.

Dr Barry said the worry with the variants was twofold, in that the efficacy of current vaccines in use "might not be as good" with other variants. He said the variants in future "could pose a challenge".

He said data coming from Brazil showed the P1 variant spreads faster than the B117 variant, first identified in the UK, and showed that the P1 was three-times more virulent.

"This is something we really need to control better," he added.

"To put it bluntly, we're not doing enough to protect ourselves against not only these variants, but the virus in general. We know the formula that works to control and to protect us against this virus, and those measures are individual ... but is about being able to track where this is coming from", he said.

No further coronavirus deaths have been recorded in Northern Ireland during the past 24 hours, so the official Department of Health toll remains 2,116.

There is currently no figure for the latest number of confirmed coronavirus inpatients in hospital due to technical issues with the Department of Health dashboard, but there are 16 in ICU, 10 of whom are on ventilators. 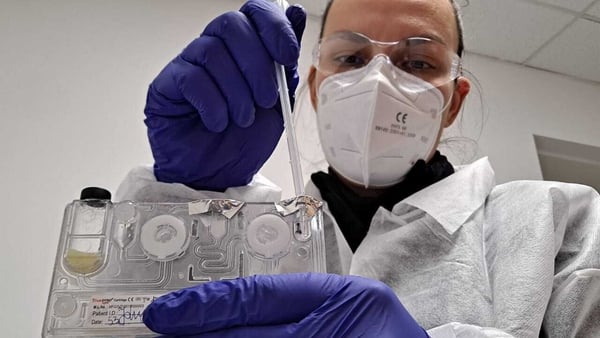