There has been no new Covid-19 deaths reported on the island of Ireland today.

The Department of Health has been notified of an additional 384 cases of Covid-19. This brings the total number of confirmed cases in the Republic to 226,741. 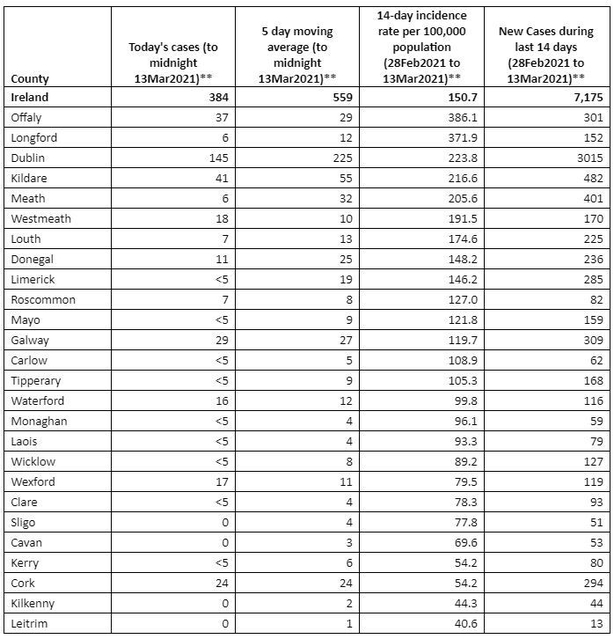 As of 8am today, 349 Covid-19 patients are in hospital, of which 86 are in ICU. There has been 17 additional hospitalisations in the past 24 hours.

In Northern Ireland, the Department of Health said there had been 143 new cases from tests on 1,325 individuals in the past 24 hours.

There are 180 confirmed Coronavirus patients in hospitals in the North, with 23 in ICU, 18 of whom are on ventilators.

In the Republic, the average number of new Covid-19 cases has risen steadily over the past five days, according to figures released by the Health Protection Surveillance Centre.

Yesterday marked the fifth day in a row that the five-day moving average, which charts the progress of the disease while smoothing out daily and weekend fluctuations, had increased.

The figures also showed that 73% of the new cases were in people aged under 45 and the median age of those newly diagnosed was 29.

HSE Chief Clinical Officer Dr Colm Henry said the rising five-day average "is a worry", adding that "this illness has not gone away".

"What's happened really is ... clearly people are coming together more and not so much frightened of the hospital figures," he told RTÉ's This Week.

Minister for Public Expenditure and Reform Micheal McGrath said it was concerning and disappointing that "progress has stalled" in lowering daily Covid-19 cases.

Speaking on the same programme, he said that it was still too early to say what restrictions may be eased come April.

Mr McGrath said: "Progress has stalled in relation to daily case numbers. People are weary. We know that people are tired, they want to see light at the end of the tunnel. But we must see this through.

"We are dealing with a highly transmissible virus now, and we have to do more than we did previously to get the case numbers down."

Last Thursday, the Chair of the National Public Health Emergency Team's Epidemiological Advisory Group said that while there is "steady progress" in all indicators for the disease, there were some causes for concern.

Professor Philip Nolan said that Ireland was at a "delicate point" in relation to new Covid-19 cases, and that now was not the time for people to relax public health measures.

Meanwhile, a teenage transplant patient who was called for a vaccination but could then not receive it because the vaccine in question - AstraZeneca - was not licensed for under 18s, will now receive the appropriate vaccine on Tuesday.

The Irish Kidney Association has called on scheduling teams to check their lists for age details before inviting people for appointments.