There continues to be "steady progress against all indicators" of Covid-19, Professor Philip Nolan has told a National Public Health Emergency Team media briefing.

"We are still on track for 200 to 400 cases a day by the end of February if we continue to stay home and not mix," according to the Chair of the NPHET Epidemiological Modelling Advisory Group.

It comes as six further Covid-related deaths and 829 new cases of the virus were reported to the Department of Health.

Five of the deaths occurred in February, and one occurred in January. The median age of those who died was 84 years and the age range was 75-95 years.

There has been a total of 3,687 Covid-related deaths in Ireland and a cumulative total of 204,397 infections.

The number of people with coronavirus in ICU is 176 - two fewer than yesterday. There are 1,211 Covid patients in hospitals with 39 additional hospitalisations in the past 24 hours.

The NPHET media briefing heard that the disease is being detected in more young people under the age of 18 since testing of asymptomatic close contacts resumed.

Prof Nolan said resumption of this testing is inflating the case numbers reported over the last four to five days.

This is impacting on daily numbers by between 50 and 100 cases. Over the last 10 days, the proportion of asymptomatic cases has risen again to 20%, where it was before.

He said the numbers in hospital are down 60% from a peak of over 2,000. The number of admissions have declined, down below 60 on average over the last seven days.

Prof Nolan said there continues to be "steady progress against all indicators of the disease".

He urged people not to be disheartened if we remain at a five day average of 900 to 1,000 cases for the next few days because over the coming weeks, "we should see case numbers decline quickly if we keep up our efforts".

Prof Philip Nolan says there continues to be steady progress against all indicators of Covid-19. He says the impact of resumed testing of contacts is being seen, inflating the case numbers over the last few days | https://t.co/Sd3qcF0Pv3 pic.twitter.com/ANP04YRNly

Dr Cillian De Gascun, Director of the National Virus Reference Laboratory, said they were concerned about the variant originating in South Africa.

He said we still need to try and prevent the introduction of that variant into the country. There are 11 cases of the so-called South African variant here - all travel-related and not from community transmission - and none of the variant that first originated in Brazil.

"Variants will continue to emerge. We're focused on three, but it's likely there will be more in the coming months and years," Dr De Gascun told the media briefing.

He said we need to reduce the chance for the virus to replicate and reproduce, because that is when mutations occur.

Dr Cillian De Gascun says they are concerned about data in relation to a variant of the virus first detected in South Africa, because it has additional amino-acid changes compared with another virus variant first found in the UK | https://t.co/Sd3qcF0Pv3 pic.twitter.com/1ZpUGrAjUz

"The vaccines we have now were developed with the original version of the spike protein. What is happening in the South African and Brazilian variant is that the spike protein has now changed.

"We may not necessarily need to go to annual vaccinations," he said. "But it's quite possible we will need to boost our immunity over the coming years as the virus continues to evolve.

"But with the technology that has been developed, the vaccines can be updated in a short period of time." 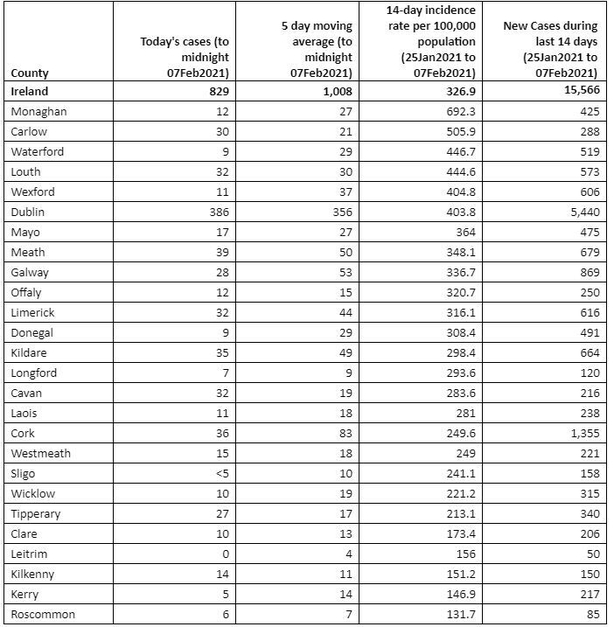 Dr Lucy Jessop, Director of the National Immunisation Office, said the evidence is that there has been a very high uptake of the vaccine among healthcare staff in nursing homes.

Deputy Chief Medical Officer Dr Ronan Glynn said there should be "no question" of healthcare workers taking the vaccine but that they were allowed to have concerns, and these should be addressed.

"I would say to them to talk to their doctor to get more information. We know that people have legitimate concerns around side effects, for example.

"They should not be pressurised but there is ample information from GPs and HSE websites [to inform them]. We do not envisage adopting mandatory vaccines and from what we see to date, it is not required."

Dr Glynn said they anticipate an "avalanche" of data over the coming weeks that will hopefully "reinforce the reasonable premise" that the vaccines will have an impact on transmissibility.

He said it is "too early at this point" to say when people may be able to visit nursing homes.

"But clearly once older people are vaccinated and protected, once healthcare workers are protected and vaccinated, there will be an ability to ease up and more opportunities for interaction.

"I think it's too early at this point to be giving definitive dates around things like that, I don't want to raise false hope."

There were 1,202 deaths in January, of which 451 were associated with outbreaks in nursing homes, Dr Glynn said.

In February so far, there have been 195 deaths, 75 of which were linked to outbreaks in nursing homes.

Dr Glynn said they would prefer that people from different households do not commute to work together, but if they have to, they should do so as safely as possible.

They should be wearing masks in a car and have windows open to allow for good ventilation.

"I understand that it is not possible for everyone to travel to work by themselves. But clearly anywhere where households mix, there's an increased risk across those households," he said.

The Deputy CMO said "our intention would be that we have already passed what is the worst of this disease this year, and we will not have to go back through what we went through in January again".

Dr Glynn said NPHET is monitoring reports that the AstraZeneca vaccine is less effective against the South African variant, "but they are based on very small numbers".

He said it was simply too early to make any definitive conclusions on them yet.

The key issue at the moment is the B117 variant, the so-called UK variant, as it is dominant here "and we have three vaccines that are very effective against that at present".

Deputy Chief Medical Officer Dr Ronan Glynn says they anticipate an "avalanche" of data over the coming weeks that will hopefully "reinforce the reasonable premise" that the vaccines will have an impact on the transmissibility of Covid-19 | https://t.co/Sd3qcF0Pv3 pic.twitter.com/7ZzseKlNcq

Twelve more people have died with Covid-19 in Northern Ireland, taking the official death toll to 1,943. There were 296 new infections, with the cumulative total of positive cases now at 107,163.

Meanwhile, the HSE's Chief Clinical Officer has said there is positive information about the AstraZeneca vaccine "coming in all the time".

Dr Colm Henry said that currently there is a lack of data in the phase three trials and real world experience of the vaccine in older people, and medical and clinical information can only be made on the best available information.

Speaking on RTÉ's Morning Ireland, he said if the advisory from the National Immunisation Advisory Committee changes, then the Health Service Executive will be able to adjust its delivery plans accordingly.

The NIAC has recommended that all authorised vaccines can be used in adults of all ages, including those over 70.

However, it said that mRNA vaccines, such as Pfizer-BioNTech and Moderna, should be used for the over 70s where "practicable and timely".

Dr Henry said there is a guaranteed supply of Pfizer-BioNTech and Moderna vaccines coming into Ireland every week and there will be "easily enough" to vaccinate the over 70s.

Also today, the Government was warned that Covid-19 contingency funds could run out by the middle of the year if restrictions are only eased gradually after 5 March. 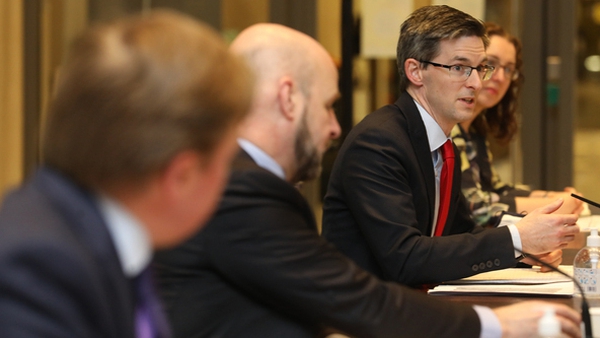 5 key points from the Covid-19 briefing