The Netherlands is to go into its strictest lockdown since the coronavirus pandemic began, with schools and non-essential shops to shut for around five weeks over the Christmas period, Prime Minister Mark Rutte has said.

Protesters could be heard whistling and shouting outside Mr Rutte's office as he said in a televised address to the nation that action was necessary to stem a surge in Covid-19 cases.

"The Netherlands will close for five weeks," Mr Rutte said.

"We're not dealing with a simple flu like the people behind us think," he added, referring to the protesters.

People were advised to stay at home and could have only a maximum of two guests a day, Mr Rutte said, adding that the measures would last until 19 January.

All shops in the Netherlands except essential outlets like supermarkets, food stores and pharmacists must shut from tomorrow, while schools will close from Wednesday, he added.

The Netherlands went into an "intelligent lockdown" in March during which schools shut down but shops stayed open, meaning that the new measures are the toughest since the start of the pandemic. 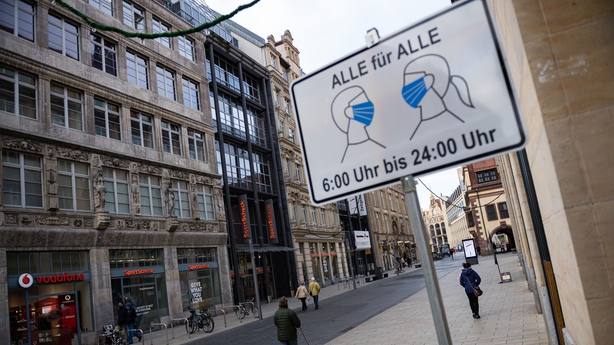 The tighter restrictive measures, which will be effective until 10 January, were in response to an "exponential growth" in the number of COVID-19 cases in Germany, according to a policy paper.

Most retail stores will be closed starting Wednesday, except for those covering daily or holiday needs, such as supermarkets, pharmacies, banks and Christmas tree shops.

Schools and daycare centers will also be closed.

Companies will be asked to take work-from-home solutions.

Private gatherings will be limited to a maximum of five people from two households, excluding children up to the age of 14.

From December 24 to 26, meetings with another four people who go beyond one's own household but from the closest family circle should be permitted.

There will be a nationwide ban on fireworks sales and public outdoor gatherings on New Year's Eve.

Drinking alcoholic beverages in public places will also be prohibited.

On 5 January, Merkel and the state leaders will consult again to decide on measures for the next stage.

Poland faces a real threat of a third wave of the coronavirus pandemic, Health Minister Adam Niedzielski said, adding he would recommend that current restrictions continue until at least 17 January.

The government is expected to adopt a national coronavirus vaccine plan tomorrow.