There have been calls for the Government to review the ban on live music and dancing at weddings as part of the current Level 3 Covid-19 measures.

Under the revised reopening guidelines issued by Fáilte Ireland, in line with the Government's public health advice and protocol, up to 25 guests can attend a wedding ceremony and reception.

The reception must be a sit-down meal only and live music and dancing is not permitted.

Live music and dancing was allowed during the previous Level 3 restrictions.

Cathal Molloy, founder of the Wedding Band Association, says the new restriction "is having a really, really hard impact on couples and the bands" and he is appealing to the Government to reconsider the move.

He says the WBA already has its own guidelines in place, which have been updated, and all members have completed Covid-19 officer training courses. 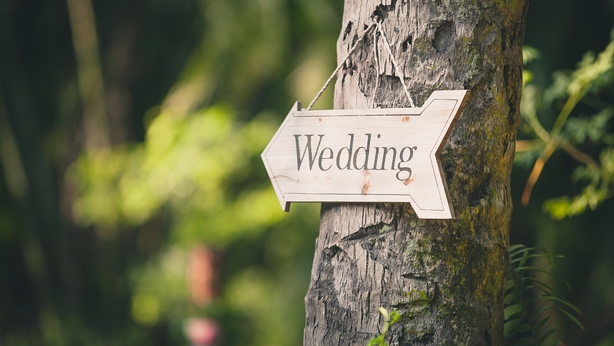 Mr Molloy, who is also a musician, says "since this measure was put in place, you can see the reaction from the couples, so the music is an integral part of the day."

He says "couples are devastated" and all of the Association's members have "taken a huge financial hit" with many bookings cancelled.

He says the bands are conscious of the public health advice, "so we just want to try a common sense approach to allow live music at weddings."

She says she has been "talking to couples who've postponed their weddings twice and three times in some instances this year and scaled back their weddings."

Ms O'Reilly says the couples have described the restriction on live music and dancing as "mean-spirited."

The Minister for Further and Higher Education Simon Harris says "the virus doesn't know which event the music is at, so the risk would be the same regardless of the event."

He says the "the Government always keeps all of its plans under review. We listen very carefully to Dr Tony Holohan and to NPHET and of course any proposals can be considered by our public health experts."

However, Mr Harris is appealing to people to stick with the public health guidelines.

He says "we have come so far in this country in relation to our battle against Covid-19."

"My message to people really would be to hold firm, difficult and all as it is, with the public health advice, because we could be approaching at the start of 2021, the beginning of the end of what has been the most horrific time for people."