The measures will apply to France's borders with Switzerland and Spain, where it is expected ski slopes will be open during the festive season.

"The goal is to avoid French citizens getting contaminated.

"That will be done by installing random checks at the borders," Mr Castex told BFM TV.

He reiterated France's decision to keep its ski lifts closed at Christmas.

Germany and Italy share France's position but with Austria, as well as Spain and Switzerland, leaning towards opening its ski resorts, the topic has become divisive in Europe.

Although Mr Castex hinted there was still room for a agreement.

"We'll put in place ... a quarantine, meaning we will proceed with random checks at the borders and the possibility for authorities to order a seven-day quarantine", the French Prime minister said.

"But diplomacy is still in play, the die has not been completely cast (on a European ski agreement)", Mr Castex added.

During the first wave of infections last season, some ski centres became breeding grounds for the coronavirus, accelerating its spread across Europe. 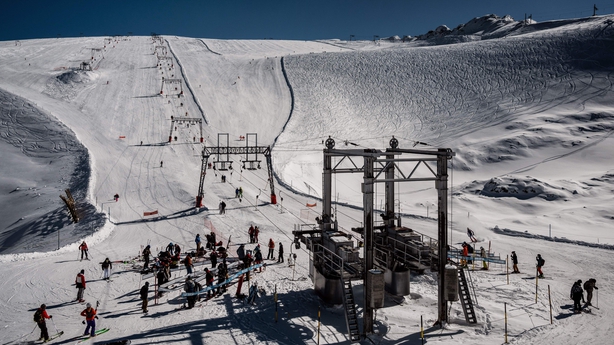 Downhill skiing is effectively banned in France for the season to help contain the spread of Covid-19 after the government said last week that ski lifts would remain closed until January, even though resorts could otherwise operate.

Slopes are open in neighbouring Switzerland, tempting French winter sports lovers to cross the border from 15 December, when the current partial lockdown is lifted.

"If there are countries that keep their resorts open, there will be controls to dissuade the French," President Emmanuel Macron told a news conference yesterday.

This was to avoid "creating a situation in which there is an imbalance with stations in France", he said.

Germany and France have called for an EU-wide ban on skiing over Christmas, against strong opposition from Austria, which will allow skiing from 24 December. Italy and Spain have yet to decide.

Switzerland - not an EU member, though it has strong ties to the bloc - has ignored calls to fall into line, much to the frustration of French officials.

France's ski resorts have been up in arms over the ban, saying the weeks around Christmas and New Year are crucial for their survival since they account for up to a quarter of their annual revenues.

France's winter sport sector says it generates some €11bn in revenue per year and employs 120,000 people during the season.