A new Covid-19 vaccine from pharmaceutical giant Pfizer, working with German biotech company BioNTech, has been approved for use in the UK.

Analysis shows the vaccine can prevent 95% of people from getting Covid-19, including 94% in older age groups.

The vaccine has been tested on 43,500 people in six countries and no safety concerns were raised.

Approval means the UK can begin rolling out the vaccine to those most in need, including frontline NHS workers.

What type of vaccine is this?

The jab is known as a messenger RNA (mRNA) vaccine.

Conventional vaccines are produced using weakened forms of the virus, but mRNAs use only the virus's genetic code.

An mRNA vaccine is injected into the body where it enters cells and tells them to create antigens.

These antigens are recognised by the immune system and prepare it to fight coronavirus. 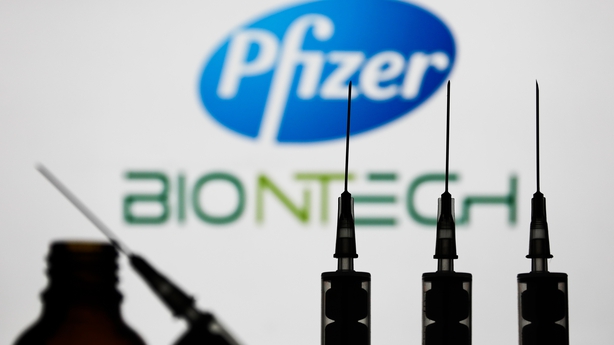 What are the advantages of this type of vaccine?

No actual virus is needed to create an mRNA vaccine. This means the rate at which it can be produced is dramatically accelerated.

As a result, mRNA vaccines have been hailed as potentially offering a rapid solution to new outbreaks of infectious diseases.

In theory, they can also be modified reasonably quickly if, for example, a virus develops mutations and begins to change.

mRNA vaccines are also cheaper to produce than traditional vaccines, although both will play an important role in tackling Covid-19.

One downside to mRNA vaccines is that they need to be stored at ultra-cold temperatures and cannot be transported easily.

All vaccines undergo rigorous testing and have oversight from experienced regulators.

Some believe mRNA vaccines are safer for the patient as they do not rely on any element of the virus being injected into the body.

mRNA vaccines have been tried and tested in the lab and on animals before moving to human studies.

The human trials of mRNA vaccines, involving tens of thousands of people worldwide, have been going on since early 2020 to show whether they are safe and effective.

Pfizer will continue to collect safety and long-term outcomes data from participants for two years.

How is it shipped and stored?

The vaccine is to be shipped in special storage containers which will keep it at ultra-low temperatures until it is ready to be administered.

Special GPS trackers will mean that the temperature of the vaccine can be remotely monitored to ensure it stays at the correct heat to keep it effective.

Details of how the vaccine could be transported and stored emerged following concerns that health services may face difficulties handling a vaccine which needs to be stored at -70C.

Pfizer has designed a suitcase-sized container that will keep the doses at -70C for up to ten days using dry ice.

Each of the containers, dubbed "shippers", holds around 1,000 doses and will be fitted with thermal sensors to enable the pharmaceutical giant to track the location and temperature of the frozen vaccine vials.

The thermal shipping systems can be recharged with dry ice if needed, Pfizer said. Vaccines will be shipped by air and road, but not boat due to the time constraints.

Once the vaccine has been transported it can be stored in a fridge for up to five days at 2-8C, which is entirely feasible in a standard medicine fridge at a GP practice.

How many doses does the UK have?

The UK has secured 40 million doses of the Pfizer/BioNTech vaccine, with 10 million due in the UK by the end of the year.

Patients need two doses, between 21 and 28 days apart, meaning not enough shots have been secured for the entire UK population.

However, it is likely other vaccines, including one from Oxford University, will be approved in the coming weeks and months.

Will it be available in Northern Ireland?

As Britain is no longer part of the EU, it did not have to wait for the European Medicines Agency to give approval and it could go it alone.

The EMA said that its longer approval process for Covid-19 vaccines is safer.

Ireland is part of the EMA and will see the start of a vaccination programme once approval is granted by the European body.

The European Commission has announced plans to buy 300m doses of the vaccine for EU member states.

It is one of four deals made by the commission that could benefit Ireland.

The Department of Health said that Ireland would be allocated 1.1% of the European portfolio of vaccines.

On this basis, Ireland could receive 3.3m doses of the Pfizer/BioNTech vaccine.

That would be enough to vaccinate up to 1.6m people, as the vaccine requires two doses.