Two Irish scientists, who were involved in the development of a coronavirus vaccine at Oxford University, have said the results from phase 3 of the trials are "fantastic" and "promising".

British drugs group AstraZeneca and the University of Oxford have said their jointly-developed vaccine against Covid-19 has shown "an average efficacy of 70%" in trials.

Speaking on RTÉ's Today with Claire Byrne, Professor Teresa Lambe said they have taken monetary risks, but not safety risks, which is why they have been able to go so far, so fast.

She said a normal vaccine programme can take ten years to develop - a vaccine has firstly to be designed, then there is pre-clinical testing and if a good read-out is achieved, a GMP (good manufacturing practice) batch is manufactured, which can be administered to humans.

However, she said, "what we did, was we designed the vaccine and we started to try and get funds to allow us to make the GMP batch straight away, so the risk has been monetary and that's why we've been able to go so far, so fast".

Prof Lambe said while initial results show the vaccine is 70% effective, it can be as high as 90% efficacy if they change the dosing regime.

She said the first dose is half the standard dose, and is followed up with a standard dose and "that pushes the efficacy up".

Prof Lambe said it is very important to get as many vaccines out there, as one vaccine will not cover the entire world.

She said that the team has been working on this since 10 January and no-one who got this vaccine was hospitalised.

They will continue trials for the next six months to a year, she said, to see the long-term health impact of the vaccine, but "everything so far is very promising" and they have had no safety concerns that they are worried out.

Prof Lambe said the flu vaccination regime, which she said prevents disease and has a very positive impact on health outcomes, has an efficacy rate of between 40-60%, "so having a vaccine that is above 50% efficacy is really promising".

She said this vaccine can be stored at fridge temperature, and along with AstraZeneca and other partners, they are committed to getting as many vaccine doses as they can, up to 3 billion next year.

The Oxford Covid-19 vaccine trial is being run by the Jenner Institute and Oxford Vaccine Group.

Prof Hill said the vaccine could be approved before Christmas with the first vaccinations also in December.

Speaking on RTÉ's News at One, Prof Hill said there are ten countries manufacturing the vaccine for production; one based in India has already made 100 million doses and plans to have 200m produced by the end of the year.

He said that along with the headline results from phase three trials reporting 70% efficacy rate, another group, which was immunised in a different way reported a 90% efficacy rate, which he said is "fantastic".

Prof Hill said that the vaccine seems to be particularly effective in preventing serious disease and also works on "silent" or asymptomatic infection, which would help to reduce transmission to other people. 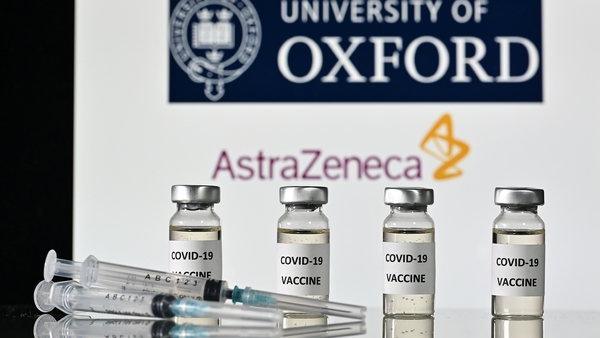