Roughly half of England is now under tougher coronavirus restrictions, after the government announced more stringent measures for London and seven other areas to try to cut surging numbers of cases.

But as ministers tightened the screw on social interaction to cut close-contact transmission, they sparked a furious row with leaders in northwest England, where infection rates are highest.

Talks broke down over the level of financial support available for people and businesses affected by plans for even tougher action.

Greater Manchester Mayor Andy Burnham accused the government of being "willing to sacrifice jobs and businesses here to try and save them elsewhere".

"Greater Manchester, the Liverpool City Region and Lancashire are being set up as the canaries in the coalmine for an experimental regional lockdown strategy," he told reporters.

"Jobs, lives, businesses are at stake... (but) the package is just not good enough."

Tighter restrictions that come into force in the eight new areas on Saturday ban households mixing indoors, limit groups meeting outside to six, and advise against non-essential travel.

Some nine million residents will be affected in London, and more than two million others in parts of the southeast, the midlands, north, and northwest.

But taking into account swathes of mainly northern England already under restrictions, the total rises to just over 28 million, more than half of England's 56 million people.

Large parts of Scotland and Wales and the whole of Northern Ireland are also subject to restrictions, including closures of pubs and other hospitality venues.

Instead, he favours a targeted, local three-tier alert system based on infection rates, which are not evenly spread across the country. 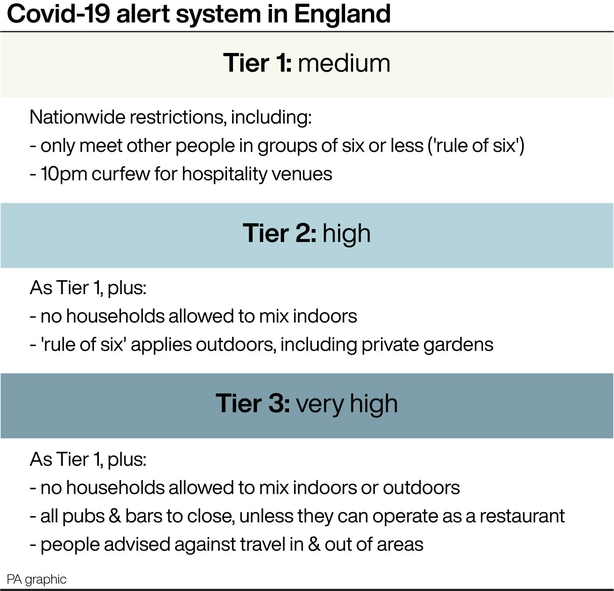 The announcement means London, Essex and Elmbridge in southeast England are now at the "high" level two of the tiered system.

Also on the list are northeast Derbyshire, Chesterfield and Erewash in east central England; Barrow-in-Furness, in the northwest; and the northern city of York.

Liverpool, in northwest England, is the only area in the "very high" level three category. Manchester and several other areas had been expected to join them until talks failed.

Britain is tracking its European neighbours with a second wave of infection, but Mr Johnson has so far resisted imposing another national lockdown. 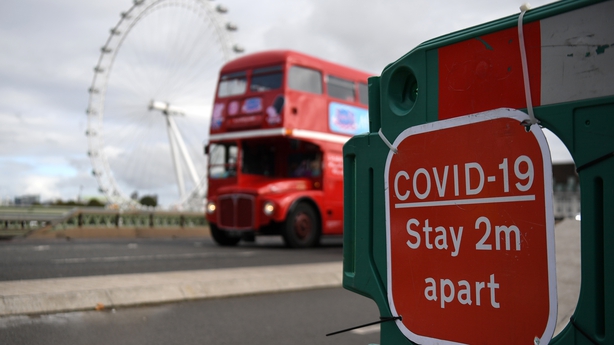 The three-month stay-at-home restrictions, imposed in late March and lifted in June, battered the economy, and businesses fear a repeat could further hit revenues and jobs.

London Mayor Sadiq Khan said there were "no good options" faced with rising cases, hospital admissions and deaths from the virus.

But he said there was "little choice" given persistent issues with the government's contact tracing scheme for people who have tested positive. 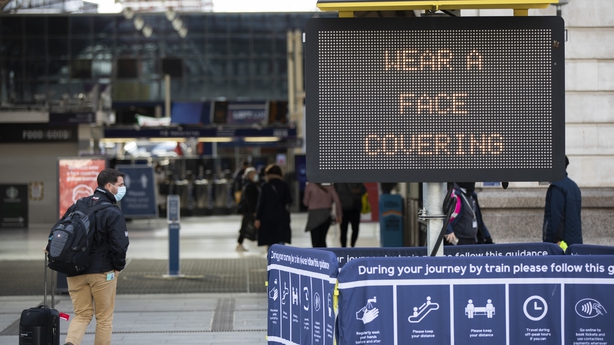 There has been sustained concern about the impact of the outbreak on the hospitality industry, highlighted by the announcement by the Marstons pub chain of 2,100 job losses.

The British Beer and Pubs Association, an industry body, said existing curbs such as a 10pm curfew and six-person limits had already hit revenues.

The step "completely kills our pubs' business model" even as extra financial assistance only kicks in at tier three, she added.

Mr Johnson was criticised earlier this week for ignoring scientific advice for a short lockdown in favour of a targeted local approach.

His chief medical officer has also cast doubt on whether the tier system will be effective.