The Chief Medical Officer has said that he is "deeply concerned" at the spread of Covid-19 since NPHET last met last Sunday.

It comes as the Department of Health was notified of five further coronavirus-related deaths and an additional 611 cases.

It brings the total number of Covid-19-related deaths in Ireland to 1,816. The number of confirmed cases now stands at 39,584.

Speaking at his first Department of Health press briefing since returning from a period of leave, Dr Tony Holohan said there had been "further deterioration" in "key indicators that were considered by NPHET on Sunday".

"We are deeply concerned about the changing path of this infection," he said.

He also said that NPHET's findings and recommendations on Sunday required "early, serious and confidential discussion", adding that that "didn't happen".

In a statement, the National Public Health Emergency Team said of the new cases identified 303 are men and 305 are women, while 59% are under the age of 45.

It said 50% of the new cases are associated with outbreaks or are close contacts of a confirmed case. NPHET says that 83 cases have been identified as community transmission.

Deputy Chief Medical Officer Dr Ronan Glynn says there has been an increase in the number of people in hospital with the virus. 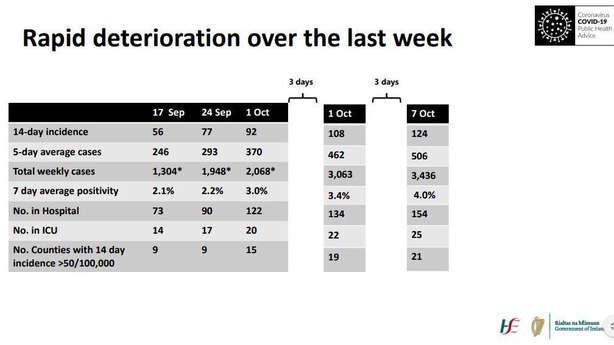 "Trends in case numbers and incidence are now being reflected in indicators of disease severity," he said.

"The number of people in hospital has increased from 122 last Thursday to 156 this afternoon. There are currently 25 people in critical care compared to 20 one week ago."

Dr Glynn told the briefing that 21 counties now have a 14-day incidence rate of more than 50, while Donegal remains the highest at 312.

He said that over the last two weeks, there have been 5,925 new cases, and that the median age is 33. 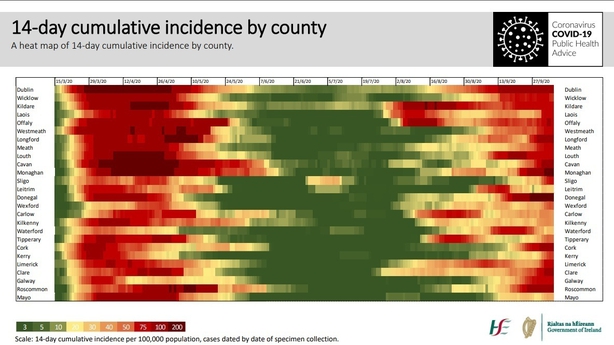 In the last two weeks, there have been 397 confirmed Covid-19 cases among health care workers.

Dr Glynn told the briefing that there has been an increase in mortality.

He said that in all of August and September, there were four and 34 deaths respectively. However, in the first six days of October, an additional eight deaths have already been notified, with five deaths being reported today, all of whom have passed away this month.

There is also an increase in the number of outbreaks in nursing home settings.

Dr Glynn said there are at least six outbreaks so far in October and at least five open clusters with more than 20 cases in nursing home residents.

Meanwhile, the Chair of the NPHET Irish Epidemiological Modelling Advisory Group said that case numbers and hospitalisations are "growing exponentially".

Prof Philip Nolan said: "The Reproductive number is now estimated at 1.2. If we fail to reduce viral transmission nationwide immediately, we could see 1,100-1,500 cases per day and 300-450 people in hospital by November 7th."

Professor Philip Nolan has said we are looking at a 'rapidly deteriorating' and position. He says unless there is a 'very significant reduction' in transmission in the coming weeks we will see hospitalisations that are a significant challenge | Read more: https://t.co/WnivLouha8 pic.twitter.com/ZkioeD5lIH

Speaking at the press briefing, he said that we are in a "rapidly deteriorating" and "very precarious" position as we are now in a "phase of exponential growth".

Professor Nolan said that the "bottom line" now is that unless there is a "very, very significant reduction" in the transmission of the virus, we will see "case numbers and hospitalisations that will be a very significant challenge for us as a society".

He said they are now urging people to radically restrict their social contacts to stop the spread of the virus.

"If this doesn't happen, we will see cases growing exponentially," he added.

Professor Nolan said that he virus is growing at a rate of 4% per day, and if it continues at this rate we could be seeing around 1,300 cases per day by the end of the first week of November. 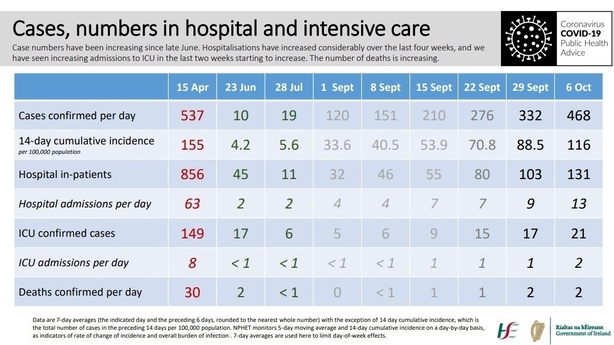 There is no county where the incidence of the virus is not of concern and that the "best estimate" for the reproductive number is 1.2 for the entire country, the professor said.

However, he warned that "frankly the situation is worse than that" because the estimate is biased by the fact that Dublin cases have not been growing as fast as they have been.

"So it's likely the R number is less than 1.2 and closer to 1 in Dublin, but for the rest of the country it's significantly higher at 1.5," he said.

Prof Nolan said that a model from three weeks ago predicted 590 cases by 7 October, and that today we report 611.

In the coming weeks, he said if the R number is 1.8 cases will "take off".

However, he said if the reproductive number is between 1.2 and 1.4 then we can expect to see between 1,100 and 1,500 cases per day by the end of the first week in November.

"Case numbers will double every 18 days if nothing changes," he stated.

He warned that we cannot protect older people aged over 65, "nor can they protect themselves", if the level of disease in the wider community continues to rise. 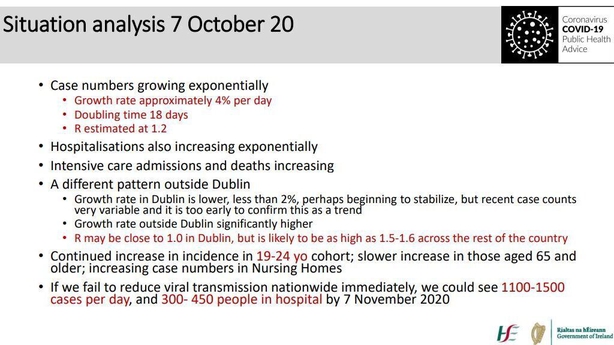 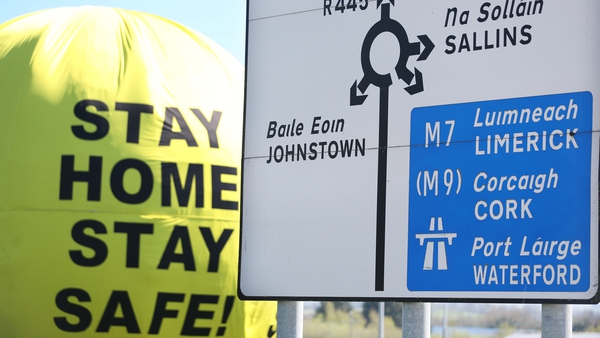