A Covid-19 briefing at the Department of Health has heard how the virus spread over the course of a weekend, resulting in 30 new confirmed cases.

Dr Breda Smyth, Director of Public Health with HSE West, said that the outbreak emanated from one index case over a weekend of socialising. 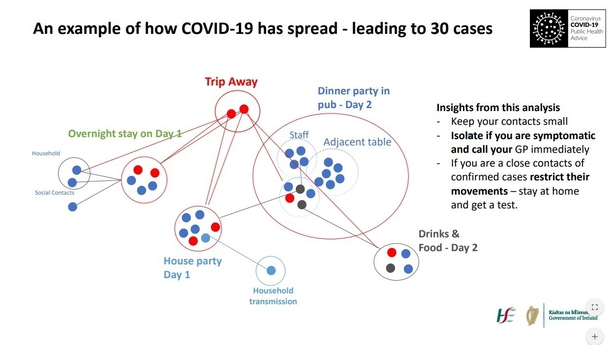 She said that a couple went on a trip away and when they arrived back on day one of the weekend, they attended a house party, which had eight people at it.

Out of this number, six people became positive with the virus.

Dr Smyth said that the couple stayed overnight with a family and in this household, three out of the four members of the household became positive for the virus.

On the second day of the weekend, one of the couple went with another group of friends for a dinner party into the town centre. At that party, there were four people and all four test positive for the virus.

The conference heard that at the premises where the dinner party was, a table adjacent to the party had six people, all of whom became positive for the virus.

Four members of staff at the bar/restaurant also tested positive for Covid-19.

The index case with another friend then went to another drinks venue to meet a party of four for drinks, and all four became positive.

Appealing to people to reduce their social contacts, Dr Breda Smyth, Director of Public Health with HSE West, says that 30 people tested positive for Covid-19 emanating from one index case over a weekend of socialising | Read more: https://t.co/jjRDjfUDro pic.twitter.com/F29j60NFUd

Dr Smyth said that the virus is "very unpredictable", the guidelines had been followed in the bar/restaurant but they reviewed the situation with the premises and tables have been rearranged.

Numbers have also been reduced in that part of the restaurant.

"This demonstrates that over two days in a weekend, how quickly the virus can spread and the importance to restrict your social interactions," Dr Smyth said.

"If you were to halve your social interactions and go out one night at the weekend – that would help greatly."

She also urged young people to meet up in small groups and to download the Covid app to help in contact tracing.