Brazil has surpassed 100,000 coronavirus-related deaths and three million cases of infection, crossing the grim milestone after President Jair Bolsonaro said he had a "clear conscience" on his response to the outbreak.

With 100,477 fatalities and 3,012,412 confirmed cases, the South American nation of 212 million people is the second hardest-hit country in the global pandemic, after the United States.

However the official figures are most likely an undercount, with experts estimating that the total number of infections could be up to six times higher due to insufficient testing.

Senate speaker Davi Alcolumbre announced four days of mourning in Congress to pay tribute to the country's 100,000-plus virus victims.

The coronavirus outbreak in Brazil is showing no sign of slowing as it enters its sixth month.

The country's first confirmed Covid-19 case was identified in Sao Paulo on 26 February, with the first death on 12 March, also in the city.

Brazil marked 50,000 deaths a hundred days later, but then doubled that total in just half the time.

Infections have accelerated in recent weeks in the countryside as well as inland regions and areas where the virus was late arriving, particularly the country's south and centre-west.

In southeastern states such as Sao Paulo and Rio de Janeiro, hardest-hit by the virus in absolute numbers, the situation has stabilised, while the virus' presence has declined in northern regions after reaching catastrophic levels in April and May.

At Copacabana beach in Rio, activists from the NGO Rio de Paz released 1,000 red balloons yesterday while standing between 100 black crosses stuck in the sand, in a tribute to Brazilians who have died of the virus. 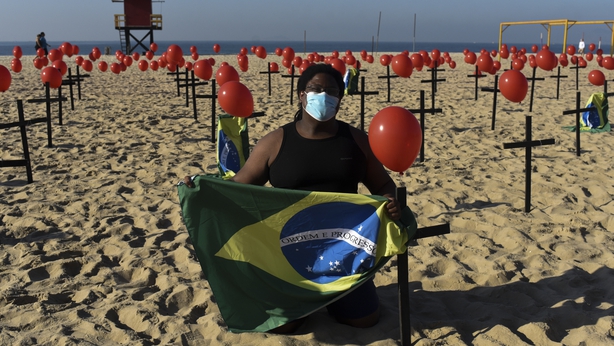 Former president Luiz Inacio Lula da Silva on Twitter denounced "the arrogance of a president who has chosen to describe this cruel virus as a little flu, defying science and even death, and who bears in his soul the responsibility for all the lives lost."

The contagion has cast a harsh light on Brazil's inequalities, with the virus wreaking particular havoc on the country's favelas.

The country's indigenous Amazon populations have also been hard hit, with one of Brazil's leading chiefs, 71-year-old Aritana Yawalapiti, dying on Wednesday of respiratory complications caused by Covid-19.

Mr Bolsonaro's government, which has been criticized for managing the epidemic in a chaotic fashion, is on its third health minister since the virus reached the country.

The right-wing leader, who tested positive for the virus last month but has since recovered, said on Thursday he had "a clear conscience" and had done "everything possible to save lives."

Mr Bolsonaro also called the governors of states that took containment measures which he opposed for economic reasons "dictators."

Australia's second-most populous state, Victoria, has reported its deadliest day of the Covid-19 outbreak with 17 people dying, as police thwarted a planned anti-mask rally in the state capital of Melbourne.

Victoria, at the centre of a second wave of infections in Australia, reported 394 cases of the virus in the past 24 hours, compared with a daily average of 400-500 over the past week.

The new deaths bring the state's total to 210.

The southeastern state, with infections concentrated in Melbourne, accounts for a lion's share of the national tally of more than 21,000 and 295 deaths.

In an effort to slow the spread of the virus Victoria has imposed a night curfew, tightened restrictions on people's daily movements, and ordered large parts of the economy to close.

Those measures have helped, although the situation remains challenging, as cases with unknown sources of infection continue to increase, said Victoria Premier Daniel Andrews.