US President Donald Trump's much heralded new tone on the coronavirus pandemic evaporated in a burst of misleading medical speculation, criticism for his own top virus expert, and praise for an eccentric preacher-doctor touting conspiracy theories.

Just a week ago, Mr Trump sought to get his shaky reelection campaign back on track by addressing national criticism of a leadership void in a crisis that has already killed nearly 150,000 Americans and wreaked havoc on the world's biggest economy.

The president admitted things were going to "get worse before they get better". He indicated he was embracing the science. He finally urged the wearing of masks.

But at a press conference in the White House last night, it was the old Trump in full.

He said it was unfair that the leading US infectious diseases specialist Anthony Fauci was more popular than him.

"Nobody likes me", he said.

He pushed his pet theory - counter to advice from his own government and most doctors - that the anti-malarial drug hydroxychloroquine can be used to treat Covid-19 patients.

"Many doctors think it's extremely successful".

And he took pains to praise Stella Immanuel, a doctor and preacher who believes in witchcraft and a plot being carried out to vaccinate people against being religious, calling her "spectacular".

Mr Trump's testy press conference, which he ended while answering a second question about his praise for Dr Immanuel, followed an overnight row with social media giants Twitter and Facebook over some of the same controversies. 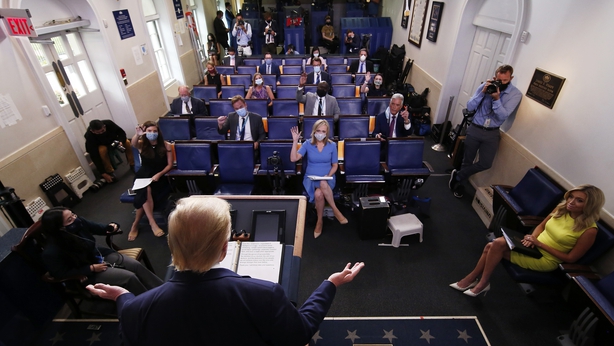 Twitter took the rare step of removing clips tweeted by Mr Trump from a video earlier deleted by Facebook in which Dr Immanuel and a group of doctors told Americans that masks are unnecessary and that hydroxychloroquine can defeat Covid-19.

Twitter said that tweeting the video, which was seen by millions of people online and remained up on different right-wing websites, was "in violation of our Covid-19 misinformation policy".

So disgusting to watch Twitter's so-called "Trending", where sooo many trends are about me, and never a good one. They look for anything they can find, make it as bad as possible, and blow it up, trying to make it trend. Really ridiculous, illegal, and, of course, very unfair!

Twitter also blocked Mr Trump's son Don Jr from tweeting for 12 hours after he uploaded a version of the video.

Dr Immanuel, who calls herself "God's battle axe", claims in the video that "the virus has a cure" in hydroxychloroquine.

This is false as there is currently no cure for the coronavirus.

Also, a majority of medical authorities now have decided, after some initial debate, that hydroxychloroquine has no proven benefit for coronavirus patients and can be very harmful.

Mr Trump has for months pushed the notion of hydroxychloroquine and says he took the drug for two weeks as a precaution, without suffering ill consequences.

The tweet, shared by Mr Trump to his 84 million followers, claimed that Dr Immanuel is highlighting "what should be the biggest scandal in modern American history".

This was "the suppression of #Hydroxychloroquine by Fauci & the Democrats to perpetuate Covid deaths to hurt Trump," the tweet reads.

Mr Trump also attacked Dr Fauci by retweeting a comment on a podcast hosted by his former advisor Steve Bannon that Dr Fauci "misled the American public on many issues".

Dr Fauci responded on ABC News saying he ignores Twitter. "I don't tweet, I don't even read them," he said.

"I have not been misleading the American public under any circumstances," said Dr Fauci, whose decades of experience include pioneering the fight against AIDS from the 1980s onward.

"We're in the middle of a crisis with regard to a pandemic," he said. "This is what I've been trained for my entire professional life".

Mr Trump insisted at the press conference that he has "a very good relationship with Dr Fauci".

Mr Trump's Twitter activity on Monday was made more remarkable by the fact that hours earlier he had flown to a North Carolina laboratory participating in the race for a coronavirus vaccine.

Mr Trump was shown inspecting high-tech lab equipment at Fujifilm Diosynth Biotechnologies in Morrisville and reiterated his support for the scientific response to the pandemic.

"We will achieve a victory over the virus by unleashing American scientific genius," he told reporters.

The facility has been awarded a contract to mass produce an experimental vaccine developed by Novavax, as part of a multi-billion dollar government initiative dubbed Operation Warp Speed.