The Chief Executive of the Health Service Executive has said one metre social distancing would give the health service greater capacity, but it will be guided by the National Public Health Emergency Team's advice.

Paul Reid said NPHET guidance is for two-metre social distancing and that is what the HSE is planning in terms of framework for new services to work through.

He said this does have implications in terms of capacity in emergency departments, outpatient clinics and waiting rooms for example.

At a briefing this morning, he said there is "no doubt" one-metre distancing would give significant extra capacity in managing services, but the executive will be guided by the current NPHET guidance.

Chief Clinical Officer for the HSE Dr Colm Henry said on 27 March we were facing the "spectre of uncontrolled community transmission" of the virus, but the stringent measures introduced, including the two-metre social distance rule, have allowed us to bring the 'R' figure (effective reproduction) down to 0.5.

He said that bearing in mind this is a droplet spread illness, the guidance was based on the projected length a droplet can spread.

He said initially we thought the virus was spread primarily through coughing and sneezing, but as we learn more about it, we are more aware of how less obviously it can spread from people who are asymptomatic or pre-symptomatic.

On the implications if social distancing was reduced from 2m to 1m, HSE chief @paulreiddublin says "There's no doubt 1m would certainly give us significant extra capacity [for managing services] but we’ll be guided by what the current guidance is from Government through NPHET". pic.twitter.com/U06aOF9mmI

Meanwhile, Labour leader Alan Kelly has called on Minister for Health Simon Harris to carry out an audit on the impact of changing the social distancing rules to one metre would have on the health service.

In a statement, he said there was now a clear divergence between the World Health Organization and the Government.

An expert in infectious disease at the Royal College of Surgeons Ireland said the two-metre social distancing rule is likely to remain in place, as it is the best advice from the European Centre for Disease Control. 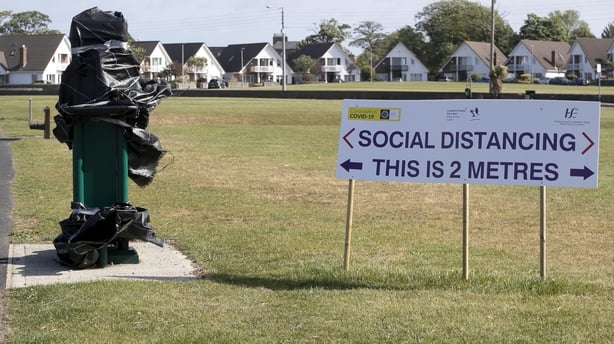 Speaking on RTÉ's This Week, Professor Sam McConkey said the distance between people is one of a number of key measures taken to reduce the spread of the virus.

He said that the Irish authorities are following the ECDC advice, which is specific to European countries and that there is "a lot of wisdom in pooling our knowledge across countries".

He said World Health Organization advice, which calls for a one-metre minimum, is based on a global picture.

Prof McConkey said that until there is zero emergence of cases that are unexplained in the community, restrictions, including social distancing, would continue.

He said we have fewer and fewer deaths and cases each day and most of these are in "known chains of transmissions" such as in meat factories or households.

He said there are a range of other measures that could be changed to make the restrictions easier on people, such as re-opening schools and creches.

He also said a scheme in New Zealand whereby a number of groups or families can form a mini-bubble or cocoon and socialise together, while remaining apart from others could be considered.

He said this would allow both children and parents in those groups to interact and allow a merging of family groups.

On the same programme, the Restaurants Association of Ireland called for the Government to explain why it has "changed" in moving away from WHO advice on social distancing guidelines.

RAI CEO Adrian Cummins said with 34 days to go until they re-open, restaurant owners want guidelines on social distancing to be reissued. 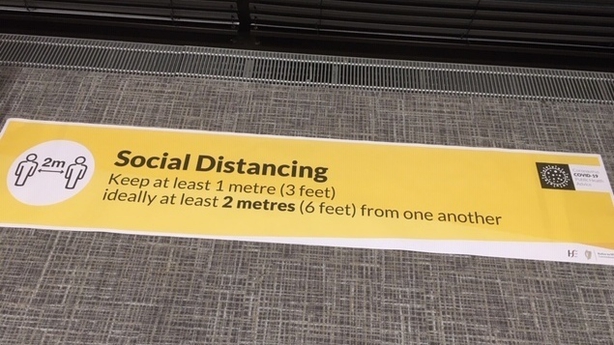 He said the difference between one and two metres of social distance would see many restaurants unable to reopen as they could only operate at 20-25% per cent capacity and would be loss making.

Mr Cummins said "we went into the crisis along WHO guidelines and somewhere along the journey we have changed to Irish guidelines".

He said countries including Austria, Finland and Norway have moved to a one-metre rule and "if we don't have this conversation" there will be thousands of jobs at risk.

David Fitzsimons from Retail Excellence Ireland said the social distancing guidelines are "inferior to every other country" and his sector is concerned that it will make retail operations difficult once "pent-up demand" is seen on shop floors.

The Health Service Executive has said a framework will be finalised in the coming weeks to see how to safely resume non-Covid healthcare services in the current environment.

Mr Reid said there are more than 900 vacant beds in hospitals, down from 2,500, which shows an increase in non-Covid activity.

There are 51 people in ICU being treated for Covid-19, which is down 68% from the peak in early April.

He said the speed of testing has increased with 98% of tests returning with a negative result and results are returning in less than two days.

Mr Reid said mass testing of nursing homes in now complete and is nearing completion in mental disability settings and the automatic testing of close contacts of confirmed cases is also under way.

The briefing was told that the HSE planned to carry out antibody testing in June to try to measure the level of the disease in the population.

It was expected most people who had the disease would develop an antibody response, which would provide some level of protection but results in other countries had shown low levels in communities.

He said a report into the Mater Hospital has concluded and found it did meet all its obligations on reporting of cases and all testing and tracing was completed properly.

The report makes recommendations about the validation of data and assurances have been given by all hospitals about correct uploading of data.

She said a total of 20,177 people attended emergency departments last week, up 2% attendance on last week but still lower than this time last year.

She said there is now 90% occupancy in acute hospitals and there were 409 delayed discharges of patients to nursing homes.

She said Covid-19 is not going to disappear so we need to ensure we have capacity at our hospitals.

She added that the community assessment hubs are being looked at to see how quieter hubs can best be used to support services.

The HSE's clinical advisor to the National Office for Suicide Prevention said the Covid-19 pandemic will see new groups of people having mental health challenges for the first time and he urged anyone feeling vulnerable to seek help.

Dr Philip Dodd, a consultant psychiatrist and clinical professor at UCD, said that people who are cocooning or those who are worried about their jobs or health may need some extra psychological supports.

He said the majority of the population can and will adjust to the new Covid-19 environment and
clinical research shows that people are becoming less worried and settling after the initial arrival of the virus in Ireland.

He said mental health services are still accessible despite being interrupted by Covid-19 demands and there are new tele-health options such as online, text and phone supports that have been used by many people for the first time.

Anyone with new concerns about their mental health is urged to contact their GP or in an emergency to attend their lcoal emergency departments.

There are details of mental health services on yourmentalhealth.ie or freephone 180111888.