British Prime Minister Boris Johnson has returned to Downing Street to take charge of the UK Government's response to the coronavirus outbreak.

Mr Johnson arrived at No 10 this evening three weeks after he was hospitalised with the disease.

He returned to a growing chorus of calls from senior Tories to begin easing the country's shutdown amid mounting dismay at the damage it was causing to the economy.

Earlier, British Foreign Secretary Dominic Raab insisted there could be no immediate relaxation, saying the outbreak was still at a "delicate and dangerous" stage.

Mr Johnson - who has spent the past fortnight recuperating at his official country residence at Chequers - is expected to chair the meeting of the Government's Covid-19 "war cabinet" tomorrow morning.

He prepared for his return with a "summit" on Friday with Mr Raab, who has been deputising for him, Chancellor Rishi Sunak and senior aides.

Mr Raab said the Government would proceed "cautiously" in order to avoid a second peak in the outbreak.

"We are at a delicate and dangerous stage," he told Sky News's Sophy Ridge on Sunday programme. 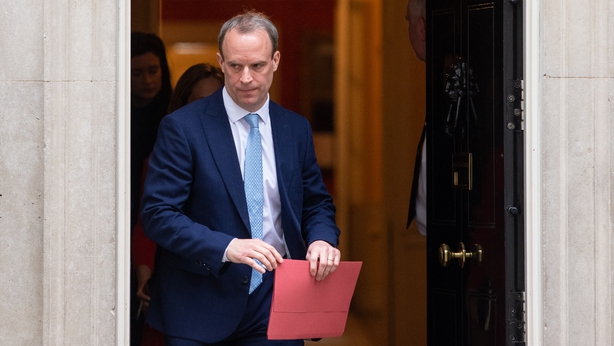 "We need to make sure that the next steps are sure-footed, which is why we are proceeding very cautiously and we are sticking to the scientific advice."

He was backed by the NHS England medical director Professor Stephen Powis, who said while the number of patients in hospital with the disease was continuing to fall, it could easily pick back up if the restrictions were relaxed.

"My fear is that those curves won't continue to be on a downward trend, but will start to go on an upward trend. We are not at a point where any of us can be absolutely confident that that's not going to be the case," he told the daily No 10 news conference.

"We need to remind ourselves that this has been a really tough four weeks and we don't want to lose the benefits that have come from this. We need to keep going."

His warning came at the end of a weekend which saw the coronavirus death toll in hospitals pass the 20,000 mark - with fears that many more have died in care homes, hospices or in the community.

According the latest official figures, a total of 20,732 patients had died in hospital after testing positive for coronavirus in the UK as of 5pm on Saturday, up by 413 from the day before.

Mr Raab said that while the Government had been doing its "homework" in readiness for the time when restrictions could be eased, he said they would have to remain for "some time" to come.

"We won't just have this binary easing up of measures. We will end up moving to a new normal," he told BBC1's The Andrew Marr Show.

He said it was "inconceivable" schools could re-open without measures in place to stop the spread of the disease, but said ministers were looking to ease restrictions on outdoor activities.

"We do want to look - when it is safe, when it is responsible - at ways to allow more outdoor activities to take place, but again we have got to have the evidence that that is a sure-footed step - doesn't allow coronavirus to get a grip back on the country."

He said officials were also looking at possible sea and airport checks, with passengers arriving in the UK required to quarantine for 14 days.

It is believed that it could form part of the Government's "test, track and trace" policy to isolate new cases of the disease, further curbing its spread, as the numbers come down.

Meanwhile, Scottish First Minister Nicola Sturgeon warned she could delay any lifting of the restrictions in Scotland if she thought the Government at Westminster was moving too quickly.

"If, and it is an if, I'm not saying that we're likely to get in to this territory, the UK Government took decisions that I thought were premature in terms of coming out of the lockdown then clearly I would want to make sure that Scotland did what I judged was best to protect the population," she told The Andrew Marr Show.