Taoiseach Leo Varadkar has said paid leave will be provided for partners of healthcare workers who work in the public sector to allow them to provide childcare at home.

He said that the measure has been approved by National Public Health Emergency Team (NPHET) and will be rolled out in the coming weeks.

However, he acknowledged that this would only work for public sector households.

He said it was not an answer for a couple where both are healthcare workers or in a situation where one works in the private sector and the other works in the public sector.

The Taoiseach said NPHET still has reservations about childminders going into people's homes and are not happy for it to be done now.

However, he said it is something that could kick in on 5 May as part of a general easing of restrictions.

The Irish Nurses and Midwives Association criticised the new plans, saying they will do nothing for the vast majority of nurses and midwives.

The INMO said many nurses and midwives are lone parents, or have partners also working on the frontline, or do not have partners who are in the public sector.

Taoiseach @LeoVaradkar says paid leave will be provided for partners of healthcare workers who work in the public sector but don't work in health to allow them to stay at home to provide childcare. He says that has now been approved by NPHET @rtenews pic.twitter.com/w8BTlpB3Q7

The union Fórsa said the Government's plan falls short of what is required to assist essential health staff and maximise the numbers available in hospitals and nursing homes.

The union, which represents 30,000 health workers, said "the plan was a partial solution that would not help those hit hardest by childcare difficulties single parents, and families where both adults are essential workers. Neither will it assist health workers whose partners have jobs in the private sector".

Earlier, Mr Varadkar also said that major gatherings would be among the last things to return to normal due to the difficulties of social distancing.

He said the roadmap to the lifting of restrictions is not completed yet but would be shared with the Irish public before 5 May.

On the EU, he said Europe needs a stronger economic response from the EU to Covid-19 than they have had to date.

He said there would be a European Council meeting tomorrow which would focus on the EU's economic and health response to the pandemic.

"That's what we will be focusing on tomorrow; how we can use the EU's financial firepower to assist countries in real trouble."

All EU countries would need help to get their economies back on track, he added. 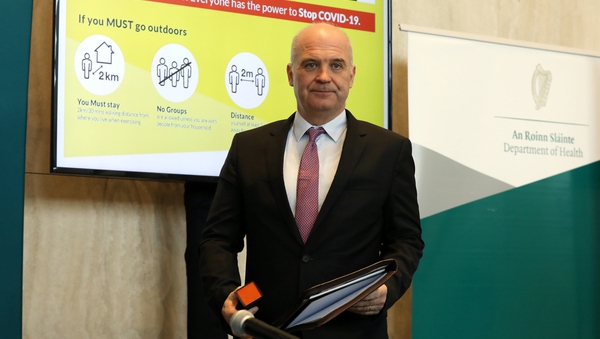