Pope Francis broke with centuries of tradition to livestream Easter Sunday mass to those suffering in the solitude of a coronavirus lockdown that forced the world's Catholics to improvise on their holiest day.

The 83-year-old pontiff spoke to the world's 1.3 billion Catholics from a hauntingly empty St Peter's Basilica at a ceremony attended by just a handful of priests and a small choir that was spaced out across the marble floor.

The pandemic raging outsides the Vatican's locked gates has killed more than 109,000 people and left billions confined to their homes.

The pope's message was livestreamed for the first time -- a bow to technology in the face of a new illness that has changed the shape of society and altered the way religion is observed.

"For many, this is an Easter of solitude lived amid the sorrow and hardship that the pandemic is causing, from physical suffering to economic difficulties," the pope said quietly.

A handful of priests and a few faithful also gathered at the Church of the Holy Sepulchre in Jerusalem's Old City -- locked down like the Vatican -- to say prayers at the spot where Christians believe Jesus was crucified and resurrected on Easter.-

The pope urged the world's leaders to put aside their political fights and call back their armies during a global health emergency of a magnitude not seen in 100 years.

"This is not a time for division," Francis said.

"May Christ enlighten all who have responsibility in conflicts, that they may have the courage to support the appeal for an immediate global ceasefire in all corners of the world."

He said health considerations required world powers to ease crippling economic sanctions imposed against their adversaries -- a possible reference to those weighing over pandemic-hit Iran.

"In light of the present circumstances, may international sanctions be relaxed, since these make it difficult for countries on which they have been imposed to provide adequate support to their citizens," Francis said.

He called for a "reduction, if not the forgiveness, of the debt burdening the balance sheets of the poorest nations" and for European nations to show the same "solidarity" they did in the wake of World War II.

"After the Second World War, this beloved continent was able to rise again," he said.

"The European Union is presently facing an epochal challenge, on which will depend not only its future but that of the whole world."

The pope's virtual Easter Sunday message was just the most vivid example of religious improvisation in the age of social distancing and confinement.

The faithful have already followed his advice and found creative solutions.

The archbishop of Panama took to the air and blessed his tiny Central American nation from a helicopter. The faithful in Spain blasted religious music from their balconies during Holy Week.

A parish near the Philippines' capital Manila pasted the empty pews with family photos that the faithful had emailed to the priest.

"Those photos are the representations of the people who are watching and attending mass through livestreaming, so we also feel their presence virtually," priest Mark Christopher De Leon said.

The scale of the unfolding tragedy has seen a New York City cathedral replace rows of wooden seats with hospital beds in case the surrounding emergency wards get full to overflowing.

The Catholic Church in the Philippines is urging the faithful not to kiss the cross. Its Orthodox counterpart in Greece is planning to hold mass behind closed doors for its Easter on 19 April.

"That's not happening this year."

Jews across the world did their best by using Zoom or other video conferencing apps to "seder-in-place" when the eight-day Passover holiday started on Wednesday evening.

Westminster Abbey in London is following the technological trend by releasing Easter podcasts for the faithful of the Anglican Church.

Priests at France's Catholic shrine in the southwestern town of Lourdes began relaying nine consecutive days of prayers by Facebook Live and YouTube.

The pope himself has in previous years observed Holy Thursday service marking Christ's last supper by washing the feet of 12 inmates on the outskirts of Rome.

The virus has now made this impossible.

Francis instead said a prayer for the dozens of priests and health workers who have died across Italy while attending to the sick since the outbreak began in the Mediterranean country's north in February. 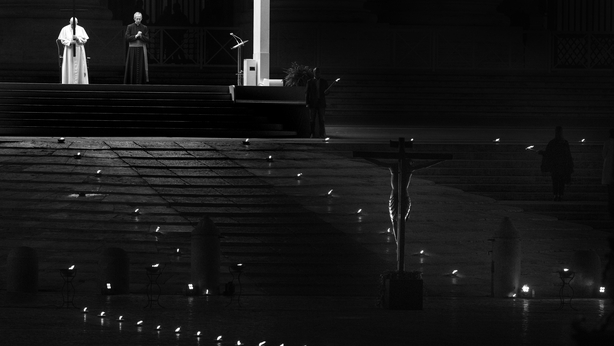 "They are the saints next door, the priests who gave their lives by serving," Francis said.

He invited five nurses and doctors to accompany him for the Good Friday processions in order to highlight their profession's sacrifices over the past month.

Francis himself has reportedly been tested twice for Covid-19 since coming down with a cold at the end of February.

He told the Catholic newspapers that people across the world could try to spiritually escape their confinement through introspection.

"So, to be in lockdown, but yearning, with that memory that yearns and begets hope," the pope said.

"This is what will help us escape our confinement."