"The first WhatsApp All-Ireland". That's the term used by Mike Finnerty, of The Mayo News, to describe the build up to this evening’s football decider.

Instead of the usual conversations in pubs, cafes and streets around the country, he points to social media, as the place where much of the debate has been taking place this week.

In a county where football permeates all aspects of life, there are no fans making early morning departures for Croke Park today.

The frantic search for tickets for GAA HQ has been replaced by a WhatsApp message doing the rounds: "Anyone swap a sitting room ticket for 2 kitchen standing?"

It’s a different type of build up, but it’s not hard to uncover the long standing sense of hope that Mayo people everywhere experience, come the business end of the championship.

And with the usual meeting points out of bounds, schools around the county are the places where there’s been a collective outpouring of support.

Many new versions of old Christmas classics have emerged from music classes, as songs and poems like 'Santa Claus is Coming to Town' and 'The Night Before Christmas’ are reworked to reference Sam Maguire and football related seasonal gifts.

He’s a teacher at Breaffy National School, outside Castlebar, where four past pupils are on the Mayo panel.

He explains how the All-Ireland series has served as a distraction for children and adults alike this winter. It’s given people a chance to focus on something normal, in this most abnormal of years.

After countless final appearances marked with heartbreak, frustration and what could’ve beens, many joke that it would be just like Mayo to win the All-Ireland this year.

In a time when supporters cannot see the game in person and in the week before Christmas. 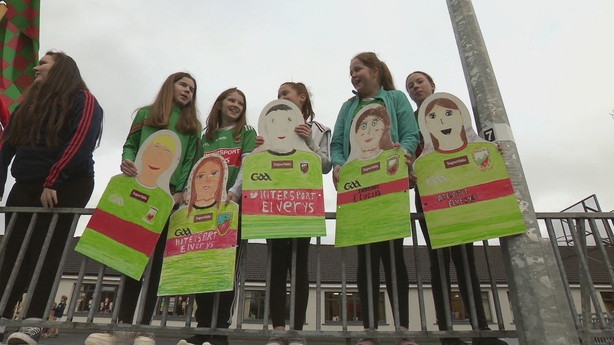 It is also an era where many pundits suggest Dublin’s footballing superiority means a sixth title on the trot is a done deal.

Mayo fans know the world will keep turning whatever happens tonight, but they believe and hope too.

The county will see a unity of purpose this evening that you would be hard pressed to find anytime, anywhere else.

A concoction of memories, dreams, history and place combine to imbue a sense of togetherness when it comes to football.

"We’re in this together" has been a phrase used throughout the pandemic. It was attached to the Mayo football journey long before 2020.

And while WhatsApp messages, dark humour and difficult times are all part and parcel of this year’s voyage to the final, there’s one question that's been constant here for decades: "What if?"

This evening provides another opportunity to find out the answer to that one.