Over 1,000 people have taken to Main Street in Oughterard, Co Galway, to highlight their opposition to possible plans for a Direct Provision centre in the town.

A silent procession was organised by a group opposed to the possible setting up of a centre for asylum seekers at the former Connemara Gateway Hotel.

The Department of Justice has not confirmed whether or not it plans to locate a centre in the town. 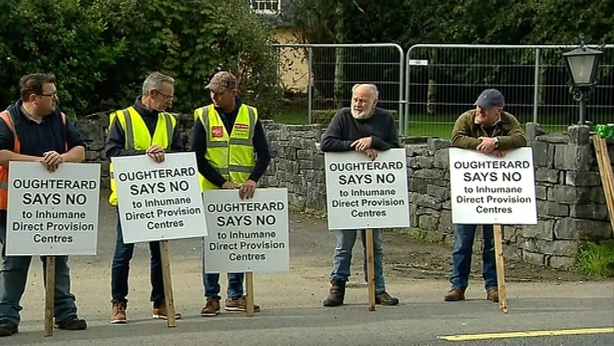 Residents are frustrated with the department over what they say is a lack of communication regarding plans for the former hotel.

Those taking part in today's procession say they have no issue with asylum seekers; their issue is with the system.

They say Oughterard does not have the facilities to accommodate a large influx of people.

The Galway Anti Racism Network has said it stands with those who marched today against what it describes as the inhumane Direct Provision system and how it treats asylum seekers.

The Network says it hopes the Department of Justice and the Reception and Integration Agency take this mobilisation seriously and see it as a strong opposition to what the network calls their policy of running a secretive tendering process that keeps both rural communities and people seeking international protection in the dark.

The statement says that the network is very concerned about anti-immigration outside actors infiltrating what it says is a legitimate protest movement.

The network has also called for TD Noel Grealish to apologise for comments he made about asylum seekers earlier this week.

Rally held in Galway to protest against homelessness