A stone plaque with the words of the song Galway Bay has been removed from the promenade in Salthill, on the shores of Galway Bay, following complaints about an Irish language translation of the world famous song.

The stone was unveiled as part of a poetry trail around the city last year and featured the lyrics from the song, along with Irish, Latin and French translations.

Galway City Council removed the plaque after An Coimisinéir Teanga received a complaint about the standard of the Irish language translation.

A plaque has been removed from the Salthill promenade in Galway following complaints about the Irish translation pic.twitter.com/UnoSGAcAy8

It had been positioned on Seapoint Promenade and was one of 20 such cultural points at various locations, with poems or songs linked to the city and its environs.

Works by Seamus Heaney, Paul Durcan and Walter Macken are among those also featured on the trail.

Galway Bay was written by Arthur Colohan and made famous by Bing Crosby in a 1948 recording.

The Irish translation was found among the papers of Sonny Molloy, a renowned Galway businessman and celebrated singer, who died in 2014.

An Coimisinéir Teanga-The Office of the Language Commissioner is charged with overseeing that legislation governing the use of Irish on signage is upheld.

It is understood the complainant expressed concerns that the translation was not a true reflection of the English language version of Galway Bay.

In a statement, the commissioner said the 20 lines of text in Irish contained approximately 40 errors.

Regulations state that text in Irish should be of equal standing to the text in English.

Follow-up correspondence between the commissioner and the local authority eventually led to the sign being taken down and put in storage.

It has remained there since last October and the plaque has not been altered since then. 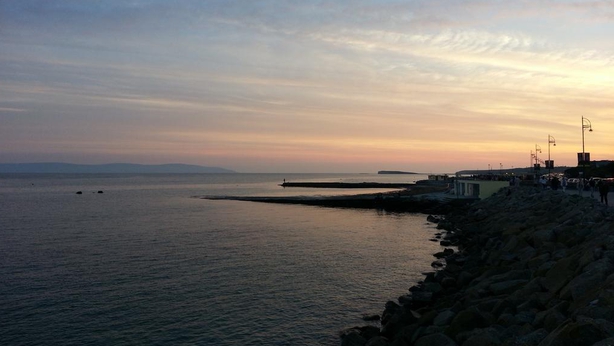 Local historian Tom Kenny, who was given the Irish translation from Sonny Molloy's papers, has expressed concern at the move. He contends that it is impossible to have agreement on a perfect translation of a piece of literature or poetry and that the intervention is counter-productive.

Mr Kenny, himself an Irish speaker, says there are no glaring errors in the version of Galway Bay on the plaque, and that any interpretation of this kind has to take note of the rhythms and flow of the original.

He says he is not aware of any other translations of the song.

The two translations differed in context, style and even name. One was called The Dirty Dust; the other Graveyard Clay.

A review of both books in the New Yorker magazine said they "lay to rest the fable of the 'perfect' translation."

Regulations in the Official Languages Act state that a commemorative plaque can be considered as a sign for the purposes of implementation.

Galway City Council says it is examining options to have the lyrics corrected, with a view to re-erecting the plaque as soon as possible.

It is understood the large limestone carving may have to be divided in four and a new version cut, with a more acceptable translation in Irish.

Commissioner Rónán Ó Domhnaill says he considers the matter closed, as he got assurances from the city council that it would act on the issues of concern.

But Mr Kenny says that instead of promoting and fostering the use of Irish, the intervention has led to a tribute to the famous song and its writer being removed from public view, at a location where it was most appropriate, on the shores of Galway Bay.