US President Barack Obama has said there was evidence that chemical weapons were used inside Syria but questions remained about their use.

Again calling it a "game changer," Mr Obama told reporters that what was still not known is how the chemical weapons were used, when they were used and who used them.

The president said that as early as last year he asked US military to "prepare options" on Syria, but declined to go into details.

He described what is happening in Syria is a "blemish" on the international community.

But he warned that a rush to judgement on the use of chemical weapons in Syria might make it difficult to  mobilise the international community for action.

Meanwhile, at least 13 people have been killed in a bomb attack in central Damascus.

The target of the attack was not immediately clear.

It came a day after Prime Minister Wael al-Halki survived an attack on his convoy in the Syrian capital, in which six people died.

Rebels have increased their attacks on Damascus, which include mortar fire from the contested suburbs, in a civil war that has cost more than 70,000 lives according to UN estimates.

A bomb in July killed four of President Bashar al-Assad's aides, including his brother-in-law Assef Shawkat and the defence minister.

Elsewhere, a Syrian air strike on a headquarters of a Salafist Islamist rebel brigade at the main crossing point with Turkey killed at least five people and wounded dozens, opposition activists along the border said.

The attack targeted buildings belonging to the Ahrar al-Sham, one of the most formidable rebel units fighting to topple President Assad, they said.

A Turkish aid worker said the strike also hit a warehouse storing material for aid groups working in the area. 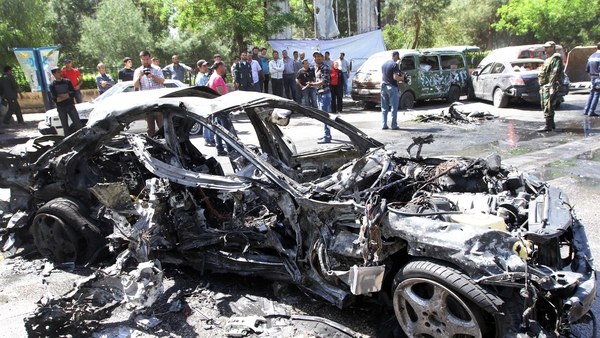