Thousands of empty red chairs filled Sarajevo's main avenue as Bosnians marked the 20th anniversary of the bloodiest conflict in Europe since World War II with songs and remembrance.

The people of Sarajevo remembered the months of shelling by Serb forces that tore the city asunder and urged the world to learn the lessons from the 1992-95 war that killed an estimated 100,000 people.

Thousands of people gathered as a choir and orchestra performed to 11,541 empty chairs on Sarajevo's main Marshal Tito Avenue, one for each civilian killed during the city's siege.

"All those people, look at all the people killed. Look at this river of blood," said economist Mebrura Libric.

People placed white roses on some of the chairs, while on the smaller seats symbolising the hundreds of children killed sat teddy bears, toys and school books.

"It shows the horrors that we lived through," Hazima Hadzovic said.

"I lost so many friends I cannot even remember all of their names now."

The ceremonies were held exactly 20 years after ethnic Serb snipers fired on a peace protest attended by thousands of Bosnians, shattering the last hopes for peace.

6 April, 1992, is the day the European Union recognised Bosnia's independence from the former Yugoslavia - opposed by Bosnian Serbs - and the start of the longest city siege in modern history.

"The world needs to know what happened here to draw lessons for the future," Sarajevo Mayor Alija Behmen said.

For 44 months, Belgrade-backed Bosnian Serbs shelled the town from the hills. Snipers shot at Sarajevans as they stood in line for food or chopped trees for fire and children playing in the streets.

"I mostly recall the near continuous shelling, the snipers, the dead," 64-year-old Fuad Novalija, a craftsman in Sarajevo's old town, said.

"The shells fell when we least expected them. People were killed as they queued for water or bread."

In three and a half years of war - which saw Bosnia's Muslims, Serbs and Croats fight each other - the country was torn apart along ethnic lines. Some 100,000 people were killed and half the population of 4.4 million fled their homes.

It was the 1995 massacre of 8,000 Muslims after the fall of the UN "safe area" of Srebrenica to the Bosnian Serbs that finally led to NATO intervention.

Five months after the massacre - labelled a genocide by a UN war crimes tribunal and the UN's top court, the International Court of Justice - the Western-imposed Dayton peace agreement ended the war. 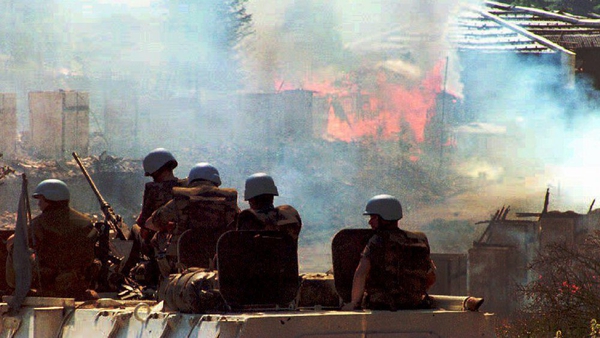