Argos has announced that it intends to close all stores and operations in the Republic of Ireland at the end of June this year with the loss of 580 jobs.

The company said it arrived at the decision following a long period of careful consideration and a thorough review of its business and operations in the country.

"Argos concluded the investment required to develop and modernise the Irish part of its business was not viable and that the money would be better invested in other parts of its business," the company said in a statement.

Argos said the decision will result in the closure of 34 stores across Ireland.

"As part of its consultation with colleagues and Mandate, the recognised trade union, Argos will propose an enhanced redundancy package that goes well beyond its statutory obligations," the company said.

"The small number of colleagues not eligible for redundancy under Irish Law are expected to receive a one-off goodwill payment," it added.

Andy McClelland, Argos Ireland Operations Manager, said it understood that it was difficult news for customers and colleagues.

"As with any major change to our business, we have not made this decision lightly and we are doing everything we can to support those impacted," Mr McClelland said.

Argos stores will remain open to customers in the Republic of Ireland until 24 June. Following today's announcement, it will begin the process of gradually winding down its Irish business.

As part of this, customers in Ireland will no longer be able to pay for orders via the Argos website or place orders via its home delivery service after 22 March.

Orders placed up to this date will continue to be fulfilled and customers will still be able to reserve products online and pay for them in store until the point of business closure.

The aftersales, returns, refunds and exchanges policy will continue to apply until Argos stores close.

The Department of Enterprise said it has not yet received a collective redundancy notification from the company.

The Mandate trade union has expressed its disappointment at the decision. 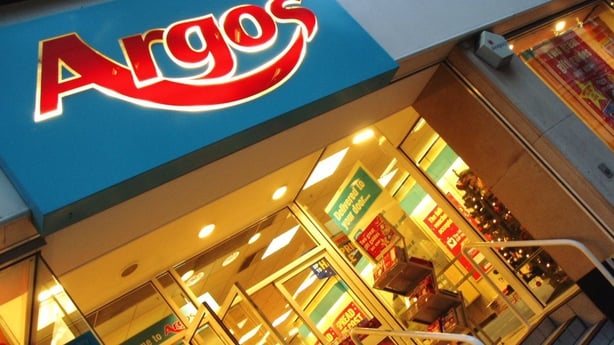 Mandate official Michael Meegan said that the union will be engaging intensively with the company to get the best possible deal for the workers who are being made redundant.

"Today is a difficult one for Argos's staff here in Ireland as they get the news that the company will be closing down here," Mr Meegan said.

"Because Argos is shutting down its complete operation in Ireland this amounts to a collective redundancy which requires a 30-day consultation period and we know the company intends to honour that obligation to engage.

"We will be using this period to negotiate the best possible terms for those who are losing their jobs and we are expecting a constructive response from the company."

Tánaiste Micheál Martin has told the Dáil that "our hearts go to the employees" of Argos with the "shocking news" of the closure of its Irish stores.

He said he will talk to the Minister for Enterprise to ensure everything is done for the employees, to see if any jobs can be rescued, and to explore securing other employment.

Retail Ireland said it was a sad day for all affected.

"The business is a long-standing and valued employer with stores spread across the country," said director Arnold Dillon.

"It is important that everything possible is done to support those who lose their jobs. The sector will work with the Government to identify new employment opportunities over the coming months."

He added that because the sector had faced severe labour shortages over the last year, the association would be hopeful that jobs would be available for those looking for new roles in the sector.

Meanwhile, Retail Excellence Ireland said the news was disappointing and emphasises the fragility and the rapidly changing nature of the retail industry at present.

"Retailers are experiencing their toughest time of year now and many are struggling to keep afloat," the group said in a statement.

"It is critically important that the Government continue to monitor developments and step in with supports if needed in the lean months ahead."

Damian O'Reilly, a lecturer in retail management at TUD, told RTÉ's Today with Claire Byrne that the news regarding Argos was not expected and shows that the company "made a very quick decision".

He said that from reviewing the accounts from last year, sales were down over 21% and the company had a loss of over €13m.

"The company wasn't performing particularly well," he said, adding that the stores were expensive to run in expensive locations and had lots of costs associated with them.

Despite the company having put work into their web offering, he said that people searched by brand or product, so Argos had to reinvent itself and move away from the catalogue as the business model was not feasible anymore.

Sainsbury's bought Argos for £1.1 billion in 2016. Its strategy in the UK has been to close standalone Argos stores, while opening outlets within Sainsbury's supermarkets.

However, the group does not have a supermarket presence in Ireland.

Figures released in December showed that costs associated with the closure of three Argos outlets last year contributed to pre-tax losses increasing four fold at the Irish arm of the retailer to €13.06m.

The closure of three stores over the 12 months reduced the Argos retail estate from 38 to 35 stores and the cost of the store closures was €2.2m. Another store closed after March.

The business recorded a post tax loss of €11.4m after recording a corporation tax credit of €1.63m.