The global economy should avoid a recession next year but the worst energy crisis since the 1970s will trigger a sharp slowdown with Europe hit hardest, the OECD said today.

"Our central scenario is not a global recession, but a significant growth slowdown for the world economy in 2023, as well as still high, albeit declining, inflation in many countries," acting OECD chief economist Alvaro Santos Pereira said.

The OECD said the global slowdown was hitting economies unevenly, with Europe bearing the brunt as Russia's war in Ukraine both hits business activity and drives an energy price spike.

That was slightly better than in the OECD's last outlook in September, when 3.1% growth was estimated for this year and 0.3% in 2023.

It predicted a contraction of 0.3% next year in regional heavyweight Germany, whose industry-driven economy is highly dependent on Russian energy exports - less dire than the 0.7% slump expected in September.

Even in Europe outlooks diverged, with the French economy, which is far less dependent on Russian energy, expected to grow 0.6% next year.

Italy was seen eking out 0.2% growth, which means several quarterly contractions are probable.

Outside the euro zone, the UK economy was seen shrinking 0.4% next year as it contends with rising interest rates, surging prices and weak confidence. Previously the OECD had expected 0.2% growth.

The OECD had previously expected growth of only 1.5% this year in the world's biggest economy and its estimate for 2023 was unchanged. 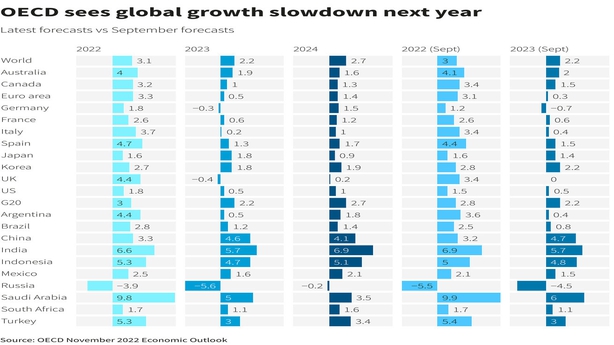 With energy prices likely to remain high, the OECD said central banks should keep raising interest rates to fight inflation, with signs that early hikes in Brazil and the US were paying off.

While many governments had already spent heavily to ease the pain of high inflation with energy price caps, tax cuts and subsidies, the OECD said the high cost meant such support would have to be better targeted going forward.